Mom (and researcher) who started #postcardsforMacron is not angry 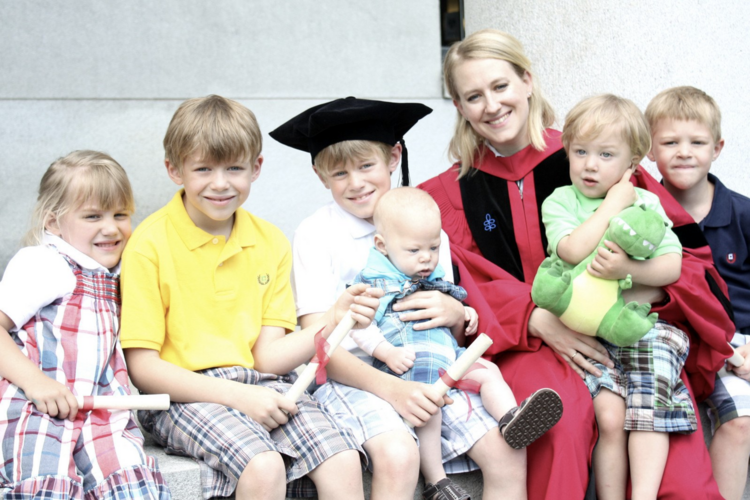 Catherine Pakaluk was already in the middle of a research study on highly educated women with large families when she came across French President Emmanuel Macron’s now notorious comment on large families. (“Present me the woman who decided, being perfectly educated, to have seven, eight or nine children,’” Mr. Macron had said at a Gates Foundation Goalkeepers event in New York on Sept. 26.) In response, Ms. Pakaluk tweeted a picture of herself and six of her eight kids in her graduation attire with the hashtag #postcardsforMacron.

Macron says: ‘Present me the woman who decided, being perfectly educated, to have seven, eight or nine children.' Very well then! The subject of my current research. I'll consider this an invite to send you a copy of the manuscript when done. https://t.co/SC0YurJfAq

Her response went viral and was soon accompanied by tweets from other women sharing pictures of their large families and academic accomplishments. “I had 300-something followers, so I wasn’t expecting like 5 million people to see it,” Ms. Pakaluk said in an interview with America. “I figured like three friends of mine would join in.”

Ms. Pakaluk said her comments were intended to draw attention to her research, not stoke internet outrage. “I was definitely not angry or offended [by Mr. Macron’s comment],” she said. “I viewed it as an opportunity to raise a little bit more awareness that many women, definitely not the majority, but many women who are well-educated still do choose to have seven, eight or nine children.”

“I don’t have eight kids because the church doesn’t believe in birth control.”

Ms. Pakaluk, who currently teaches at the Catholic University of America and holds a Ph.D. in Economics from Harvard University, describes her tweet to Mr. Macron as “spirited” and “playful.” On Twitter, Ms. Pakaluk said she would give a copy of her research findings to President Macron and in an interview with America she confirmed she is going to follow through on that promise once her research is finished.

Ms. Pakaluk was also quick to point out where she and President Macron shared common ground. “I am completely in favor of standing behind any and all credible programs to increase and improve educational access [and attainment] for women—full stop,” said Ms. Pakaluk. “I believe that has always been both the commitment and the triumph of the Catholic Church...way before it was socially desirable and understood to be the right of people.

“I think there is a large lack of understanding [about what] people who have large families experience,” Ms. Pakaluk continued. Indeed, the photos that have been tweeted in response to Mr. Macron have made it more evident to Ms. Pakaluk that many women with larger families feel ignored.

Ms. Pakaluk does not believe that large families in U.S. life are persecuted, “but you get these weird off-hand comments...funny, but typically more offensive comments, like ‘Gee, don’t you know where babies come from.’”

In the coming months, Ms. Pakaluk will continue her research on large families. She intends to look beyond traditional questions related to women in the workforce and ask about meaning and religion in family size decisions as well. She wants to know people’s motives for having large families and what value they see in them. “Religiously affiliated people tend to have more children, and we don’t really know why,” she said.

Ms. Pakaluk said she hopes to eventually broaden the study to include other types of families, like couples who choose to have no children. “I figured I’d start with the group to which I belong,” she said. “So I could have an interesting way of relating the information.”

When it comes to her own family, Ms. Pakaluk is clear on the whys and the why-nots about having a big family, foremost among them: “I don’t have eight kids because the church doesn’t believe in birth control.”

A general appreciation for life that led her to start having children in the first place and then the great experiences she had as a mother were the primary drivers of her large family size. “I believe the purpose of life is to give rise to new life. Now, I don’t think that means you have to have eight kids or even that anyone has to have two kids,” Ms. Pakaluk said.

“I did not go into this wanting eight,” said Ms. Pakaluk, adding that before her first child she had planned on having two or three children. “After having a few kids, I distinctly remember thinking: ‘Why didn’t anyone tell me I was going to love this baby as much as I do?’.... It just never seemed like, ‘Wow, we’re done.’”

Emma Winters is a Joseph A. O’Hare Fellow at America.

Being an only child, I can easily see the advantage of being in a large family. There should always be large families that bring in more variance in human psychology. It's still a crap shoot because I've known large families with lots of sibling conflict. But, all in all, they're a good thing as long as the average reproductive rate is replacement level or below.