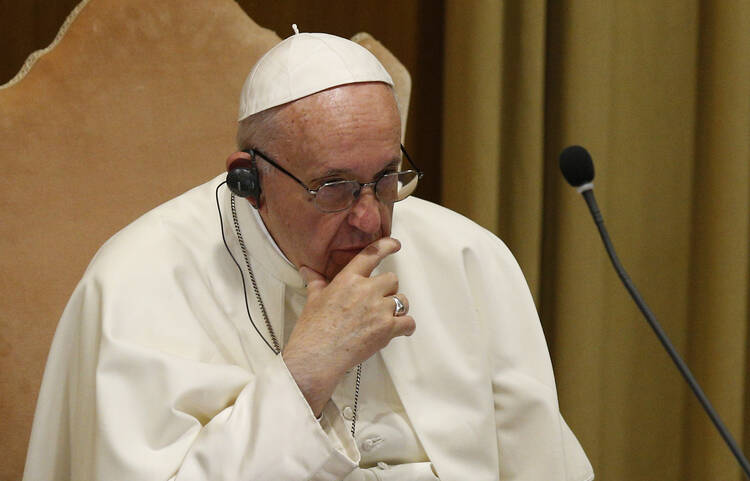 Pope Francis attends the Synod of Bishops on young people, the faith and vocational discernment at the Vatican Oct. 9. (CNS photo/Paul Haring)

“If young people and their families are asking themselves: Can our priest and bishop be trusted? If priests themselves are afraid to minister among the youth, then how can our synod get out the message that young people, their faith and their vocational discernment are important to us?”

These were among the questions raised in the first round of working group reports that were presented before the synod on young people moved into its second phase. Sexual abuse, digital culture and creating a listening church were subjects raised within the four English-language working groups in their initial reports.

The next phase of the synod will focus on Part II of the working document that deals with “Interpreting: Faith and Vocational Discernment,” and like the first phase, it will involve both plenary sessions, where bishops speak to different aspects of that part of the document, and subsequent discussion in the 14 working groups. Their work will again end with the production of group reports.

The 14 groups presented their reports to the plenary session on Oct. 9, and the Vatican later released the full texts. The reports contained their comments on Part I of the working document and suggestions for proposals that could be included in the revised text.

A summary of some of the main points of the four English-language groups is presented here, but this report does not in any way claim to be exhaustive.

English Group A, chaired by Cardinal Oswald Gracias, the archbishop of Bombay and president of the Catholic Bishops Conference of India, suggested that “the faith dimension, the Christological perspective could be stronger” in that part of the text “to make clear that we are reflecting from the heart and in the light of faith on the concrete realities of young people.”

English Group D, chaired by Cardinal Daniel DiNardo, the president of the U.S. Conference of Catholic Bishops, moved in a slightly different direction by suggesting that “the document should commence, not with sociological analysis, but rather with a Biblical icon that would serve as a leitmotif for the entire statement,” such as Jesus’ encounter with the two disciples on the road to Emmaus.

English Group C, moderated by Cardinal Blase Cupich, the archbishop of Chicago, proposed that the synod send “a simple, direct, honest message” to the young people of the world that “should be inspirational and missionary, scripturally based and start from Christ.” The group called for an apostolic exhortation by Pope Francis, accompanied by an interactive aid to facilitate reading it. They also called for the inclusion of quotes from young people at the synod in the final text.

The English-language groups, which include women and men from Africa, Asia, North America, Europe and Oceania, spoke about “the digital world” that is an integral and permanent part of the life of young people today. Group A called for “a more thorough reflection” on this subject, including “its potential for mission and new evangelization” and “the opening up of online educational opportunities.” It also expressed concern about “the exploitation of young people online.”

Group C asked the key question: “How can we create a listening culture in the church?”

Group C, chaired by Cardinal Joseph Coutts from Pakistan, spoke of how “the digital environment” allow for new forms of expression but also reminded people that “lots of youths don’t have access to the internet.” Group D highlighted the prevalence of “the digital culture” and noted that the immersion in the virtual world has produced a kind of “digital migration,” that is, “a wandering away from family, cultural and religious values into a world of privacy and self-invention” that can lead to experiencing a kind of “rootlessness.” All the groups wanted a more focused and substantial reflection on this subject.

All groups emphasized the need “to listen to young people,” who want to be “active participants” in society and the church, not just “spectators.” Group A said, “Our listening and attention to them must be one which engages them in the process of ‘synodality,’ both locally and at all levels of the church.” Group B also emphasized the need to recognize “the indispensable role of young people as active agents in the life of the church and society.” It noted that in Asia, young people are already playing this active role “in the areas of ecumenism and interreligious dialogue.”

Group C asked the key question: “How can we create a listening culture in the church?” It reported that Brother Alois, the prior of the Taize community, said they do a lot of “listening with humanity” at Taize. He asked: Could we have “a ministry of listening”? Group D reported that some in the group asked “whether the strong emphasis on listening didn’t compromise or underplay the church’s authentic teaching mission,” but it said “an elder” in the group insisted that “we move away from any antagonistic construal of the relationship between listening and teaching, as if the two were in competition.”

“Perhaps the storms we are enduring in the church can help us walk more humbly with our young people.”

The question of the sexual abuse of minors and its impact on the church and on evangelization surfaced in many discussions. Group A said that “the issue of child sexual abuse in the church cannot be skimmed over tangentially in a few short sentences” in the synod document. “The shattered trust, the trauma and lifelong suffering of survivors; the catastrophic failures in case management; the continued silence and denial by some of these awful crimes and sins—these issues cry out to be named openly by the synod.” It said that “as well as reassuring young people and their families that our safeguarding processes and norms are now robust and stringent, this synod also provides an opportunity for us to prepare for February 2019 by speaking from our hearts about how we, as synod fathers, feel about this shocking betrayal of our youth and of all the faithful. We should not be afraid to do so.”

It quoted one member of the group who said: “Trust arrives slowly, on foot, but trust leaves on horseback! Trust must be rebuilt, one person at a time.”

It said, “perhaps the storms we are enduring in the church can help us walk more humbly with our young people, to listen to them with understanding and with empathy.” Young people wanted a church that “witnesses to authenticity on the path to holiness, which includes acknowledging mistakes and asking for forgiveness. Young people expect leaders of the church—ordained, religious and lay—to be the strongest example of this.”

Group C added that “while young people may see failures in the prophetic side of the church, in a more positive way they want to see the church as a place of honesty, safety and impartiality.”

A church that cannot be trusted is simply incapable of reaching out to young people in an effective way.”

Group D said it discussed the sex abuse crisis in the church “especially regarding its effect on the evangelization of the young.” It stated frankly that “this scandal has undermined the work of the church in practically every way, precisely because it has compromised our credibility.... A church that cannot be trusted is simply incapable of reaching out to young people in an effective way.”

It asked that the treatment of this topic be “considerably expanded in the final report.” At the same time, it said that “even as we acknowledge our sorrow and guilt in this regard, mention should be made of the very positive and effective steps the church has taken since 2002 to address this matter concretely. And we should make it clear that the commitment to reform, in both matters sexual and financial, is operative at all levels of the church’s life.”

As they began this second phase, the Vatican released the names of the 12 members of the commission that will draft the final document of the synod. Five are Italian, four are Latin American, and the other three are from Asia, Oceania and Ukraine.

Why can’t women vote at the Synod on Young People?
Colleen Dulle

Four are ex-officio members by reason of the roles they have in the synod: Cardinal Sergio da Rocha, relator general to the synod and president of the Brazilian bishops’ conference; the two special secretaries to the synod: the Italian Jesuit, Giacomo Costa, S.J., and the Italian Salesian, Rossano Sala, S.D.B.; together with the secretary general of the synod of bishops, Cardinal Lorenzo Baldisseri.

Pope Francis named three additional members: His Beatitude, Sviatoslav Shevchuk, head of the synod of the Ukrainian Greek Catholic Church; the Rev. Alexandre Awi Mello, the Brazilian-born secretary of the Vatican dicastery for the laity, family and life; and the Rev. Eduardo Gonzalo Redondo, responsible for pastoral ministry for vocations (Cuba).

They will work on the synod’s final document, taking account of the input from the 14 working groups and the plenary assembly.

One the most refreshing notes about this synod report was that none of the leaders are US Americans. Cardinals Cupich and DiNardo had some leadership tasks in their respective groups but that was about it....thankfully. It is good to see the other ends of the world leading

“the Vatican released the names of the 12 members of the commission that will draft the final document of the synod. Five are Italian, four are Latin American, and the other three are from Asia, Oceania and Ukraine.”

The synod should not limit their appeal to emotional matters: trust, the abuse scandal, listening to the youth, etc. It will fail if it does not engage the youth (and the rest of its members, for that matter) at an intellectual level.

I believe that a root issue underlies the contemporary crisis in faith: harmonising ancient formulations of the faith with contemporary human and natural sciences. For example, the Augustinian view of original sin undergirds theology relating to the cross, redemption, Mary, sexuality, etc. It is not obvious how such theological themes are to be assimilated into a world-view built on contemporary scientific knowledge about matters such as evolution, the expanding universe, human psychology and sexuality.

Until the Church explicitly incorporates into its theology (as articulated down at parish level by the ordinary parish priest) something resembling the Teilhardian synthesis between faith and science, its educated members will hemorrhage away into nones. The challenge cannot be postponed indefinitely.