By pressing Pope Francis to accept his resignation, Cardinal Wuerl does the right thing

By pressing Pope Francis to accept his resignation, Cardinal Wuerl does the right thing 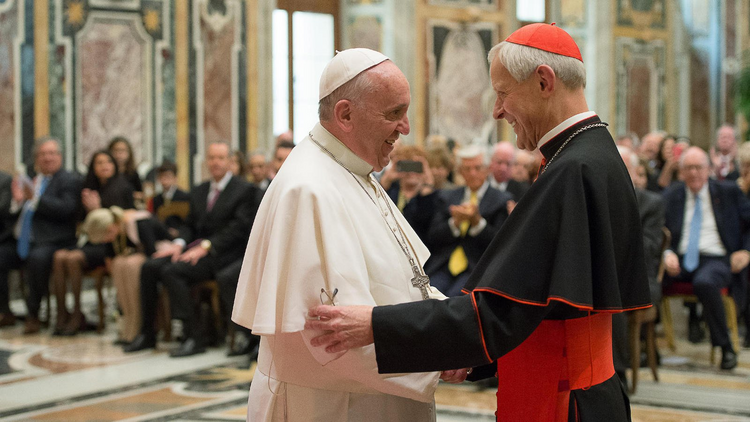 In this April 17, 2015, file photo, Pope Francis, left, talks with Papal Foundation Chairman Cardinal Donald Wuerl, archbishop of Washington, D.C., during a meeting with members of the Papal Foundation at the Vatican. On Aug. 14, 2018, a Pennsylvania grand jury accused Wuerl of helping to protect abusive priests when he was Pittsburgh’s bishop. (L’Osservatore Romano/Pool Photo via AP)

(RNS) — Cardinal Donald Wuerl of Washington, D.C., has done the right thing. He has asked Pope Francis to accept his resignation, which he submitted three years ago when he reached 75, the age at which all Catholic bishops submit their resignations.

The cardinal has been under heavy pressure to resign ever since the Pennsylvania grand jury report was released in August, in which Wuerl was criticized for his handling of abusive priests while he was bishop of Pittsburgh (1988-2006). He is the first U.S. cardinal to resign his archdiocese as a result of the abuse crisis since Cardinal Bernard Law did so in 2002 for his failure to deal with abusive priests in Boston.

Wuerl’s episcopal career began in controversy and now ends in controversy. His first episcopal appointment was in 1986 as an auxiliary bishop in Seattle where the Vatican wanted him to be a check on the liberal Archbishop Raymond Hunthausen. Wuerl was soon transferred to his home diocese of Pittsburgh when his position in Seattle became untenable.

While he was bishop of Pittsburgh, Wuerl got generally favorable reviews for his handling of abuse. In 1988, he was one of the first bishops to meet with survivors of abuse, despite the objections of the diocese’s lawyers. He also refused to return the Rev. Anthony Cipolla to ministry in 1993 when ordered to by the Supreme Tribunal of the Apostolic Signatura, the church’s highest court, based in Rome. Few bishops would have stood up to the tribunal’s powerful cardinals.

Despite this generally good record on abuse, the grand jury report showed that Wuerl still returned some priests to ministry on the recommendation of psychologists who said that after treatment they were safe for ministry. And when he notified the police or other bishops about a priest, he did not always give them all the information he had.

In short, although better than most bishops at the time, he did not always follow the rules in place today.

In asking the pope to accept his resignation, Wuerl did what scores of bishops should have done decades ago.

Although the National Catholic Reporter had been covering clergy sexual abuse since 1985, the crisis first gained national attention in 2002 with The Boston Globe’s exposé. It became apparent that many bishops did not report crimes to the police. In fact, they moved bad priests from parish to parish.

In asking the pope to accept his resignation, Wuerl did what scores of bishops should have done decades ago.

If these bishops had taken responsibility for their actions and resigned, the church would have more easily weathered the crisis. The Vatican, however, resisted having bishops resign under outside pressure. This made it impossible for the church to move on. Only resignations would signal to people that the hierarchy got it.

Wuerl, like many of these bishops, acted out of ignorance in believing it was safe to return some priests to ministry. They thought they could protect children, while at the same time rehabilitating priests and protecting the church from bad publicity. Today bishops know better.

Wuerl is certainly not the worst bishop of his generation in handling abuse. In fact, he was one of the best, but that is still not good enough. Today we have a higher standard.

American Catholics expect their leaders to fully disclose what happened, take responsibility for their actions and resign when appropriate. We expect that from our secular leaders, and church leaders should be held to an even higher standard.

Wuerl has said that after he resigns, he wants to participate in a process of healing for all those who have suffered abuse. If he did nothing else than meet and listen to survivors of abuse, that would be a useful ministry.

"Wuerl is certainly not the worst bishop of his generation in handling abuse. In fact, he was one of the best, but that is still not good enough. Today we have a higher standard."

Cardinal Wuerl is not my favorite bishop; in fact I don't necessarily have a very high opinion of bishops in general, but I think he is being treated unfairly by the lynch mob. I am not sure why this article seems to blame him for the difficult position he was given on his first episcopal assignment. It says something about our leadership that new bishops are sent in to spy on other bishops. How sad.

Certainly, many bishops made terrible mistakes when following the advice of therapists and lawyers. Why is it that we focus on this behavior from decades ago and ignore the ample evidence of his considerable improvement over the past decades? I hope that I am never convicted for mistakes that I made 30 years ago. He is past the age of retirement, let him rest with our thanks for a difficult job he did in the face of considerable obstacles to overcome. Instead of satisfying our need for blood, why don't we put our efforts into making the cultural changes we need? Replacing one cleric with anther will not solve our problems, we need systemic change in culture, not personnel.

Indeed, Cardinal Wuerl did the right thing and asked Pope Francis to accept his resignation. Frankly, all other PA bishops found guilty of sexual abusive coverup and/or the moving of priests around who sexually abused minors should also do the right thing and resign.

However, this is only the tip of the iceberg because the latest revelations of sexual abuse, coverup, and the turning of a blind eye to evidence of sexual abuse involves priests, bishops, cardinals and possibly the involvement of the past 3 popes.

Nevertheless, I seriously question if a national lay-lead impartial committee with Apostolic participation will thoroughly investigate the evidence and accusations in the Grand Jury Report, the Vigano letter and the entire McCarrick scandal including how JP II could have justified promoting him to Cardinal. I say I am skeptical because of the silence of Cardinal DiNardo and Pope Francis, in particular after their meeting in the Vatican.

Catholic deserve to know the full and unadulterated truth and the cancer that has caused this scandal (e.g., a culture of clericalism and moral corruption) must be eliminated. To say the least, the Church needs to institute significant structural, process and juridical reforms now. Merely accepting the resignation of bishops and cardinals is not enough.

A Lay Board must be instituted in each Diocese to keep track of how all monies are spent.

Another Lay Board must be instituted in each Diocese having the power to investigate any
charges made against any of the clergy and religious in the Diocese and to investigate why a Priest or Seminarian was asked to leave the diocese/priesthood/seminary in order to ensure that any who is a "Whistle Blower" is not punished by those who did what they should not have done.

If the Laity are the 'People of God' as Vatican II re-affirmed they are,
then they have to watch over the Clergy/Religious to make sure they do their best
to live out their vows of Chastity/Celibacy and Poverty.