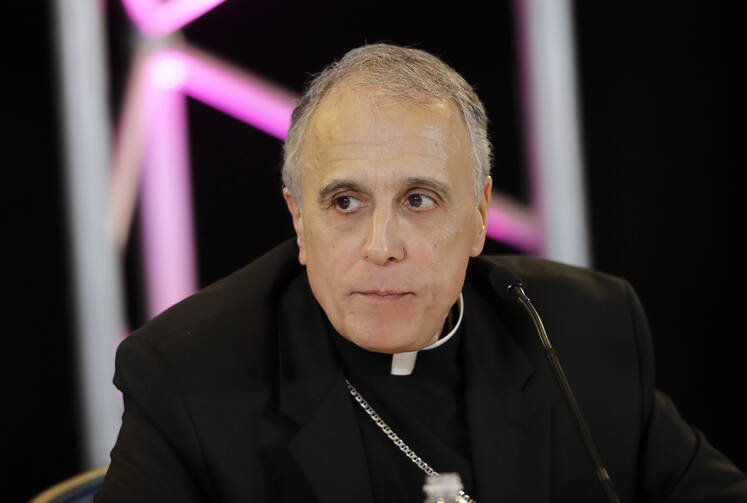 FILE - In this Nov. 15, 2016, file photo, Cardinal Daniel DiNardo of the Archdiocese of Galveston-Houston, the newly-elected president of the United States Conference of Catholic Bishops, speaks at a news conference at the USCCB's annual fall meeting in Baltimore. (AP Photo/Patrick Semansky, File)

HOUSTON (AP) — As U.S. Catholic leaders head to the Vatican to meet with Pope Francis about a growing church abuse crisis, the cardinal leading the delegation has been accused by two people of not doing enough to stop a priest who was arrested this week on sexual abuse charges.

The two people told The Associated Press that they reported the priest and met with Cardinal Daniel DiNardo of the Archdiocese of Galveston-Houston. One of them says she was promised in a meeting with DiNardo, several years after she first reported abuse, that the priest would be removed from any contact with children, only to discover that the priest remained in active ministry at another parish 70 miles away.

The priest, Manuel LaRosa-Lopez, was arrested Tuesday by police in Conroe, Texas. Both people who spoke to the AP are cooperating with police.

LaRosa-Lopez, 60, is accused of fondling both people when they were teenagers and he was a priest at Sacred Heart Catholic Church in Conroe. He is charged with four counts of indecency with a child. Each count carries a maximum possible sentence of 20 years in prison.

LaRosa-Lopez is now the pastor at St. John Fisher Catholic Church in Richmond. He is also the archdiocese's episcopal vicar for Hispanics.

The archdiocese issued a statement Wednesday confirming that both people had come forward to report abuse by LaRosa-Lopez, one of them in 2001. The archdiocese said it reported both allegations to the state Child Protective Services, and said it was unaware of any other "allegations of inappropriate conduct involving minors" against the priest. A spokesman for CPS on Wednesday could not immediately confirm if the reports had been made. LaRosa-Lopez did not immediately return a phone message left Wednesday.

"To anyone affected by any form of abuse by anyone who represents the Church, the Archdiocese deeply regrets such a fundamental violation of trust, and commits itself to eliminating such unacceptable actions," the archdiocese said.

In addition to his responsibilities in Houston, DiNardo is head of the U.S. Conference of Catholic Bishops, a position that has made him a prominent figure in the church's response to a new wave of allegations that Catholic leaders covered up sexual abuse. He is meeting with Pope Francis on Thursday at the Vatican.

Both accusers who say they went to DiNardo are now in their 30s. The Associated Press typically does not identify victims in sexual abuse cases, and both people asked that their names be withheld.

One was flown by the church from the West Coast to Houston to meet with DiNardo and the victims' assistance coordinator for the archdiocese. They met at the archdiocese on the afternoon of Aug. 10.

He wrote down notes from the meeting quickly after leaving, and shared a copy of the notes with AP.

"Cardinal seemed dismissive of situation," the notes read. He also wrote down what he says is a quote from DiNardo: "You should have told us sooner."

"It was a dismissive tone," he recalled. "In the back of my head, I was thinking about his comment. I was so mad afterward."

The group Survivors Network of those Abused by Priests, or SNAP, has called for the Texas attorney general to investigate the Houston archdiocese and others for whether they covered up sexual abuse in their ranks.

"DiNardo needs to come clean on what he knows," said Michael Norris, a member of SNAP.

Both victims say they were teenagers when LaRosa-Lopez tried to befriend them over a period before initiating physical contact.

Both victims say they were teenagers when LaRosa-Lopez tried to befriend them over a period before initiating physical contact.

The male victim said he became interested as a teenager in joining the clergy and going to seminary. He started to attend Mass and got to know LaRosa-Lopez. Eventually, he got a job where he worked nights at Sacred Heart as an assistant.

He remembered LaRosa-Lopez being known as "touchy-feely," and that the priest's contact with him became more physical over time: first touching on the arm, then hugging, then a kiss on the cheek.

One night, he said, the priest showed him pictures of young seminarians that "he had a lot of fun with," and tried to take the teenager's clothes off and put his hands down his pants. He pushed back and quickly left the residence. He said he reported the incident to church authorities last year. The archdiocese said Wednesday it was "formally presented" with the allegation in August.

The female accuser said LaRosa-Lopez befriended her during her weekly confession at Sacred Heart. "He basically was my only friend," she said.

The female victim declined to detail what LaRosa-Lopez did, saying only that he touched her inappropriately shortly before Easter, after she had turned 16.

She says her father found out what had happened and the family reported it to the church. Church officials told her that LaRosa-Lopez would be moved.

The archdiocese confirmed Wednesday that LaRosa-Lopez was re-assigned in 2001 to another church, St. Francis de Sales, and then moved in 2004 to St. John Fisher, his current assignment. It would not confirm he was moved due to an abuse complaint.

She eventually resumed going to her church with LaRosa-Lopez transferred to a new location.

But in 2010, she saw a copy of the archdiocese's internal newsletter, which announced LaRosa-Lopez's appointment as vicar of Hispanic ministry. She thought there was a chance DiNardo didn't know about her complaint because it had predated his time in Houston.

She contacted the church and started to meet with a therapist paid for by the archdiocese. Eventually, she met with DiNardo and other top clergy in the diocese. She says they told her that after she had come forward, LaRosa-Lopez was sent to a hospital for psychiatric treatment twice and that would no longer be allowed to work with children.

Then LaRosa-Lopez was brought in for about 10 minutes, she confronted him about the abuse and he apologized.

She says she later discovered that LaRosa-Lopez remained at St. John Fisher, in the presence of children.

Of DiNardo, the woman said, "I'm tired of all of his empty words."

"If he's going to go meet with the Pope and pretend that all of this is OK and his diocese is clean, I can't stand it," she said. "I can't be quiet."

Of DiNardo, the woman said, "I'm tired of all of his empty words."

The Associated Press asked Tuesday to interview DiNardo and other top leaders at the archdiocese. It also submitted a list of questions about both victims' allegations.

A spokesman for the archdiocese declined the interview requests or to address specific allegations about what DiNardo told the victims.

LaRosa-Lopez was not present at Mass in St. John Fisher on Saturday night or Sunday. A reporter who visited both days saw that a parking spot, marked with a sign reserving the space for "Father Manuel," was empty.

Parishioners were told on Sunday morning Mass that LaRosa-Lopez was "at a retreat."

Aug 27th: DiNardo: “The recent letter of Archbishop Carlo Maria Viganò brings particular focus and urgency to this examination. The questions raised deserve answers that are conclusive and based on evidence. Without those answers, innocent men may be tainted by false accusation and the guilty may be left to repeat sins of the past....... how the grave moral failings of a brother bishop could have been tolerated for so long and proven no impediment to his advancement.“
http://usccb.org/news/2018/18-143.cfm

Victims of abuse in Texas to DiNardo: “Hypocrite”

“The archdiocese issued a statement Wednesday confirming that both people had come forward to report abuse by LaRosa-Lopez, one of them in 2001.“
https://www.khou.com/article/news/local/ahead-of-meeting-with-pope-cardinal-dinardo-accused-of-knowing-about-sex-abuse-allegations/285-593459543

DiNardo is one of the most viciously homophobic of Catholic hierarchs in the country. He told RETIRED priests of his archdiocese that, if they said mass for members of the Catholic gay group "Dignity," he would deprive them of health insurance and pensions. He is an evil old hypocrite.

The lavender mafia sends some volleys towards DiNardo to soften him up before he meets the Pope.

if Francis was so ill- informed about where the abuse took place in Ireland that the Minister for Children had to hold his hands for several minutes when first meeting with him in Dublin on August 25 to bring him up to date on the abuse in the Magdalene Laundries and the Mother & Babies Homes, do we have any confidence that he is any better informed on the DiNardo incompetence? who is briefing the Pope? I have less and less confidence that this Pope is an avid seeker of truth, and is mostly about touchy feely love thy neighbor regardless of the crimes being committed under his watch.......I prefer a Pope who is more John Wayne and less Danny Kaye.

Does any one seriously believe that this systemic evil that infiltrated the ecclesiastical leaders of the Church can be exorcised without the evil doers asking for the Laity to investigate and recommend a path forward.?If you still hold to the proposition that the clergy will fix the problem without intervention and oversight, tell me what if amynthing has to happen that might change your mind.

Cardinal DiNardo needs to be investigated by the civil authorities. If found culpable, he should have his cardinalate rescinded, and should be dismissed as president of the USCCB. Whether or not he should hand in his petticoat and frock and be laicized will be determined, I suppose, by the extent of the malfeasance which is established.

DiNardo needs to be investigated by civil authorities and should also have a Coadjutor Bishop assigned to his archdiocese. The hypocrisies by DiNardo are beyond the pale. The victims informed the archdiocese back in 2002 of the abuse and yet DiNardo allowed the priest to not only be a Pastor but also hold the position within the archdiocese under his watch as episcopal vicar of Hispanics. What gall! And for DiNardo to accuse, along with Chaput and Raymond Burke, the Vicar of Christ under the guise of a bogus scandalous arrogant “testimony” by bitter Vigano is so pathetic. No wonder we hate the US Bishops en total!

Wuerl is asking the Holy Father to accept his resignation. All US Bishops should be submitting theirs via FAX, email or twitter post-haste