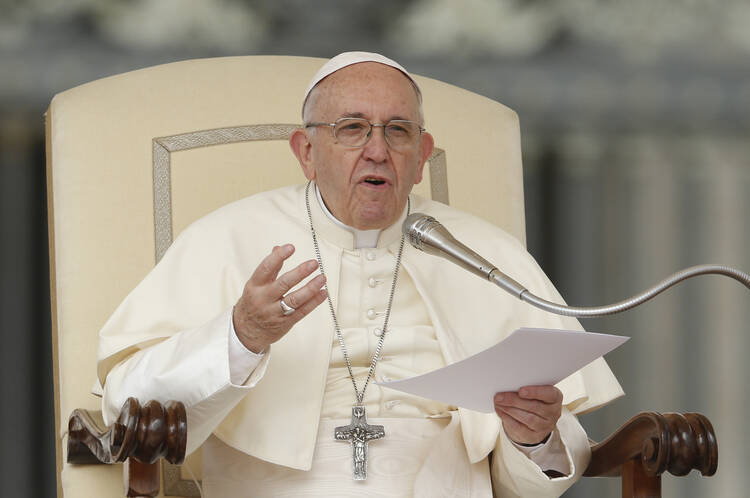 Pope Francis speaks during his general audience in St. Peter's Square at the Vatican on April 18. (CNS/Paul Haring)

In a historic decision, Pope Francis has appointed three women—two Italians and one Belgian—as consultants to the Congregation for the Doctrine of the Faith as part of his ongoing effort to give a greater role to women in the work of the Roman Curia offices, the central administration of the Catholic church.

All Vatican congregations and pontifical councils have consultants who are appointed by the pope. The role of a consultant in the Roman Curia is to give advice or opinions on questions that need to be resolved or to be studied. It is an advisory role, meant to give breadth and focus to a given question. Consultants have long played an important role in the C.D.F.; for example, they have often been called on to give their opinion on a book or an article written by theologians that may have raised questions of doctrine.

“Consultants are invaluable,” a senior Vatican official told America. Until Pope Francis departed from the tradition, consultants of the Vatican congregations have been men. In January 2017, Pope Francis appointed two women to the Congregation for Divine Worship and the Discipline of the Sacraments: Prof. Donna Orsuto (U.S.) who teaches at the Gregorian University and is also director of the Lay Centre at Foyer Unitas in Rome, and Dr. Valeria Trapani (Italy), who teaches in the Pontifical Theological Faculty of St. John the Evangelist in Palermo, Sicily.

In what L’Osservatore Romano called "a historic decision," this morning’s appointments mark the first time ever that women or laity have been appointed as consultants to the C.D.F., the oldest and most powerful of the nine Vatican congregations. Originally erected in 1542 by Pope Paul III to deal with cases of heresy and schism, its competence was redefined by John Paul II in 1998 “to promote and defend the doctrine of the faith and its traditions in all of the Catholic world.”

This morning’s appointments mark the first time ever that women or laity have been appointed as consultants to the C.D.F., the oldest and most powerful of the nine Vatican congregations.

Pope Francis had already appointed Dr. Linda Ghisoni, married and mother to two daughters, as undersecretary for the office for the laity of Dicastery for Laity, Family and Life on Nov. 7, 2017. Born in Piacenza in northern Italy in 1965, she graduated with degrees in philosophy and theology from Eberhard Karls University in Tubingen, Germany in 1991. She gained a doctorate in canon law from the Pontifical Gregorian University in 1990. As a lawyer, she has served in a wide range of roles both at the Vicariate of Rome and at the Tribunal of the Roman Rota, and before being appointed to the Vatican dicastery she was professor of canon law at the Pontifical Gregorian University.

Prof. Michelina Tenace, also appointed today, was born at San Marco in Lamis, Puglia, in southern Italy in 1954. She studied philosophy in Paris, obtained a degree in foreign literature at Rome’s La Sapienza University, and earned a doctorate in theology at the Pontifical Gregorian University, where she teaches fundamental theology and subjects related to anthropology and Oriental Christianity.

The third C.D.F. appointee, Laetitia Calmeyn, was born in Brussels, Belgium in 1975. A nurse who specialized in palliative medicine, she also gained degrees in theology at the Institut d’Etudes Théologiques in Brussels and a doctorate in theology at the Pontifical John Paul II Institute in Rome. She has taught theology at the Colleges des Bernardins, Paris, since 2009, and is a consecrated virgin of the Archdiocese of Paris.

Today’s appointments may seem minor, but they are nonetheless further noteworthy steps in ongoing efforts to make it possible for women’s voices to be heard in Vatican offices where decisions are made.

Could the editors give us more details of the education, faith and history of these women so we can be assured they are representative of the faithful women of the fellowship of all believers?

Why? We don't do that for most prelates right now. Besides, how would a group of men know how to evaluate a group of women anyway? How much worse could it get than some of the pompous twits we see claiming wisdom now.

Phillip--One of them is a consecrated virgin. I have a feeling that is a special category beyond my understanding. Probably yours too?

Sorry but these are not leadership roles. The advice they give can be completely disregarded by the CDF leaders. Either make women cardinals and give them the same voting power as men or it is all just still another role that is "lesser by far than men" and containing no real weight, voice or authority. Women are done with being treated less in any way. We demand priesthood and same exact sacraments as men be restored to us immediately as a matter of human justice. Walk the Walk or don't bother doing the talk. We are done listening to babble. We are done watching leaders pat themselves on the back for more continued sexism.

Nora--you are right, but Francis can only do so much by himself and he cannot say what you can. No one wants prophet for a pope--at least not if they know anything about servant leadership. Prophets rise up from the people. Maybe that's you. If you are speaking what God has told you to speak, then keep doing it. Suggestion: I could be wrong but I am suspicious of self-proclaimed prophets. Just speak and if others start calling you prophetic, you just might be. I, Dominic Deus, have said so. Don't pay attention too me, though. I'm skeptical of myself most of the time.

Dominic Deus here. Great! Now appoint four or five every six months and ask them to answer questions that male clergy have failed to illuminate. Give them their own caucus.

Dominic
I recollect you are frequently self avatared as " Dominic The Physician "
....I suggest you talk with him about reducing your dosage.😇😇

This is a great and very informative post Thanks!
Swantao.com