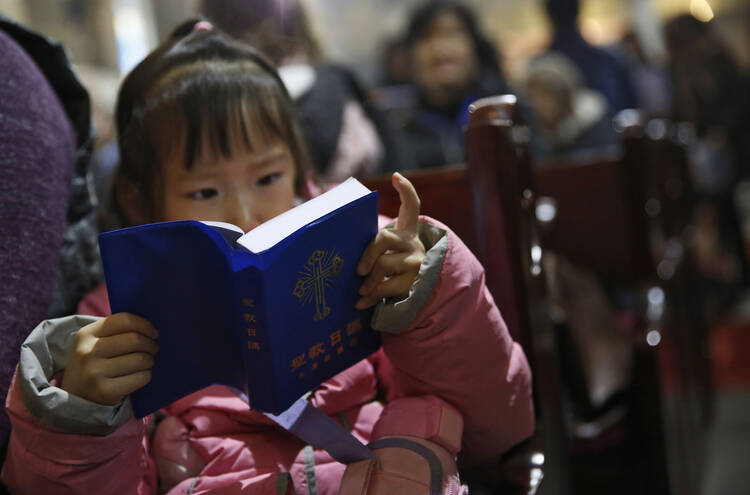 A girl reads a Bible during Mass in the state-approved Xuanwumen Catholic Church in Bejing, China, in December 2016. (CNS photo/How Hwee Young, EPA)

Cardinal John Tong Hon, the seventh Chinese cardinal in the history of the church, is convinced that Pope Francis “is definitely on the right track” in trying to reach an agreement with China on the nomination of bishops.

In an exclusive interview with America, he said that Pope Francis “is assisted by the Holy Spirit; we believe this from the ecclesiological point of view. I have seen the Spirit at work in his election. It’s very clear that the hand of God was there in his election.

“I believe that time will prove he is right, even if it is after his death. History will prove him right,” he said, speaking in Rome on March 20, almost a week before Mindong Bishop Vincent Guo Xijin, a leader of the “underground” church, and his chancellor were detained overnight by Chinese officials at the start of Holy Week. They were later released but Bishop Guo was ordered not to participate in upcoming Masses, according to reports.

The bishop emeritus of Hong Kong said, “Pope Francis promotes the Holy See’s negotiations with China for the good of the church, to bring something good to the church and to the whole of humanity.”

“Pope Francis promotes the Holy See’s negotiations with China for the good of the church, to bring something good to the church and to the whole of humanity.”

Sources told America that the negotiators have only focused on one issue: the nomination of bishops. Linked to that, at China’s insistence, is the question of the legitimization of the seven bishops who were ordained without the papal mandate, including some who were excommunicated.

It is no secret that the Holy See and China are very close to signing an agreement on the appointment of bishops; nevertheless, Vatican sources believe that this will not happen before Easter and may not happen in April. While the two sides plan to meet again soon, no date has been fixed.

Cardinal Tong, who reads the Sino-Vatican negotiations in a very different light from his fellow Chinese cardinal, Joseph Zen, was in Rome for a seventh international symposium on “Christianity in the Chinese Society: Impact, Interaction and Inculturation,” at the Jesuit-run Gregorian University on March 22 and 23.

Speaking to America before the conference started, the cardinal attributed the progress being made by the Holy See in its negotiations with China to three characteristics that are hallmarks of Francis’ papacy.

He recalled that Professor Joseph Jan-Yiu Sung, vice-chancellor of the Chinese University in Hong Kong and a local hero in the fight against SARS (severe acute respiratory syndrome), highlighted these characteristics in his speech at the university’s graduation ceremony in November 2014, when he described Pope Francis as “the model for our future leaders.” He identified the three characteristics: “be humble...be knowledgeable and visionary...be inclusive.”

Cardinal Tong believes these three features “can also be applied to the Holy Father’s attitude to the Holy See-Chinese dialogue.”

Pope Francis’ “humility” is well-known, he said. He said that he was personally struck by it during the conclave when Cardinal Bergoglio was elected pope in March 2013. When the presiding cardinal asked if he accepted the election, Cardinal Bergoglio noted his “surprise” and responded, “I am a great sinner” before giving his assent.

Cardinal Tong said he witnessed the pope’s humility again soon after when, like all the electors, he went to express his obedience to the new pope and presented him with a small bronze statue of Our Lady of Sheshan. Pope Francis responded by kissing both his hand and the statue. A few days later, the pope said that he had placed the statue on his desk and that he prays every day for China.

Everyone knows Francis “is humble,” but sometimes they do not realize that he is also “knowledgeable” about China, the cardinal said. He only discovered this after the conclave when he visited a Chinese Jesuit in Rome, whom he has known since his student days.

His friend congratulated him for having made “a good choice” in electing Francis and informed him that the new pope has had an interest in China for a very long time. His friend recalled that as provincial of the Jesuits in Argentina, then-Father Bergoglio used to come to Rome for meetings at the Jesuit curia and would always ask him about what was happening in China.

The Hong Kong-born cardinal added that Pope Francis has “a big vision” about the China-Vatican dialogue. He observed that some people in dialogue “always want to be the winner, even in small things,” but not Pope Francis; he has “the broader vision” and knows that “the important thing from our side is the reign of God, the Kingdom of God.”

He recalled that as a student in Rome during the Second Vatican Council, he had learned “that the Reign of God, the Kingdom of God, relates to the whole of humanity, that finally we are to be one family under Jesus Christ, and we are brothers and sisters.” Therefore, “in the negotiations, if we do not care too much for the small things, to get a little advantage here and there, then we can achieve a harmonious relationship, and set an example for the whole of humanity, so that all nations can achieve a harmonious relation and become one family and then the kingdom of God will be realized.”

Cardinal Tong said that “in the long run what is reasonable, what is right, what is good for the whole of humanity, will win.”

The cardinal said Francis is following an “inclusive” approach to China. That is, he wants no one excluded, especially the faithful of the underground church community. At the same time, he said, Francis wants “to include the communists as friends,” just as Saint John XXIII did in his day. He said it is important to understand that the basic idea underlying Pope Francis’ vision: “God is the Lord of human history, while today’s rulers are only temporary lords.”

In recent months some have questioned the wisdom of the Holy See’s apparent readiness to sign an agreement precisely at a time when China is cracking down on religion, severely tightening administrative directives on religious groups and imposing harsh penalties for failure to respect the new directives. The cardinal, however, suggested that effort may be “a temporary thing, such as has happened from time to time in the past, like in the days of the Cultural Revolution.”

He expressed his belief that “in the long run what is reasonable, what is right, what is good for the whole of humanity, will win.” He said he shared the view of Cardinal John Baptist Wu—the bishop of Hong Kong from 1974 to 2002. In the face of the adversities of his day, he said Cardinal Wu’s attitude was that “one should see these things as only for a limited period, take the broader vision and the longer future, and not allow ourselves to be limited by certain incidents that happen.”

Cardinal Tong said the new Chinese regulations are only aimed not only at Catholics but at other religions too, including Buddhists and Protestants.

Two days after giving this interview, Cardinal Tong welcomed participants to the symposium that was held in Rome for the first time, in what observers read as a clear sign of an improvement in Sino-Vatican relations. The event brought together religious, academic and political figures from China and the West.

Participants included not only Archbishops Paul Gallagher, secretary for Relations with States, and retired Archbishop Claudio Maria Celli, the Vatican’s top expert on China, but also Bishop Yang Xiaoting, rector of the national seminary in Beijing and vice-president of the Chinese Catholic bishops’ conference (a body not recognized by the Holy See because it does not include the underground bishops). Bishop Yang is recognized by both Rome and Beijing.

In his address, Cardinal Tong emphasized that dialogue “is an indispensable feature in our modern world.” Indeed, he said, “every nation, culture, religion and even individual in this world has their own unique context of living, according to which these form an unique outlook on the world, life, values and norms of living.”

But, he added, “[Everyone] also has to acknowledge their limits” and “this is because all experience is limited by space and time.”

He reminded participants that “if we see only our own reasons, and insist on our own experience as the norm, thereby denying the basis of other people’s experience, then disagreement, quarrels and even wars will be inevitable, whether amongst individuals, communities, nations, states, or religions. As a result, our zeal for pursuing the truth will, ironically, become a chasm for separating us.”

Therefore, he said, “dialogue is an indispensable feature of our world. Whilst affirming our own experience, we must acknowledge and respect the rationality of others’ experience. This is a prerequisite for social harmony and world peace.”

The cardinal, who since 1980 has been executive director of the prestigious Holy Spirit Study Centre in Hong Kong, recalled that “Christianity and Chinese society are currently the largest groups in the world, each with its own profound culture and historical traditions.”

And so, “when we are willing to listen to each other and to feel how each other feels, the experience of the other party will give us a new understanding of the world, life, and society,” which “will greatly enrich our own culture, thereby contributing to the peaceful co-existence of all human beings.” It is what he hopes will result from the Sino-Vatican dialogue.