The Catholic case for Mardi Gras 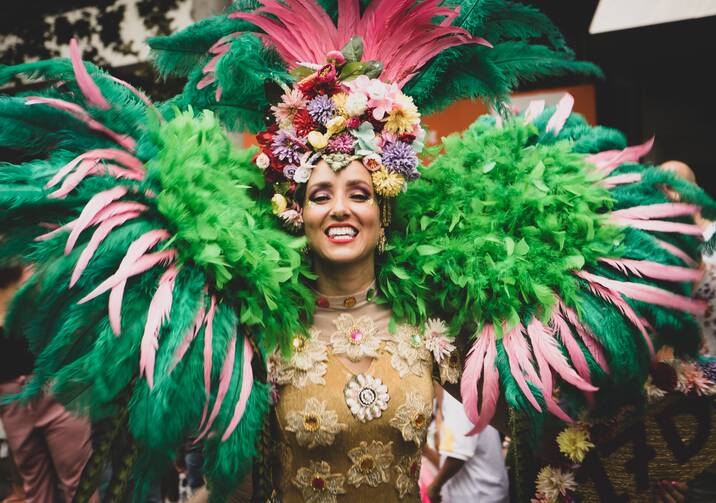 Photo by Ugur Arpaci on Unsplash

This article originally appeared in print under the headline “Concerning Mardi Gras and Lent” in the March 5, 1955 issue of America.

There is a strong, stubborn conviction entertained in the United States that true religion is always an intensely gloomy process. There is also a powerful temptation to find this attitude situated exclusively in the Protestant mind and to mention “puritanism” insinuatingly. But the tactless, undiplomatic fact remains that sometimes a sort of gloomy self-repression, viewed as an end in itself, is, if not taken in as a deserving mongrel through the back door of the Catholic mind, at least given too many pitying handouts. We are terribly aware of the books, plays and movies which we should not touch with a ten-foot pole. But we have a rather dim interest in the books, plays and movies which are an opportunity for us to satisfy our aching desire to be more and more aware of the splendor of the good God as manifested in his created universe.

We know, quite rightly, that if some things are true, other things are not. We know, quite rightly, that if some things are good, others are definitely, indefensibly bad. But we are sometimes too interested in keeping away from bad things just in order to keep away. We forget the reasons for which we do penance, the inevitably joyous reasons. We forget the happy frame of mind in which Robert Herrick said: “Hail, holy feast of Lent.” Sometimes, we almost seem to forget the Church’s audacious, uncompromising championship of the belief that only the Resurrection can explain the Crucifixion. It is particularly ironic when one sees how rapidly she is becoming the only unembarrassed champion of this truth.

We almost seem to forget the Church’s audacious, uncompromising championship of the belief that only the Resurrection can explain the Crucifixion.

And so it is good to stand on Canal Street in New Orleans and watch the Carnival parades go by. And it is good to know that this all got started because New Orleans was and is a Catholic city. (To those who speak of the abuses of Carnival, one might speak of the abuses of democracy. Abolition is too high a price to pay for remedying the abuses of a good thing. A Catholic, particularly, is in no position to argue that man is too depraved to withstand temptation. Individual men are obliged, of course, to remove themselves of their own free will from the occasions of their sins).

And so the parades go by. Sometimes, they can be a busman’s holiday—as when, for instance, I, an English professor, went down to escape from “all that” and found that the night’s subject was “The Plays of Shakespeare.” Sometimes, you seem to have seen it all before. Sometimes, the watered-down drinks that rear up in your path stand as symbols of a cold, clutching human greediness that has nothing in common with Carnival. And also people will stand on your feet.

But Evelyn Waugh noticed (as many have before and since) the doors of the Jesuit church just off Canal on Baronne Street and the crowds that go through them on Ash Wednesday morning. He wrote (as no one else could) how Carnival and Ash Wednesday establish the long extent of men’s joys in this world and their definite, impassable limit. And certainly Catholics, who should be in the very best sense of the term realists, should be aware of the legitimate joys of this world which go far beyond the joys of Carnival and yet of which Carnival itself is a paradoxically noisy-humble part.

For Mardi Gras must end; and yet its joys are right and good, in their time, in their place.

Indeed, we are now in the midst of a sort of triple illustration of this point, with Mardi Gras just over and Lent all about and Easter not too far away—and with the tall peak of Laetare Sunday already bright with the promise of the Resurrection. For Mardi Gras must end; and yet its joys are right and good, in their time, in their place. Lent faces fairly, unsentimentally, with calm, examining eyes, the small sorrows and the bigger ones and, ultimately, the biggest of them all, pain and death, and with no Pollyanna sweetness, but with an awful and splendid conviction. Lent finds that death has been destroyed and that pain, rightly used, leads to joy. And, in this mighty buildup, Easter names the joys that have no term and makes Carnival seem to have been a feeble little squeak of happiness—but a good feeble little squeak.

All of this is a realization in thought and action of the positive character of our holy faith. It is what someday will lie behind the great Catholic novels in our country, and the painting and the architecture and all the bold, but gracefully subordinate, component parts of Catholic culture. For certainly behind all of that reflection of infallible truth in the secular sphere which we call Catholic culture lies a conviction of the positive character of the faith. Even its Ash Wednesdays and its Lents are positive. They clear away the things that clutter up our lives and the desperate parasites that choke; they put the light of contemplation into the dark places of our fears; and, making us athletes for Christ, they discipline our minds and bodies and souls so that they may create and reflect their creator, not that they may die in negative timidity.

We speak disparagingly (and rightly so) of either the slick mediocrity or the downright awfulness of much of our Catholic art in all of its forms. But we frequently seem to think that the remedy lies in doing things in isolation—cleaning up that altar, producing that book, encouraging that mosaic artist. All of this is good. But the remedy is much bigger. It lies (as do all solutions) in looking, not out, but in. It lies in our realizing the character of that which, by the grace of God, we already possess. It lies in our reasserting the positive beliefs of the holy Catholic faith, in understanding that its prohibitions are never ends in themselves, but rather guides to its positive ends.

If it seems odd that all of this should have an affinity with the Krewe of Comus, or the splendid glare of Canal Street, or Folly fighting Death on a float going down Dauphin Street in Mobile, Alabama, or the tall bronze doors of the Jesuit church in New Orleans, it is not odd at all. For Carnival and Lent and Easter belong together; together they ring the changes on the eternal theme.

John Hazard Wildman was professor of English at Louisiana State University from 1940 to 1981.