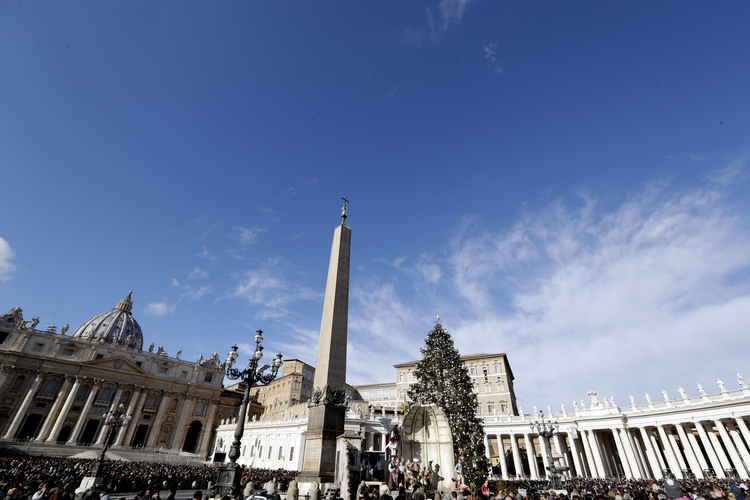 Pope Francis delivers his blessing as he recites the Angelus noon prayer from the window of his studio, background building, overlooking St. Peter's Square at the Vatican, Saturday, Jan. 6, 2018. (AP Photo/Andrew Medichini)

VATICAN CITY (AP) — Pope Francis on Sunday baptized 34 cooing and crying babies in the splendor of the Sistine Chapel, and encouraged their parents to make sure the "language of love" is spoken at home.

With Michelangelo's famed frescoes on the ceiling overhead, the parents — some with other young children in tow — brought 18 girls and 16 boys forward to Francis in the annual ceremony.

The pope then made the sign of the cross on the forehead of each child, and helped siblings do the same to their younger brother or sister. He also recited the name of each child and poured baptismal water over each baby's head.

Many of the parents of the baptized babies are Vatican employees.

Some babies slept, others cooed, and at least one mother gave her baby a bottle of milk. Parents juggled prayer books and pacifiers as they listened to the pope deliver his homily, which he kept short and unscripted.

Francis told the parents that they are tasked with passing on their Catholic faith to their children, stressing that the family is where that should happen.

"If the dialect is lacking, if in the home the parents don't speak that language of love between the two of them, this transmission won't be so easy, it can't be done."

Likening infants' wailing to a concert, Francis told the parents that if their babies start crying later in the ceremony, it's "because they are not comfortable, or too hot, or they don't feel at ease or are hungry." If that's the case, he said, "nurse them, without fear, feed them, because this, too, is a language of love."

I'd love to see some photos of the Pope celebrating Mass in an intimate setting with families. I'm getting tired of the stock photos showing adults, mostly clerics, sitting straight-backed at a Santa Marta Mass and not a child in sight. Was there no official photographer?