How can the Catholic Church advance healing in the #MeToo movement? 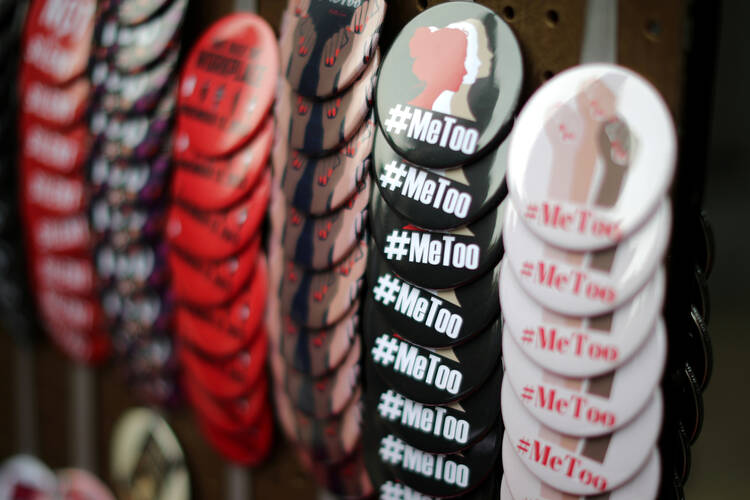 A vendor sells #MeToo badges Nov. 12 during a protest march for survivors of sexual assault in Los Angeles. The wave of accusations of sexual harassment, misconduct and assault from Hollywood to Capitol Hill and many places in between in recent months has been described as a revolution, a moment and a time for national reckoning. (CNS photo/Lucy Nicholson, Reuters)

WASHINGTON (CNS) -- The wave of accusations of sexual harassment, misconduct and assault from Hollywood to Capitol Hill and many places in between in recent months has been described as a revolution, a moment and a time for national reckoning.

The accused -- abruptly fired or resigned -- have issued apology statements or denied wrongdoing. Those who have come forward -- predominantly women, but also some men emboldened by the solidarity of the #MeToo movement -- were named "Silence Breakers" by Time magazine and honored as its 2017 Person of the Year.

"We're still at the bomb-throwing point of this revolution," the Time article points out, stressing that for true social change to happen, private conversations on this issue are essential.

And that's where some say the Catholic Church has something to offer both from its lessons learned -- and how it could do more -- to support victims and foster healing.

The U.S. Catholic Church -- tarnished by the clergy sexual abuse scandal that made headlines in 2002 – has taken steps in all of its dioceses to address and prevent the abuse of young people and will keep doing this forever, according to Deacon Bernie Nojadera, executive director of the U.S. bishops' Secretariat for Child and Youth Protection.

As it continues its training, education, background checks and reporting, the church must similarly "face the reality of sexual harassment," said a Dec. 11 editorial in America magazine, pointing out that what the church went through with the abuse crisis shows "it is possible to begin turning even an organization as large and as old as the church toward primary concern for victims. "

Kirsten Powers worked for Bill Clinton and Fox News. She has some thoughts on sexual harassment.
Jesuitical

But the church faces hurdles in just getting into this discussion, acknowledged Helen Alvare, a law professor at George Mason University's Antonin Scalia Law School and consultor for the Pontifical Council of the Laity, noting that people can accept church teaching on global warming or refugees but its teachings on sexuality "is the thing that gets people mad."

With papal encyclicals such as "Humanae Vitae" ("Of Human Life"), she said the "church was onto something" when it spoke of what would happen when sex was separated from love and responsibility, stressing that if "sex is robbed of its full meaning, it is bound to hurt someone."

And that's what the country is seeing now. As she points out: "We are not talking about women complaining that men stomped on their feet or slapped them really hard, it's sex," which explains the "depth of humiliation and anger" these women feel who have come forward.

"This is not a moment for triumphalism. I don't see anyone in the church taking that approach," Alvare said. "What I do see is people saying: 'Let's look at what's happening, let's name what we're seeing and think about how to fix it.'"

"We're part of that solution," she added, noting that the experience of the church reaching out its hand and saying: 'We're here if you're suffering,' is very powerful."

Part of the church's role can't help but stem from lessons learned in the abuse crisis.

As Deacon Nojadera said: "Clergy sexual abuse should not have happened, but it is part of our history and our landscape" and the church is "healthier and holier" for taking stock of what went wrong and learning to "listen intently" to victims, something he said it didn't do initially.

Part of the church's role can't help but stem from lessons learned in the abuse crisis.

He also knows the current abuse allegations go beyond the worlds of entertainment and politics and are closer to home with people coming forward in recent months under the tagline #ChurchToo to share their experiences of abuse in church environments of all faiths. These victims have often expressed the added pain of being told they did something to bring about the abuse.

He said the Catholic Church needs to help all who have been abused, not just address wrongs of its own past. When he gives talks around the country, people often pull him aside to talk about spousal abuse, domestic violence and bullying.

He told Catholic News Service that the church's policies, adopted across the board in 2002 in its "Charter for the Protection of Children and Young People" put protocols in place for anytime someone calls a parish or diocesan office seeking help with ongoing or previous abuse or assault. For starters, they are offered resources and contact numbers to report the problem.

Dawn Eden Goldstein, an author who has written about finding healing after abuse, said some dioceses and parishes need to do more.

She said if someone contacts a parish priest to say they have suffered abuse, they should not be immediately given a list of local therapists which they could find on their own, or books with "vague platitudes." Instead, she said, victims need clear spiritual guidance and reading recommendations tailored to their specific needs. Most of all, Goldstein said, "they need someone to listen to them with an open heart and say: 'I'm very sorry to hear what was done to you. It wasn't your fault.'"

"They need someone to listen to them with an open heart and say: 'I'm very sorry to hear what was done to you. It wasn't your fault.'"

In short, there needs to be more collaboration, to connect those who've suffered with spiritual care and with priests who are specifically able to help. Victims also need community, she said, pointing out the importance of Catholic outreach groups like the Maria Goretti Network.

Goldstein, who goes by the pen name Dawn Eden and is an assistant professor of dogmatic theology at Holy Apostles College and Seminary in Cromwell, Connecticut, speaks from experience. She was sexually abused as a child and when she became a Catholic as an adult, she said, she was "carrying all of this misplaced guilt," imagining that she should have done something to stop it.

Part of her own path to healing came from the examples of the saints, which she writes about in her book: "My Peace I Give You: Healing Sexual Wounds with the Help of the Saints."

She told CNS that the saints model a path forward for the country's current crisis because they were "bold and courageous in speaking the truth and speaking when they saw people being abused and oppressed in any way."

They also practiced mercy and justice and didn't see a conflict between the two.

For example, St. Maria Goretti -- an 11-year-old Italian girl stabbed in 1902 while resisting a sexual assault -- forgave her assailant on her death bed, but she also gave a detailed description of what happened to her to the police.

As Goldstein sees it, St. Maria Goretti, canonized in 1950, is the "model we need to follow" because she shows those who suffer "that to forgive is in no way to excuse the abuser."