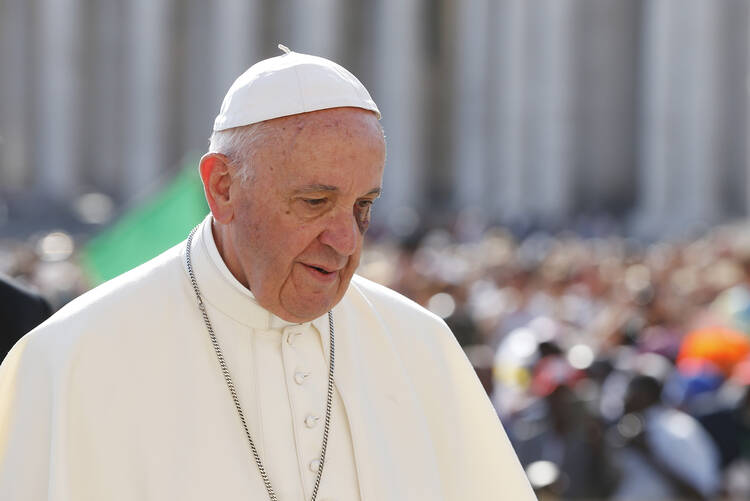 Seeing, understanding and engaging with people's real lives does not "bastardize" theology, rather it is what is needed to guide people toward God, Pope Francis told Jesuits in Colombia.

"The theology of Jesus was the most real thing of all; it began with reality and rose up to the Father," he said during a private audience Sept. 10 in Cartagena, Colombia. The Rome-based Jesuit-run journal, La Civilta Cattolica, published a transcript from the meeting Sept. 28. The journal provided its own translations of the original Spanish remarks.

Meeting privately with a group of Jesuits and laypeople associated with Jesuit-run institutions in Colombia, the pope told them, "I am here for you," not to make a speech, but to hear their questions or comments.

A Jesuit philosophy teacher asked what the pope hoped to see in philosophical and theological reflection today, not just in Colombia, but also in the Catholic Church in general.

Philosophy, like theology, the pope said, cannot be done in "a laboratory," but must be done "in life, in dialogue with reality."

Philosophy, like theology, cannot be done in a laboratory.

Pope "Benedict XVI spoke of truth as an encounter, that is to say, no longer a classification, but a path," Pope Francis said. It always has to be done "in dialogue with reality because you cannot do philosophy with a logarithm table."

The same sort of dialogue, he said, applies to theology, which is not "to bastardize" theology or make it impure. Rather, "quite the opposite" is true. Jesus, who is "the greatest reality" of all, always started with people's real lives to lead them toward God.

"It began with a seed, a parable," a specific incident, and then Jesus would explain, he said; Jesus wanted to do a "deep," profound theology.

"To be a good theologian, in addition to studying, dedicating oneself, having sharp insight and grasping reality," one must reflect and pray "on one's knees," he said.

A man or a woman who doesn't pray cannot be a theologian.

A man or a woman "who doesn't pray cannot be a theologian," he said. He or she may know every doctrine that ever existed and be a walking "Denzinger," the pope said, referring to the 19th-century "Handbook of Creeds and Definitions" by Heinrich Denzinger, "but they will not be doing theology."

It all comes down to "how you express who God is," how the Holy Spirit is manifested, the mystery and "the wounds of Christ," he said. "How you are teaching this encounter -- that is the grace."

The pope then said that he wanted to use the teacher's question as an opportunity address -- in justice and charity -- the "many comments" concerning the postsynodal apostolic exhortation on the family, "Amoris Laetitia."

Many of the commentaries, he said, are "respectable because they were made by children of God," but they are "wrong."

"In order to understand 'Amoris Laetitia,' you must read it from the beginning to the end," reading each chapter in order, reading what got said during the synods of bishops on the family in 2014 and 2015, and reflecting on all of it, he said.

To those who maintain that the morality underlying the document is not "a Catholic morality" or a morality that can be certain or sure, "I want to repeat clearly that the morality of 'Amoris Laetitia' is Thomist," that is, built on the moral philosophy of St. Thomas Aquinas, he said.

One of best and "most mature" theologians today who can explain the document, he told them, is Austrian Cardinal Christoph Schonborn of Vienna.

"I want to say this so that you can help those who believe that morality is purely casuistic," he said, meaning a morality that changes according to particular cases and circumstances rather than one that determines a general approach that should guide the church's pastoral activity.

One must do theology on one's knees.

The pope had made a similar point during his meeting with Jesuits gathered in Rome for their general congregation in 2016. There he said, "In the field of morality, we must advance without falling into situationalism."

"St. Thomas and St. Bonaventure affirm that the general principle holds for all but -- they say it explicitly -- as one moves to the particular, the question becomes diversified and many nuances arise without changing the principle," he had said. It is a method that was used for the Catechism of the Catholic Church and "Amoris Laetitia," he added.

"It is evident that, in the field of morality, one must proceed with scientific rigor and with love for the church and discernment. There are certain points of morality on which only in prayer can one have sufficient light to continue reflecting theologically. And on this, allow me to repeat it, one must do 'theology on one's knees.' You cannot do theology without prayer. This is a key point and it must be done this way," he had told the Jesuits in Rome.

A fairly obscure dissertation from Pope Francis, as usual, not specific and hinting at the evolution of doctrine while saying that the principle remains the same. It's smoke and mirrors stuff from this Pope who is simply confusing everyone with his typically Modernist Jesuit double-speak. And for the Holy Father to dare to assert that AL is based on Thomistic theology and philosophy is just so out the box as to be hardly credible.

The final insult to one's intelligence was the praising of Cardinal Schonborn as the man who best understands the Thomistic nature of AL. This will be the same Cardinal who sat in the Sanctury of his Catedral Church holding a balloon during a sacrilegious balloon Mass. Utterly unbelievable. How much longer, O Lord!

The Nature of Christian Freedom

"Listen! I, Paul, am telling you that if you let yourselves be circumcised, Christ will be of no benefit to you. Once again I testify to every man who lets himself be circumcised that he is obliged to obey the entire law. You who want to be justified by the law have cut yourselves off from Christ; you have fallen away from grace. For through the Spirit, by faith, we eagerly wait for the hope of righteousness. For in Christ Jesus neither circumcision nor uncircumcision counts for anything; the only thing that counts is faith working through love."

Talk of love is phony if it does not recognize the human reality of constant, every day, every hour of every day, so intense in morphs into ideology: sin denial.