There are no Catholics of the 'Left' or 'Right'. Here's why.

There are no Catholics of the 'Left' or 'Right'. Here's why. 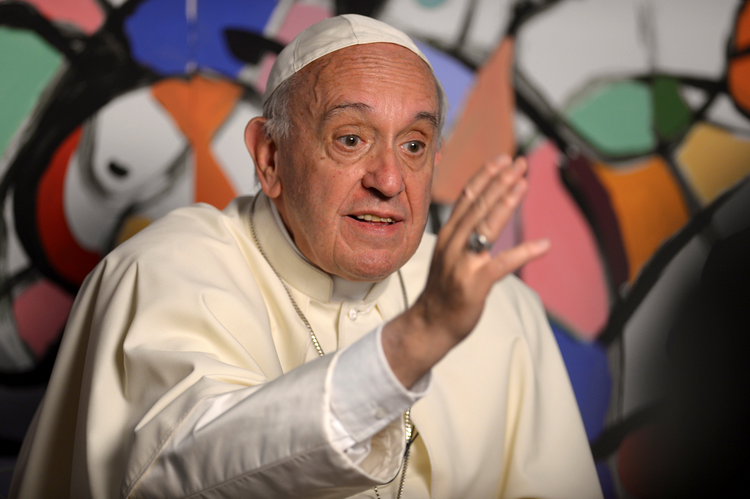 In the United States, toxic partisanship increasingly colors not only our choices at the ballot box but where we shop, what news we read and even how we see the state of the economy. On Pentecost Sunday, Pope Francis reminded Catholics that such political loyalties have no place in the Catholic Church. When Christians “take sides and form parties,” the pope said, “[we] become Christians of the ‘right’ or the ‘left,’ before being on the side of Jesus.”

That is why you do not see the phrases “liberal Catholic” or “conservative Catholic” in the pages of America. This is not because Catholics must be apolitical or centrists or should retreat from the public square. But the church, as our editor in chief wrote in these pages, is not a polis but a communion (“Pursuing the Truth in Love,” 6/3/2013). And in this communion, we are not Democrats or Republicans, liberals or conservatives, citizens or foreigners. We are rather disciples of the one who is truth, the one for whom justice and love are the only standards of human action.

featured comment
Jun 17, 2017
"I have read numerous pieces in the magazine and on the website with which I disagree both politically and religiously. I try to figure out the correctness of my reaction by the standard previously stated. The editors sometimes choose articles that provide alternative viewpoints to the current USA Catholic outlook, which is a far cry from most of the blogs and other Catholic media that I see. There isn’t just one Catholic viewpoint on any topic except on doctrine, and even there, opinions do vary on occasion."
- Vincent Gaglione
View comments
Show Comments (
5
)
Comments are automatically closed two weeks after an article's initial publication. See our comments policy for more.
JR Cosgrove
2 years 8 months ago

I suggest that the editors take no political positions in America. They obviously do by what they choose to publish (see below) and even more so in what they fail to cover. They also do it by who they choose as authors and their topics. They also do so by how they slant the coverage of facts and their failure to provide alternative explanations. And most egregiously they do it by choice of headlines.

Mike Huckabee said a good news article is one where the reader cannot identify the position of the reporter. I suggest the editors make that their publishing position.

So I recommend that the editors listen to what the Pope said and practice it here at America. At the bottom of the current America home page are the following headlines

Are there lessons to be learned from Bernie Madoff in the Trump era?

Donald Trump's sins are our sins, too, and impeachment won't absolve them

As calls for Trump's impeachment are raised, the process remains difficult (as it should be)

All these headlines are specious at best. And there was one recently associating Trump with Voldemort. And there are more. Is there ever a more concrete proof of the political position of the editors and America who rarely consider the opposite political viewpoint.

. Although I was a lifelong member of the Republican party, I am now registered as "not affiliated". After voting for Republicans in 11 elections - I was appalled that Mr. Trump won the nomination, and, due to the flukes in our electoral system, the presidency. I agree with almost every critique of Trump put forth in America. In my 12th election, I could not vote for the Republican candidate even while finding his opponent to be deeply flawed. The lesser of two evils.

I seldom agree with anything Mr. Cosgrove writes. But I do agree with him this time - America shows bias. As related to the current administration, it is a bias I happen to agree with more or less, given the current state of the Republican party. America leans to the liberal side of the political spectrum on most current political issues - with the exception of abortion and contraception.

America's bias is also apparent in the realm of most church teachings, but there it seems more divided - if the teaching concerns social justice issues such as immigration, refugees, environmental concerns, social safety nets for the poor, etc, America is liberal. If the teachings are related to women, women's ordination, marriage, marital sex, and contraception, America shows a strongly conservative bias. Like most Catholics, whether on the conservative wing of the church or the progressive wing of the church, America condemns abortion. America also seems somewhat ambivalent in its stance on church teachings about homosexuality, showing more empathy towards "gay issues" than towards "women's issues".

So, I agree with Mr. Cosgrove that America shows editorial biases - liberal AND conservative depending on the issue- generally politically liberal and generally doctrinally conservative.

Banning the use of the words "liberal" and "conservative' is, to put it bluntly, simply silly. It is a denial of reality - the reality that the same kinds of divisions that are so apparent in the secular political realm are equally apparent in the Catholic church in politics, some current teachings, and liturgy. Americaitself has biases in both realms. Sometimes liberal, sometimes conservative, sometimes ambiguous and ambivalent. It is easier to be honest about it and use the commonly accepted terms for describing different positions on current issues, both in the secular political realm and within the church itself. A utopian vision of Catholics not being "conservative" or "liberal" is simply wishful thinking, and wishing doesn't change reality.

I take as the guiding principle of the editors their last opinion: “We are rather disciples of the one who is truth, the one for whom justice and love are the only standards of human action.”

I have read numerous pieces in the magazine and on the website with which I disagree both politically and religiously. I try to figure out the correctness of my reaction by the standard previously stated.

The editors sometimes choose articles that provide alternative viewpoints to the current USA Catholic outlook, which is a far cry from most of the blogs and other Catholic media that I see. There isn’t just one Catholic viewpoint on any topic except on doctrine, and even there, opinions do vary on occasion.

A previous commenter wrote: “Mike Huckabee said a good news article is one where the reader cannot identify the position of the reporter.” Yep, sounds like the Fox News mantra, “fair and balanced” to me! ( I hear that they have dropped that mantra.) There is no such thing. News reporting always implies a perspective, a bias, even if carefully managed. And very often the articles here have a definite perspective which is clear and obvious. That’s what evokes the comments here, eh!

I think I was fifteen when I tweaked to the fact that the media had a narrative, which was roughly “eventually the proletarian revolution wins over the world, and we’re all happy forever and ever.” This is why most people in Europe thought of Cuba as a paradise well into the eighties; why idiots still adorn themselves with t-shirts of the mass murderer Che Guevara; and why people who’d flinch at declaring themselves fascist don’t hesitate to call themselves communist...

But the United States has always been a thorn in their flesh.

There are those who want their news straight and honest and not fake narratives driven by an ideology which you appear to be espousing.

In my professional career I never saw one story with which I was familiar that was presented in the press in an accurate way. Somebody once on this site suggested I go to CNN and the Washington Post for accurate news which I thought was amusing.

Maybe the editors would be interested in commenting on one of their own who is critical of the pope as too political and uses the word "left."

Jesuit Father Henri Boulad believes that when it comes to dealing with Islam, the Catholic Church has succumbed to a “liberal left ideology which is destroying the West” based on the pretext of “openness, tolerance and Christian charity.” .

I would provide the link but it sends the comment into moderation. So just google Father Henri Boulad National Catholic Register. The particular article is on the Church's attitude towards Islam but it implies it goes a lot wider than that

This article also appeared in print, under the headline “No Catholics of the Left or Right,” in the June 26, 2017, issue.