Pope Francis: the cross is not a badge of belonging 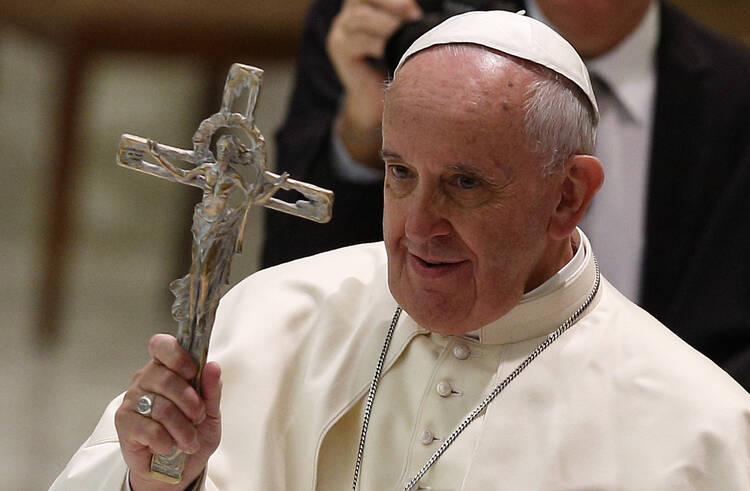 Pope Francis on Tuesday told Christians not to wear the crucifix only as a symbol of belonging but to look to Jesus on the cross as He who died for our salvation. The pope’s words came during morning Mass at the Casa Santa Marta.

Pope Francis noted that in today’s liturgical reading Jesus says to the Pharisees three times: “You will die in your sins.” That’s because their hearts were closed and they did not understand the mystery of the Lord. “To die in your sins” he said, is a bad thing.

Reflecting on the First Reading in which the Lord tells Moses to make a saraph serpent and mount it on a pole and “whoever looks at it after being bitten will live,” the pope said the serpent is “the symbol of the devil,” the father of lies, he who caused humanity to sin.

And he recalled that Jesus said “When you lift up the Son of Man, then you will realize that I am, and that I do nothing on my own.” This, Francis said, is the mystery of the cross.

“The bronze serpent was the sign of two things: the sign of sin and of the seductive power of sin”, and it was a prophecy of the cross, he said.

The cross, he continued, is not only a symbol of belonging, but it is the memory of God who was made sin for love. As Saint Paul says: “For our sake he made him to be sin who did not know sin.”

Taking upon himself all the filth of humanity, the pope said, he was lifted so that all men wounded by sin would be able to see Him.

"Salvation comes only from the cross, from this cross that is God made flesh,” he said.

Then the pope asked: “What is the cross for you? Yes, it is the Christian symbol. We make the sign of the cross, but often we do not do it well.” For some, he said, the cross is like a badge of belonging, they wear it to show they are Christians, or even in search of visibility, they wear it as an ornament decorated with precious gems.

Pope Francis: An 'orderly and comfortable life' is not a life for Christ
Carol Glatz - Catholic News Service

Pope Francis is the third-best leader in the world, according to Fortune
Adelle Banks - Religion News Service

But, he reminded the faithful: "God said to Moses “whoever looks at the serpent will live”; and Jesus said to his enemies “When you lift up the Son of Man, then you will realize that I am the son of God.”

He who does not look to the cross with faith, the pope said, will die in his sins, will not receive salvation. Today, Pope Francis said, the church proposes “a dialogue with the mystery of the cross, with God who became sin for our sake.” “Each of us can say He became sin ‘for love of me’,” he said.

Inviting all faithful to think about how they wear the cross, and how aware they are when making the sign of the cross, the pope concluded asking each of us to look to this God who became sin so that we do not die in our sins, and to reflect on the questions just suggested.