Hollywood has a God problem: How do you film pure consciousness? 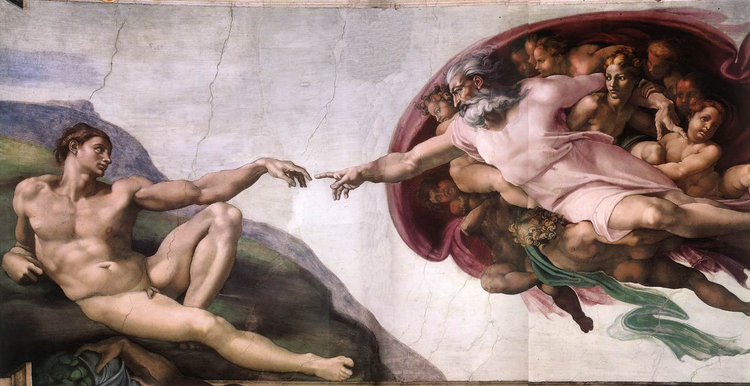 They insisted that he wear the pointy ears. The actor, Leonard Nimoy, complained that the first set was quite uncomfortable and hard to keep on. But would an alien, exactly like us—without the pointy ears and arched eyebrows—still be an alien? If so, then what makes aliens different from Canadians?

Over time, our imaginations stretched with the Klingons. In the original television series of “Star Trek,” they had only grimy faces and bushy eyebrows, but by “The Next Generation,” they had developed swollen and ridged craniums.

Even our more adventurous aliens of the latest “Star Trek” and “Star Wars” movies still follow familiar, biological templates. Why, that’s a dog-like alien, who shoots a gun. Look, a lizard alien. The point is, we don’t want our aliens to be too alien. How would we recognize them? The Dune series had large, amoeba-like aliens, floating in tanks, but, in general, we like to picture sentience as looking a lot like ourselves.

And Hollywood aliens speak good American, though the more exotic, often malign ones, use the Queen’s English. Science fiction has created the concept of a universal translator, a version much more sophisticated than anything that Google currently offers. But what of aliens who wouldn’t think in language at all? The closest we’ve come is “Close Encounters [of the Third Kind],” where the aliens “think” in musical tones.

Let’s be truly radical and imagine an alien so evolved there was literally no biological substrate left. Pure consciousness without any matter. Perhaps dwelling in one of those other universes that modern physics has been forced to postulate to explain the inconsistencies of our own science.

Now there’s a radically “alien” alien. Yes, but we have only used our imagination, science fiction, to arrive at what Christianity calls an angel. It just sounds more reasonable when we picture pure intelligence as eventually evolving from matter.

Notice that these angelic aliens or alien angels are still quite beneath the concept of God. They are pure intelligences but they do not contain their own beginning. They have been produced, if you feel safer speaking in evolutionary terms, or, to use the old word, they have been “created.”

Now, what if there were a form of pure consciousness that had no material substrate? And also had no temporal beginning or end? And what if all matter came forth from this consciousness and is ultimately controlled by it? Now we have come to the meaning of God.

But Hollywood has a problem. How do you film pure consciousness? How do you in any way insert it into a picture of our world? Consciousness that produced the cosmos could be said to contain the cosmos, but it certainly would not appear as one more element, one more thing, within the cosmos.

So the concept of God is both utterly reasonable yet absolutely unimaginable. We can understand what God would mean, but no image or representation that we draw from our material world does justice to God.

One more conundrum: How would that consciousness, which we call God, interact with our human consciousness? We humans communicate our thoughts by means of the material world: sound, touch and sight. The faith teaches that God and the angels communicate without need of these, intuitively, instantly. So how is the gap closed between that form of consciousness and our own biological version?

Perhaps we would have to say that the consciousness, which we call God, does not appear in our world. That would be akin to the novelist, showing up in the novel. Perhaps “divine consciousness” could only be recognized in the same way that we can tell the difference between a 500-page story and 500 pages of gibberish. The mind of the author is revealed in the meaning that we find in the text, or, in this case, in the world.

One final note: I suspect that this utterly alien consciousness would have a tendency to manifest itself where it is least expected.

The people who walked in darkness
have seen a great light;
upon those who dwelt in the land of gloom
a light has shone (Is 9:2).

Why? Perhaps because of who we are—those who seek to know, to classify and to control—this consciousness can only come to us as itself—not under our control, not made into our idol—by constantly surprising us, emerging when, and where, it is least expected.

He left Nazareth and went to live in Capernaum by the sea,
in the region of Zebulun and Naphtali,
that what had been said through Isaiah the prophet
might be fulfilled:
Land of Zebulun and land of Naphtali,
the way to the sea, beyond the Jordan,
Galilee of the Gentiles,
the people who sit in darkness have seen a great light,
on those dwelling in a land overshadowed by death
light has arisen (Mt 4: 13-16).

Yet, just for fun, we could push an angle of unexpected surprise. We could suggest that a God who became incarnate in a manner so unexpected, so easily unrecognizable, might continue to be among us in the most ungainly of ways: Sunday Eucharist.

The Rev. Terrance W. Klein is a priest serving in the Diocese of Dodge City and author of Vanity Faith.

Your question is answered within Hinduism's theistic Vedanta. From the Upanisads: sat chit ananda rupaya krsnaya. "Krishna is the form of eternity knowledge and bliss, or being, knowing, and loving."

The words sat chit ananda together are a concise phrase for describing the nature of consciousness/God. He exists (sat), meaning that he does not undergo material transformations such as birth and death; He is all knowing (chit); He is blissful (ananda) and can thus love or give, being full in himself. And God is the form of sat chit ananda, best expressed within Hindusim as Krishna, the romantic heart of the Absolute. But this teaching is inclusive, as God has many faces, many such forms that require a spiritual eye to see this Beatific Vision. Short of that, we are left with poetic descriptions from those who have seen him in the realm beyond things and thoughts and returned for the moment to try describe him. Hollywood should listen to them!

Incidentally, Christian theologian David Bentley Hart used the term as the subtitle to his book, The Experience of God; sat chit ananda.