When grief sneaks up on you in the grocery store

When grief sneaks up on you in the grocery store 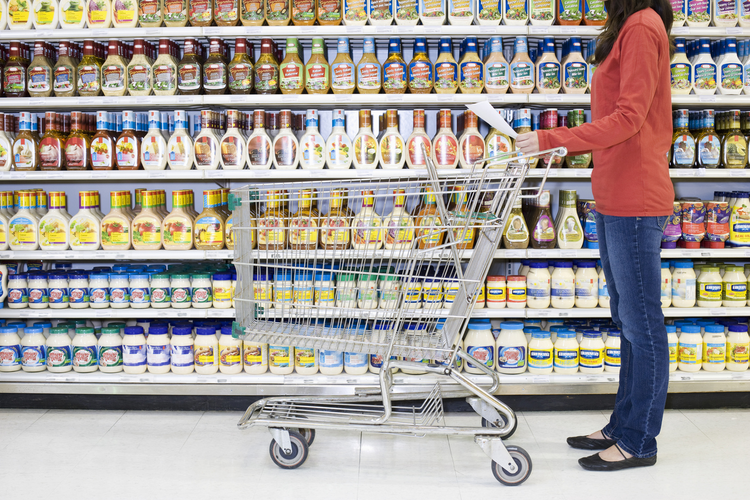 The stages of grief are actually circular, or cyclical, or totally unchartable. Take today. I’m in the grocery store, getting ready to pay with my new “chip” card, which is a little stressful for me, being as new technology often throws me off my game. And a song comes over the P.A. They’re on an early 1970s jag in Albertson’s, because I’ve already heard “Muskrat Love.” But now the Carpenters are singing “We’ve Only Just Begun.” And my heart breaks in a new place as my eyes fill with water.

I get a sudden mental image of a statue of a man and woman holding hands and running. My dad gave it to my mother one Christmas, just after he’d retired. He had a special plaque engraved and adhered to the base of the statue, which read, “We’ve Only Just Begun.” My siblings and I thought it was sweet and a bit silly of him; after all, we were grown-ups and our parents were hardly just beginning. We were just beginning. They were old.

That statue, lovers frozen in a run, sat on the mantle in my parents’ living room until the Northridge earthquake destroyed it. The following Christmas, my dad presented my mother with a similar statue, and a similar plaque, but it was an empty gesture. The magic was gone. Over the years of retirement and failing health, my mother’s mindset had hardened into perpetual disapproval of anything life offered, especially if it came from her husband, and my dad had retreated into his own little routine of contentment. They hadn’t just begun. They were over.

My dad has been dead for seven years now, my mom for seven months. I mourn the loss of my parents; I grieve for my own status as an orphan. But life goes on. Time brings healing. Most days I am able to live in joy and fulfillment, grateful for the extravagant blessings God has bestowed on me. But sometimes there are days, or moments of days, like this tiny slice of time in the grocery store, when regret and sadness and longing for what once was stagger me. My parents found ways to make each other miserable toward the end of their marriage, but they also had times of deep love, when they truly felt that they’d only just begun. That stupid statue was a symbol of hope for them. This stupid song had brought so much rushing back to me. I know that everyone who has ever lost someone is familiar with this blindsiding of grief. It’s a little like a labor pain: it will build, it will crest and the wave of hurt will recede. Until the next one.

People die every day, and every day other people mourn them. Other people cry unexpectedly in the grocery store. The sense of loss when a loved one dies is universal; it transcends language and culture and everything else that separates us. But people are born every day, little ones who’ve only just begun. Life balances death balances life. And even if we plunge from joy to tears, from faith to fear, God will not let us fall off the seesaw.

Show Comments (
3
)
Comments are automatically closed two weeks after an article's initial publication. See our comments policy for more.
Ann Robertson
3 years 3 months ago
"All We Can Do" No words can comfort: all we can do is share your north-face route with you. No-one can take your pain away or cut bereavement's journey short. Perhaps you would not want them to - your grief is all that's left to you of one, so loved, who could not stay. All we can do is walk with you, and try to match our steps to yours. Friends do not need acknowledgement: don't waste your strength to make response - just keep on walking day by day. But let us share that cold road too - to walk a little way with you" By Mary Sheepshanks This has become very meaningful to me in the last few weeks. My brother in law has just lost his partner of 51 years. Our friend of many years has died .My friend is facing her first Christmas without her husband of over 50 years and my cousin, who gave me away at our wedding is now terminally ill. This news came in our Christmas card. It all makes the Mystery of the Incarnation even more meaningful somehow.
Lisa Weber
3 years 3 months ago
These moments are when you learn that God is with you always.
Bruce Byrolly
3 years 3 months ago
Very beautiful article. Thank you. Bruce Byrolly Cambridge MD
Advertisement
More: Spirituality

Pope Francis approves new ‘Mass in Time of Pandemic’ and Good Friday coronavirus intention
“In these days, during which the whole world has been gravely stricken by the Covid-19 virus, many requests have come to be able to celebrate a specific Mass to implore God to bring an end to this pandemic.”
Colleen DulleApril 01, 2020