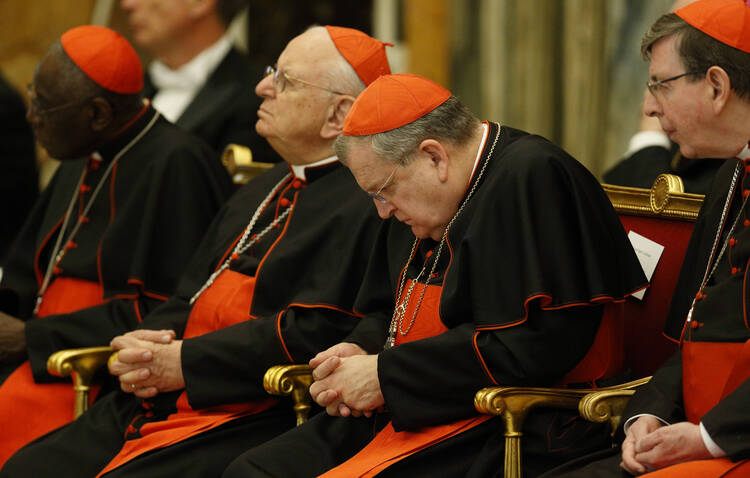 Pope Francis surprised Vatican officials yet again, when, in his closely watched pre-Christmas greeting, he spoke frankly about the reform of the Roman Curia and the “open,” “hidden” and “malevolent” types of resistance that he is encountering to it.

Addressing the cardinals and senior officials of the Roman Curia gathered in the Vatican’s Sala Clementina, Francis dedicated his speech to the ongoing reform of the Roman Curia which, he said, is being done at the request of the cardinals, per their discussions in the pre-conclave meetings in 2013. He listed the 12 criteria that are guiding this reform and the three “types of resistance” he is encountering. And, by way of response to those who allege that little has been achieved, he highlighted the significant progress already made.

This is the third consecutive year in which the Argentine pope has zoned in forcefully on a central aspect of the life of the Roman Curia, the papal civil service. In 2014, he identified 15 “diseases” or “illnesses” from which curial officials can suffer. In 2015 he offered the antidotes to these ailments by listing “a catalogue of the necessary virtues” that they need to cultivate.

This year Pope Francis framed his talk in terms of the spirituality of the incarnation. Describing Christmas as the feast of “the loving humility of God” that upends human logic, he recalled that “God chose to be born small, because he wished to be loved,” and by being small, fragile, weak, “no one would be ashamed of approaching him, no one would fear him.” Francis said this divine logic scuttles “the worldly logic, the logic of power, of command, the pharisaic, the chance or deterministic logic,” and made clear that this is the logic that should inform the life of everyone in Roman Curia and underpin its reform.

“Since the Curia is not an immobile apparatus,” Francis said, its reform—which has occurred many times over the last century—is “a sign of vivacity, of the church on the move, in pilgrimage and of the living church that always needs to be reformed.” But, he insisted, “reform is not an end in itself but is a process of growth and, above all, of conversion.” Its goal “is not esthetic, to make the Curia look beautiful” or to give it “a face-lift or makeup,” or do “plastic surgery to remove the wrinkles.” Indeed, he declared, “it is not the wrinkles that the church needs to fear, but its stains.”

Francis insisted, however, that the reform “will only be effective” if it is done with “renewed” people, not just “new people.” It is not enough to change personnel; it is necessary “to renew spiritually, humanly and professionally” the members of the Curia. “Without the conversion of persons” and “permanent purification,” there is no reform, he stated.

In the reform process, he said, “it’s normal, even healthy, to encounter difficulties,” and today these have appeared in “different typologies of resistance”: open, hidden and malevolent.

The “open resistances” are “often born of good will and sincere dialog,” he stated.  But the “hidden resistances” are “born of frightened or petrified hearts that feed on empty words of spiritualgattopardism of the one who says he is ready for change, but wants everything to remain as before.”

As for the “malevolent resistances,” Francis said these “sprout in distorted minds” and “present themselves when the devil inspires bad intentions (often in ‘lamb’s’ clothing’).” This form of resistance “hides behind justifying and, in many cases, accusatory words, takes refuge for self in traditions, in appearances, in formalities, in the known or in the wish to reduce everything to the personal without distinguishing between the act, the actor and the action.”

Francis was aware that a number of cardinals and curial officials present as he spoke are engaged in such resistance, including Cardinals Burke and Sarah, but he declared “the absence of reaction is a sign of death!” whereas resistance “is a sign that the body is alive.”

Consequently, he said, “the good resistances—and even the less good ones—are necessary and merit to be listened to, received and encouraged to express themselves.”

The Jesuit pope said all this shows that “the reform of the Curia is a delicate process that has to be lived in faithfulness to the essentials.” It has to be conducted with “continuous discernment, evangelical courage, tenacious action, positive silence, firm decisions and much, much, much prayer.” It requires “profound humility, clear farsightedness, with concrete steps forward and—when it is necessary—with steps back.” And it needs to be done “with determined will, vivacious vitality, responsible power, with unconditioned obedience” and “in the first place, by abandoning ourselves to the secure guidance of the Holy Spirit, trusting in his necessary support.”

He reiterated the fundamental need for personal conversion and emphasized the link between the attitude of the person and the community, saying: “one person can bring much good to the whole body, or can damage or make it sick.”

He said the Roman Curia must reflect “the catholicity” of the church and so must recruit its personnel from the entire world, bringing in permanent deacons, as well as lay men and women, not just clerics or consecrated persons. He called for giving value to and affirming “the role of women and of lay persons in the life of the church and their integration into lead roles in the dicasteries (Vatican departments), with special attention to multiculturality.” He insisted, too, on the need for the “ongoing formation” of everyone working in the curia.

He declared that the practice of promoting an individual to remove him from a position (promoveatur ut amoveator) must be “definitely archived,” and denounced it as “a cancer.”

Francis insisted moreover on the need for “rationalization” of the number of curial dicasteries, and highlighted the importance of “coordination” within each office. He underlined the role of the Secretariat of State in coordinating the work of all curial offices, while respecting “subsidarity.”

He concluded by listing the many goals already reached in the reform process, including in the field of Vatican finances and communications, the establishment of two new departments for the service of integral human development and for the laity, the family and life. He recalled, too, the establishment of the commission for the protection of minors; the decrees regarding negligent bishops; and the reform of the process for annulments of marriages.

At the end of his talk, Pope Francis announced that he would give each person present a Christmas present of a book that recalls the talk he gave them in 2014 on the “ills” of the Roman Curia. The book bears the title Tips to Cure the Ills of the Soul; it was written by Rodolfo Acquaviva, S.J., one of the early Superior Generals of the Society of Jesus.

@gerryorome
Show Comments (
10
)
Comments are automatically closed two weeks after an article's initial publication. See our comments policy for more.
Henry George
5 years 11 months ago
I suppose they have been reforming the Curia since it first came into existence. I wish Francis well, but I also wish him humbleness in that he not think that he alone and no one else knows what is right.
Kevin Murphy
5 years 11 months ago
First Francis said I was a "Pharisee." Then I was "too rigid." Now I'm a "malicious resistor." This Pope dislikes anyone who tries to live by the Catechism. In short, he doesn't like anyone who does not buy into his vision of the Church. It's obvious he and his supporters, eg Spadaro. have quite a mean streak. What ails me is when they cite the Holy Spirit as its inspiration.
Kevin Sharpe
5 years 11 months ago
Who's to say that it isn't the Holy Spirit?
Joris Heise
5 years 11 months ago
It surprises me that someone would set the Catechism up against the Gospel. The two do not always agree--and they certainly disagree in tone. I believe with the Pope that we need to lean more towards the tone of the Gospel and its imagery, lessons, and "mystery" (in the sense of the Church) than in the tone of the Catechism which seems to require conformity, rationalizing and a "modernity" that avoids the much more personal, and involved, relationships between God and us. In the Gospels, God is our Father; In the tone of the Catechism, God is much close to an abstraction.
Lisa Weber
5 years 11 months ago
I like what I see of this talk by Pope Francis. The Church needs to progress and more than a few people in the hierarchy are dragging their feet.
Elizabeth Stevens
5 years 11 months ago
Which is to say that even Cardinals aren't perfect?
John Walton
5 years 11 months ago
This is a case when one would (hopefully) engage McKinsey, BCG or Booz Allen to render advise on revitalizing an atherosclerotic management organization. All (hopefully, again) of the principals are well intentioned, but the carapace awaits collapse. My rec -- a quick call to Cardinal Dolan for a few names who would discretely fill the bill.
Jim MacGregor
5 years 11 months ago
RE: This form of resistance “hides behind justifying and, in many cases, accusatory words, takes refuge for self in traditions, in appearances, in formalities, in the known or in the wish to reduce everything to the personal without distinguishing between the act, the actor and the action.” Is that like asserting points of doctrine that have no basis in Scripture?
Anne Danielson
5 years 11 months ago
"...In the reform process, he said, “it’s normal, even healthy, to encounter difficulties,” and today these have appeared in “different typologies of resistance”: open, hidden and malevolent." It is important to note that Integral human development can only be realized through witnessing to The Word of God, thus what may appear to some to be resistance to the reform, cannot in essence be malevolent, when the desire is to affirm and not deny The Spirit of The Law. "There is nothing hidden that will not be revealed", including the ills of The Roman Curia, due to those who by denying that God, The Ordered Communion Of Perfect Love, The Most Holy And Undivided Blessed Trinity Is The Author of Love, of Life, and of Marriage, deny The Divinity of The Most Holy And Undivided Blessed Trinity, and thus deny Salvational Love, God's Gift of Grace and Mercy.
Anne Danielson
5 years 11 months ago
Blessed Christmas to all!