A free press is becoming near-impossible in Turkey 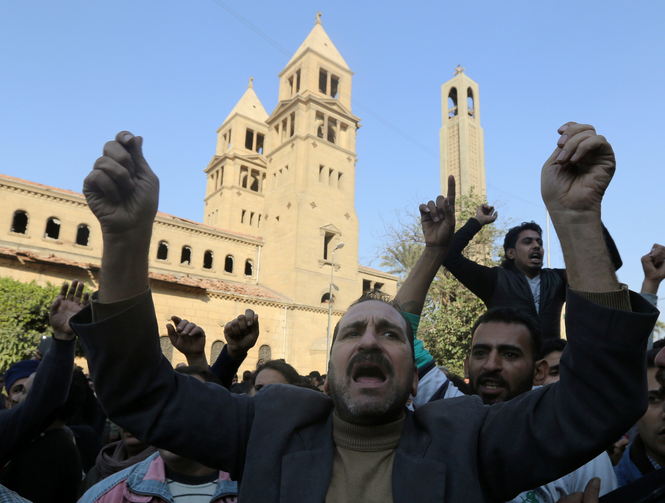 Christians chant anti-terrorism slogans outside the Coptic Orthodox cathedral complex Dec. 11 after an explosion inside the complex in Cairo. A bomb ripped through the complex, killing at least 25 people and wounding dozens, mostly women and children. (CNS photo/Mohamed Abd El Ghany, Reuters)

It is not a good time to be a journalist in Turkey. Since the failed coup attempt against President Recep Tayyip Erdogan last July, his government has been cracking down on its critics in the media. As of Dec. 1, 81 Turkish journalists were in prison facing anti-state charges, according to a new report from the Committee to Protect Journalists. Typical is the case of Mehmet Baransu, a former columnist for the daily newspaper Taraf, who was arrested and charged with “obtaining secret documents, insulting the president and having membership in a terrorist organization.” He is facing a sentence of 75 years.

Turkey is not alone in its offensive against a free press. The C.P.J. reports that at least 259 journalists around the world—the highest number in almost 30 years—are currently in jail for simply doing their jobs. It is hard to comprehend that in the 21st century, repression of this basic right continues. Countries that do not uphold freedom of the press, like China, Egypt, Eritrea, Ethiopia and Iran, deny their citizens the right to be informed about the world about them.

Thomas Jefferson wrote that to “preserve the freedom of the human mind...and freedom of the press, every spirit should be ready to devote itself to martyrdom.” Those are strong words, yet prescient ones. It takes courage and fortitude to be a journalist today in many corners of the world. In 2016, 47 journalists were killed on the job, and at least 17 of them were murdered. In the United States, we should honor their sacrifices by protecting a free press at home and remaining vigilant against any attempts to impede the ability of journalists to keep citizens informed.

1
Pope Francis celebrates grandparents on first World Day for elderly
Associated Press
2
‘Father Ted’ poked fun at Catholic Ireland, but only an audience steeped in faith would appreciate it
Addison Del Mastro
3
Tabloids, scandal and spying: The U.S. Catholic Church has hit a new, dangerous low point.
Zac Davis
4
The Latin Mass took off in this North Carolina diocese. What will happen under Pope Francis’ new restrictions?
Peter Feuerherd
5
Aquinas once asked: What if a dog consumed a consecrated host?
Terrance Klein