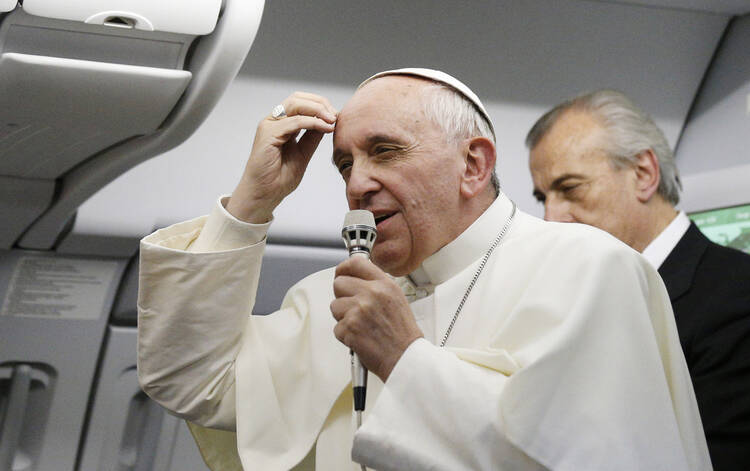 Pope Francis aboard the papal flight from Rio de Janeiro to Rome, July 28, 2013.

The Vatican on Wednesday declared that “persons with homosexual tendencies” cannot be admitted to Catholic seminaries. This reaffirms a 2005 policy now seemingly at odds with Pope Francis’ famous “Who am I to judge?” response when asked about gay priests in 2013.

The document, entitled “The Gift of the Priestly Vocation,” was drafted by the Vatican’s Congregation for Clergy, and it is meant to offer wide-ranging guidelines for priestly formation. In addition to several quotes from Pope Francis, the document draws heavily from the writings of St. Pope John Paul II and Pope Benedict XVI.

Pope Francis approved the document, according to a letter signed by Cardinal Beniamino Stella, who heads the clergy office.

It goes on to say that gay men “find themselves in a situation that gravely hinders them from relating correctly to men and women.”

“One must in no way overlook the negative consequences that can derive from the ordination of persons with deep-seated homosexual tendencies,” it says.

But men who experience a “transitory” attraction to other men could be admitted to seminaries, it says, again repeating the 2005 document, though “such tendencies must be clearly overcome at least three years before ordination to the diaconate.”

RELATED: The Church and the Homosexual Priest

The church allows individual bishops, seminary rectors and the superiors of religious orders to screen candidates for holy orders, and as a result the guidelines issued in 2005 have been implemented in widely different ways.

In some instances, those in charge of entrance to seminaries and religious orders as well as those in charge priestly formation have interpreted it to mean that gay men are prohibited from entering Catholic seminaries.

In others, men who have made homosexuality their primary identity, or have been outspoken in supporting what the Vatican calls the “so-called gay culture,” are barred.

But a third interpretation has been that men who identify as gay can enter so long as they do not act on their desires, and maintain their vows of chastity or promises of celibacy. (Though there are rare exceptions, such as married priests from other faith traditions who become Catholic, priests are required to practice celibacy.)

For example, Cardinal Timothy Dolan, archbishop of New York and former rector of the North American College in Rome, a residence for American seminarians, said in 2005 that he felt that gay men who satisfied all the Vatican’s requirements “shouldn’t feel discouraged” from becoming priests.

The new document says that gay men who seek to enter the seminary must be honest with their spiritual directors, “in a relationship of sincere dialogue and mutual trust,” and that church authorities should, in turn, “dissuade” gay candidates from pursuing ordination.

The language barring gays from the priesthood first came to light in 2005 under Pope Benedict XVI, but it was crafted soon after the clergy sexual abuse scandal broke in the early 2000s.

Some observers said at the time that church leaders were trying to pin the scandal on gay priests, even as psychology and law enforcement experts said there is no link between homosexuality and child abuse.

A letter released with the document in 2005 said that gay priests would be allowed to continue ministry but that they should not train current seminarians.

In 2008, the Vatican issued an update, saying that those overseeing the formation process of would-be priests must look at “areas of immaturity,” including “uncertain sexual identity” and “deep-seated homosexual tendencies,” when determining the suitability of candidates for the priesthood.

In the new document, the paragraphs about gay priests appear between a section about seminarians suffering from mental illness and seminarians who are considered threats to children.

There are no reliable statistics on the number of priests in the United States who are gay.

But James Bretzke, S.J., a professor of moral theology at Boston College, said in 2013 that it is “an empirical fact that lots of men are gay who are priests. And they are very good priests.”

"I would also observe that the numbers of gay men and women in the church ministry is probably larger than the general population, precisely because they are not seeking marriage,” he told U.S. News and World Report.

The new Vatican document, dated Dec. 8, the feast of the Immaculate Conception, was drafted in the spring of 2014, about a year after Pope Francis was elected. It then went through several rounds of editing after input from various Vatican offices and bishops from around the world.