Pope Francis closes the Year of Mercy, reminding us that Jesus' mercy is always open wide 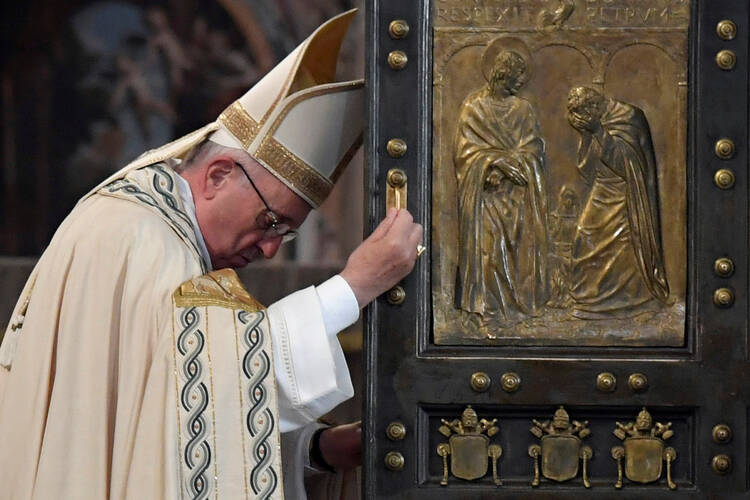 Pope Francis closes the Holy Door of St. Peter's Basilica to mark the closing of the jubilee Year of Mercy at the Vatican Nov. 20. (CNS photo/Tiziana Fabi, pool via Reuters)

Pope Francis closed the Extraordinary Jubilee Year of Mercy with the solemn, symbolic act of closing the Holy Door in St. Peter’s Basilica on Sunday morning, Nov. 20. Afterwards, in his homily at mass celebrated with the new cardinals in St. Peter’s Square, he told the world: “even if the Holy Door closes, the true door of mercy, which is the heart of Christ, always remains open wide for us.”

Under the gaze of the world’s media, Francis, wearing white vestments, stood before the Holy Door in silent prayer for a short time, head bowed. Then, at one minute before 10 A.M., he walked up and firmly closed it. He thus ended a truly historic period in the church’s history. For the first time ever, the Holy Year was celebrated not just in Rome but in dioceses across the world from Bangui, in the Central African Republic—where he opened the Jubilee on Nov. 30 last year—to his native Buenos Aires, from Washington D.C. to Beijing and Canberra.

More than 20 million pilgrims passed through the Holy Door in St. Peters, while countless millions of faithful, and even members of other religions, went through Holy Doors in churches across the world. 70,000 Romans and pilgrims from all continents were present in St. Peter’s square as Francis concelebrated mass, under a blue, though sometimes cloudy sky, with 16 of the new cardinals (the one from Lesotho was absent), most other members of the College of Cardinals and hundreds of bishops and priests. The Sistine Choir led the singing.

In his homily, Francis recalled that this was the feast of “Our Lord Jesus Christ, King of the Universe” which is “the crown of the liturgical year and of this Holy Year of Mercy.” He went on to reflect on the kind of kingship Jesus exercised: it was “without power or glory,” as “his throne is the cross.” “He does not have luxurious clothing, but is stripped of his tunic; he wears no shiny rings on his fingers, but his hands are pierced with nails; he has no treasure.”

He told his global audience following by television, radio, and social media, that “the grandeur” of Jesus’ kingdom “is not power as defined by this world, but the love of God, a love capable of encountering and healing all things.” Christ “lowered himself to us out of this love, he lived our human misery, he suffered the lowest point of our human condition: injustice, betrayal, abandonment; he experienced death, the tomb, hell.”

He recalled that Jesus “went to the ends of the universe to embrace and save every living being. He did not condemn us, nor did he conquer us, and he never disregarded our freedom, but he paved the way with a humble love that forgives all things, hopes all things, sustains all things” and “this love alone overcame and continues to overcome our worst enemies: sin, death, fear.”

Francis then warned the cardinals and believers alike against giving into the temptation “to keep our distance from Jesus’ kingship, to not accept completely the scandal of his humble love, which unsettles and disturbs us” but to “prefer to remain at the window, to stand apart, rather than draw near and be with him.” Instead of asking, “What does love ask of me, where is it urging me to go? What answer am I giving Jesus with my life?”

He warned against a second temptation too, the same one with which the devil tempted Jesus in the desert and on the cross. This is the temptation “to give up reigning as God wills, and instead to reign according to the ways of the world: to come down from the cross and destroy his enemies, to show his power and superiority!” Francis denounced this as “a direct attack on love: ‘save yourself’; not others, but yourself. Claim triumph for yourself with your power, with your glory, with your victory.”

When faced with this temptation, he said, “Jesus does not speak, he does not react. He does not defend himself, he does not try to convince them, he does not mount a defense of his kingship.” Instead, “He continues rather to love; he forgives, he lives this moment of trial in accordance with the Father’s will, certain that love will bear fruit.”

He told the cardinals and all the faithful that “we are called to struggle against this temptation, called to fix our gaze on the crucified one, to become ever more faithful to him” and not to give into the temptation to “seek out the comforts and certainties offered by the world” or to “the lure of power and success.”

Pope Francis said the Year of Mercy “invites us to rediscover the core, to return to what is essential” and “to look to the true face of our King, the one that shines out at Easter, and to rediscover the youthful, beautiful face of the church, the face that is radiant when it is welcoming, free, faithful, poor in means but rich in love, on mission.”

Recalling how the good thief turned to Jesus on the cross, asking for mercy, Francis reminded everyone that “as soon as we give God the chance, he remembers us.” Indeed, “God is ready to completely and forever cancel our sin because his memory—unlike our own—does not record evil that has been done or keep score of injustices experienced. God has no memory of sin, but only of us, of each of us, we who are his beloved children. And he believes that it is always possible to start anew, to raise ourselves up.”

Pope Francis concluded his homily by encouraging the new cardinals and all believers to “ask for the grace of never closing the doors of reconciliation and pardon, but rather of knowing how to go beyond evil and differences, opening every possible pathway of hope. God “believes in us, infinitely beyond any merits we have,” Francis stated, “and so too we are called to instill hope and provide opportunities to others. Because even if the Holy Door closes, the true door of mercy which is the heart of Christ always remains open wide for us.”

At the end of Mass, Pope Francis signed an Apostolic Letter on the theme of mercy that will be published tomorrow, which he entrusted to Cardinal Tagle of Manila and representatives of the church from all continents.