A new U.S. cardinal says Pope Francis has many more fans than foes 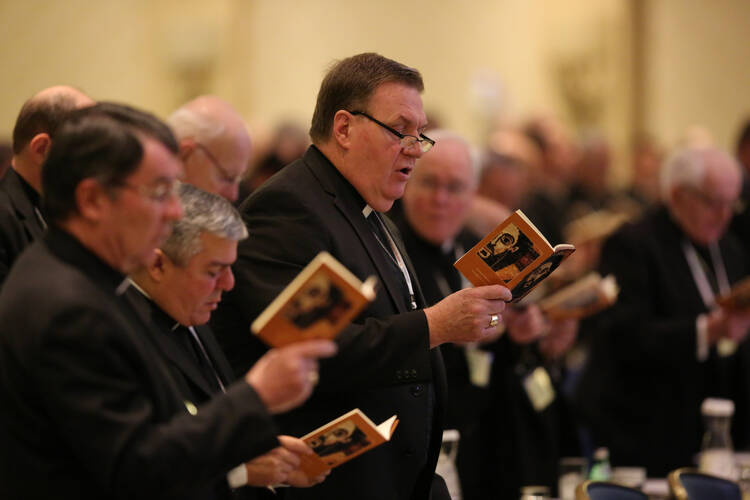 Cardinal-designate Joseph Tobin does not hold back when expressing his admiration for Pope Francis, who will create 17 new cardinals on Saturday, including Archbishop Tobin.

“There may be a school of so-called experts that find the pope hard to stomach, but there are exponentially more people to whom he speaks to their hearts,” he said in an interview with America on Nov. 18.

The cardinal-designate was responding to a question about critics of the pope who have questioned Francis’ theological acumen and ability to lead the church.

This week, four cardinals said that they plan a public rebuke of the pope over his pastoral letter “Amoris Laetitia,” which some bishops have used as justification for proposing a pathway for divorced and remarried Catholics to receive Communion, an interpretation the pope himself has appeared to endorse.

One of them, American Cardinal Raymond Burke, suggested the teaching was not magisterial, or that it did not carry the full weight of the teaching office of the pope.

But Archbishop Tobin said this kind of criticism isn’t new—and that the pope isn’t afraid of it.

“I think there’s been a backlash practically from day one” in some quarters, he said, noting that when he was in Rome in June 2013 to receive the pallium, the ceremonial stole linking an archbishop to Rome, just three months into pope’s tenure, Francis already had critics.

Even then, Archbishop Tobin said, “I read in the paper the so-called Vaticanologists that like to creatively write stuff about people who are criticizing the pope for not being a theologian, for speaking too spontaneously.”

He said the pope’s emphasis on mercy jars some critics, who do not like his off-the-cuff comments and efforts to reform the church. But he said the world thirsts for the pope’s words and actions.

“I think the pope recognizes how unmerciful the world has become and risks becoming even more,” Archbishop Tobin said. Plus, he said, “in the midst of the suffering, in the midst of cruelty, in the midst of whatever dilemmas human beings face, the church is not seen as a sacrament of mercy often.”

To that end, he praises Francis’ desire for the church “to deal with the great wounds, the great sufferings” over a church wrapped up in a battle over “some sort of doctrinal purity.”

In a way, Cardinal-designate Tobin said, the public disagreements are a sort of “tribute” to Pope Francis.

“It’s arguable that in previous pontificates there wouldn’t have been the freedom to express this sort of stuff,” he said.

But he also suggested that too much attention was being paid to the pope’s critics.

He noted that several cardinals and bishops—including Cardinal Christoph Schönborn of Vienna, whom he called “one of the great intellects in the College of Cardinals”—have called the pope’s teaching in “Amoris Laetitia” magisterial.

Pope Francis will create 17 new cardinals on Saturday, including two other Americans, Archbishop Blase Cupich of Chicago and Bishop Kevin Farrell, formerly the bishop of Dallas and now the head of a Vatican office dealing with family issues.

When Cardinal-designate Tobin arrived in Rome on Wednesday morning, it was with “a certain joy, like coming home,” he said during the nearly 40-minute interview.

He had lived previously in Rome for nearly 20 years, in different leadership posts for his religious order, the Redemptorists. When his term as superior general was up in 2009, he planned to take a sabbatical before returning to the United States.

But he received a call from the Vatican telling him that Pope Benedict XVI wanted him back to work in the Vatican’s office that oversees religious life. So he cut his sabbatical short and returned to Rome, the first of many unpredictable changes in his life in recent years.

After just a couple of years, he was pushed out of the job by some who were upset that he was not cracking down hard enough on American sisters accused of not toeing the church line on doctrinal issues.

He was then given the job of archbishop of Indianapolis in 2012 and the Detroit native moved back to the Midwest.

Last month, the pope announced that Archbishop Tobin would be made a cardinal. Then, less than four weeks later, the Vatican said he would be moved from Indianapolis to Newark, another change he did not expect and one that he had some difficulty accepting.

“In some ways it’s been more difficult for me than them,” he said of Catholics in Indianapolis who told him that they were saddened to learn the news.

“People have said this really hurts, but you must be needed elsewhere, which in a certain sense, makes me feel like they’re sending me as a missionary from Indianapolis to Newark, which I think is tremendously generous of them,” he said.

Cardinal-designate Tobin flew to Rome from Baltimore, where U.S. bishops had just wrapped up their fall meeting. He was one of just a few bishops to take to the floor to offer input on the strategic plan the bishops adopted, asking why there was not more emphasis on the pope’s teachings on the environment.

He said on Friday that he asked the question, in part, because “I don’t think I’ve given ‘Laudato Si’’ the sort of attention that it needs.”

“I suspect,” he added, “I’m not the only bishop” who feels that way.

He said “the church can be prophetic in showing the linkage” between environmental degradation and the increased suffering of the poor, which, he said, the pope did in his encyclical on the environment.

He said he fears it “risks being lost” and that bishops must speak up for the environment now because of “the incoming presidential administration, which, at least at times, seems not to be terribly concerned with the environment, and eager to overturn any environmental legislation of the last few years.”

When asked about harassment toward Muslims, Jews and immigrants in the United States following the presidential election, Cardinal-designate Tobin said some Americans are trying to forge new borders “about what makes ‘us’ us” in light of changes and uncertainty brought about by globalization.

“When boundaries exclude, scapegoat or marginalize, then we have to look at it and just say, does the Gospel support this?” he said. “Because Jesus, in his own ministry, went beyond the boundaries to show the love of God.”

Michael O’Loughlinis the national correspondent for America and author of “The Tweetable Pope: A Spiritual Revolution in 140 Characters.” Follow him on Twitter at @mikeoloughlin.

@MikeOLoughlin
Show Comments (
4
)
Comments are automatically closed two weeks after an article's initial publication. See our comments policy for more.
William Rydberg
5 years 2 months ago
Finally! We are starting to hear about the Dubia which apparently the Holy Father declined to reply. Without getting in to the "they said and he said...". It's not like it's the first time in Church history that concerns have arisen (if the readers are honest he will remember Alexander VI, one of the Borgia Popes and some others in Church history) concerning "loosie goodie" teachings by a Pope. I remember recently, discussions about concerns raised by past Popes about China, which some scholars suggest may have delayed proselytizing. There are others. Concerning Scripture, there is the Correctionof Pope Peter documented in the Gospels around treatment of the Gentiles. Galatians 2:11-21 Bottom line, a Pope can get bum advice at times. Never a pretty sight though. Pray for all concerned. Pray for the Vicar of Christ, in Christ, The King...
Luis Gutierrez
5 years 2 months ago
Shift away from culture wars? What about the culture war in the Church about ecclesiastical patriarchy? Christ is the Alpha and the Omega, not a patriarch. The Church is a communion, not a patriarchate. For your consideration and prayers: Appeal to Pope Francis ~ English http://pelicanweb.org/CCC.TOB.120.html#english http://pelicanweb.org/CCC.TOB.120.html#addenda
Chuck Kotlarz
5 years 1 month ago
Off topic, but perhaps we occasionally owe ourselves a lighter comment. Pope Francis last year became an honorary member of the Harlem Globetrotters. https://www.washingtonpost.com/news/morning-mix/wp/2015/05/07/meet-the-newest-harlem-globetrotter-pope-francis/?utm_term=.1faedaa71961
James Haraldson
5 years 1 month ago
No one criticizes Pope Francis for not being a theologian. He is criticized for his prideful trivializations of Catholic truth and obliviousness to the murderous consequences to such trivializations. Anyone who would characterize a concern for the greatest evil in human history, abortion, as and "obsession" is unfit to speak publicly about morality.