Today, Pope Francis celebrated Mass with 1,000 prisoners at the Vatican 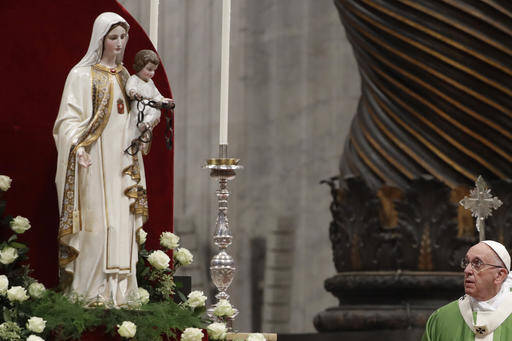 Pope Francis stares at a statue of the Holy Mary as he celebrates Mass for the Jubilee of inmates, at St. Peter's Basilica at the Vatican, Sunday, Nov. 6, 2016. (AP Photo/Gregorio Borgia)

Today, for the first time in St. Peter’s Basilica, Pope Francis celebrated a Mass for the Jubilee of Prisoners—or, as he put it, for “our brothers and sisters in prison.” The celebration on Nov. 6 was attended by some 1,000 prisoners and ex-detainees from 12 countries, ranging from the Argentina, Mexico and the United States to South Africa, Spain and Italy, who were accompanied by their families, prison guards and staff, volunteers who help prisoners, magistrates and prison chaplains.

Following the Mass, he prayed with tens of thousands of people from all continents, sheltered under umbrellas from the rain in St. Peter’s Square. Pope Francis, who has visited prisons in several countries, including the United States, and has spoken with detainees, prison staff and chaplains, then made a threefold appeal to states worldwide.

He called first for “an improvement in the conditions of life in prison so that the human dignity of the detainees is fully respected.”

Next, he called for the revision of the penal justice system in the different countries. “I wish to reaffirm the importance of reflecting on the need for a penal justice that is not exclusively punitive but is open to hope and to the prospect of reinserting the convict in society,” the pope said.

Lastly, Pope Francis pleaded with “the competent civil authorities” in states across the world to make a special act of clemency in this Holy Year of Mercy, asking them “to consider the possibility” of giving clemency “to those detainees whom they consider suitable of benefitting from such a provision.”

Francis has always had a special place in his heart for prisoners and insisted on holding a Jubilee for Prisoners in the Vatican during this Holy Year of Mercy. As a bishop in Argentina and now as pope, he has reached out to prisoners, met many of them and their families, has phoned some in prison and visited prisons in Latin America, the United States and Italy.

During the Mass, Francis centered his homily on hope, seeking to kindle hope in those present but also in prisoners worldwide.

“God hopes! His mercy gives him no rest. He is like that Father in the parable, who keeps hoping for the return of his son who has fallen by the wayside,” Francis declared. “God does not rest until he finds the sheep that was lost [Lk 15:5]. So, if God hopes then no one should lose hope,” the pope added in a homily that moved many in the audience to tears.

At one point in his homily, Francis departed from his written text and looking at the prisoners in the pews before him, he confided, “I tell you that every time I enter a prison I ask myself, ‘Why them, not me?’ because each of us has this possibility to do wrong!”

He noted that sometimes in today’s world “a certain hypocrisy leads to people considering you only as wrongdoers, for whom prison is the sole answer.” In fact, he said, “we don’t think about the possibility that people can change their lives; we put little trust in rehabilitation.” But in this way, “we forget that we are all sinners and often, without being aware of it. We, too, are prisoners.”

At times, he said, “we are locked up within our own prejudices or enslaved to the idols of a false sense of well-being. At times, we get stuck in our own ideologies or absolutize the laws of the market even as they crush other people. At such times, we imprison ourselves behind the walls of individualism and self-sufficiency, deprived of the truth that sets us free. Pointing the finger against someone who has made mistakes cannot become an alibi for concealing our own contradictions.”

Quoting St. Paul, he reminded his global audience that “in God’s eyes no one can consider himself just,” but, at the same time, “no one can live without the certainty of finding forgiveness!” He prayed that none of the prisoners in the basilica or worldwide allow themselves “to be held captive by the past!”

He acknowledged that “even if we wanted to, we can never rewrite the past” but sought to encourage them by reminding them that “the history that starts today and looks to the future, has yet to be written, by the grace of God and your personal responsibility. By learning from past mistakes, you can open a new chapter of your lives.”

He pleaded with them, “never yield to the temptation of thinking that we cannot be forgiven. Whatever our hearts may accuse us of, small or great, ‘God is greater than our hearts.’ We need but entrust ourselves to his mercy.”

He urged them never to give up hope, “For hope is the strength to keep moving forward. It is the power to press on towards the future and a changed life. It is the incentive to look to tomorrow, so that the love we have known, for all our failings, can show us a new path. In a word, hope is the proof, lying deep in our hearts, of the power of God’s mercy. That mercy invites us to keep looking ahead and to overcome our attachment to evil and sin through faith and abandonment in him.”

Before the celebration started, those in the basilica had heard personal testimonies from some convicts who had committed crimes but later repented and changed their lives, and from a mother who overcame the hate in her heart against the man who killed her son and became reconciled with him.

Alluding to such transformations, Francis reminded his global audience—both the prisoners and their victims—that, as Jesus said, “faith, even when it is as tiny as a grain of mustard seed, can move mountains.” For sure, he said, there are “some wounds that only God’s power, his mercy, can heal.” But he assured them that “when violence is met with forgiveness, even the hearts of those who have done wrong can be conquered by the love that triumphs over every form of evil…. [I]n this way, among the victims and among those who wronged them, God raises up true witnesses and workers of mercy.”

For this celebration, a wooden statue of Our Lady with the child Jesus in her arms holding a broken chain had been placed on the left-hand side of the altar from where the pope spoke. He concluded his homily by referring to this statue and said the broken chain symbolizes “the chain of slavery and imprisonment” and prayed that the mother of Jesus may intercede for all prisoners so that their hearts “can experience the power of hope for a new life, one worthy of being lived in complete freedom and in service of the neighbor.”