Women are living in a new historical era. How will the church respond? 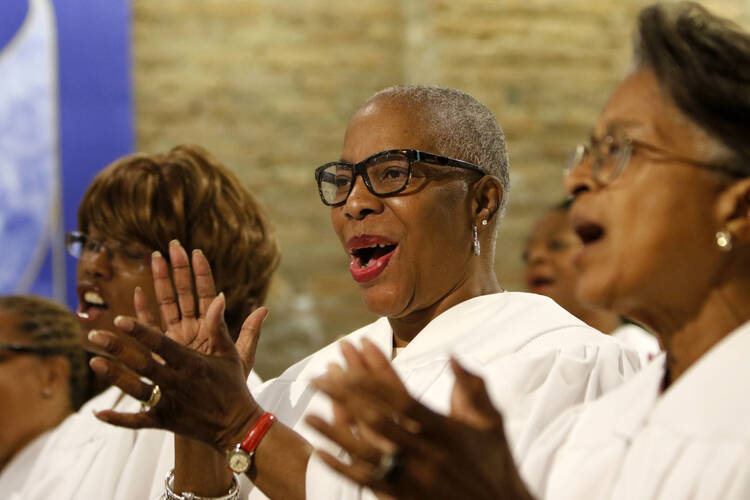 Sandra Moore-Hunt sings with the choir during a Mass marking the close of the centennial year of the Franciscan Handmaids of the Most Pure Heart of Mary Oct. 8 at St. Charles Borromeo Church in the Harlem section of New York City. (CNS photo/Gregory A. Shemitz)

I was addressing a diocesan women’s conference when the mother of a teenage girl asked me a difficult question. If I do not have a better answer next time—and if the church universal does not have more answers to offer soon—I wonder how we will engage girls of the 21st century.

Her daughter wanted to know how to relate to a church where a father God sends a son whose good news is proclaimed most visibly by a male hierarchy.

I am not a theologian. Bummer. But I did the best I could with the classic responses. I spoke of taking Jesus’ incarnation seriously while remembering the Marian face of the church. I referred to the problem of mistaking ordination for a power trip. I affirmed equality alongside a diversity of sexes and roles. I argued for God’s image as two-sexed and Jesus’ good news as transcending the listener’s sex. I spoke of the many vowed and laywomen who already lead Catholic efforts, and of the near invisibility of women’s heroic family and service work.

But I still felt inadequate.

We proclaim Christ as the model human, that Christology is anthropology. Of course, women and men look to Mary as the human who conformed herself most closely to Christ. She was as brave and strong as any person imaginable. Still, no one should be surprised that many 21st-century Catholic women do not clearly grasp her. There is no “vicar of Mary.” Mary is known most as “mother,” while contemporary women are single longer and more often single mothers. We are also employees and not infrequently breadwinners for our families.

Women are more used to operating independently in some spheres and to collaborating with men in others. We participate in the governance of institutions that affect us. At work, we find female role models of efficacy in formerly all-male environs. We struggle to put family first while also doing justice at work.

In the personal realm, most women desire both children and commitment from their father but have revealed a willingness to enjoy the former without the latter, if that is the best we can get. We are regularly told that sexual availability unlinked from children and marriage is the starting block of a relationship. Look “hot,” and everything else will follow.

It can be argued for all the “classic” reasons listed above that young Catholic women can manage without more visible female role models within the church, more collaboration with clergy and more guidance pertinent to women. And it is true that the church should not operate like IBM. I am saying only that if the church wants women to know real freedom—the freedom of the daughters of Christ—then it needs to make the case more visibly, and more intentionally directed to women’s new historical situation.

This is hard, and I can offer only initial suggestions. Perhaps more female saints who have juggled the demands of the contemporary female life! Certainly also more insights from qualified women wherever doctrine and pastoral practices are deliberated: synods, bishops’ conferences, diocesan and parish groups. If the church takes God’s two-sexed image seriously—and it does—then it is clear that women’s comparative advantages must be joined to men’s in order to understand God and the Christian life. This is not to fall into the clericalism trap. Rather, substantial collaboration should help men to better experience their work as service and women to value their contributions precisely as women. Surely, too, this would better reveal the Marian church Pope Francis celebrates.

There are inevitable moral hazards when any one group leads an enterprise. There are inevitable lacunae when any affected group is excluded from significant collaboration. Women are living in a new historical era. If the church is to be for younger women what it is meant to be for all—the living Christ present at every point in history—I suggest we provide some new forms of witness, dialogue and representation for women.

​Helen Alvaré is a professor of law at George Mason University, where she teaches law and religion and family law.