Pope Francis: Don't become a hypocrite of your faith 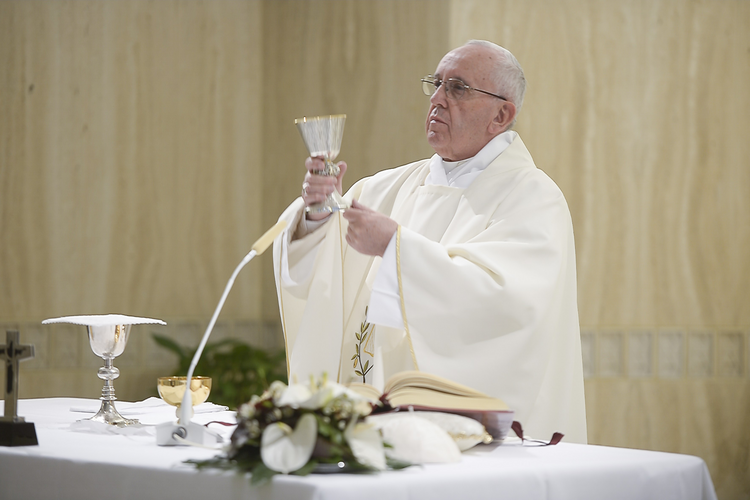 Pope Francis raises the Eucharist as he celebrates morning Mass in the chapel of the Domus Sanctae Marthae at the Vatican on April 11. (CNS photo/L'Osservatore Romano, handout)

On Monday Pope Francis warned against excessive rigidity. Speaking during the homily at morning Mass in the Casa Santa Marta, the pope said that God gives us the freedom and the gentleness to be merciful.

Drawing inspiration from the Gospel reading of the day which tells of when Jesus, who was teaching in the synagogue, healed a crippled woman and ignited the anger of the righteous, Pope Francis said, “It is not easy to keep to the path indicated by God’s law.”

The reading of Matthew tells us that Jesus’ action provoked the fury of the leader of the synagogue who was “indignant that he had cured the woman on the Sabbath” because, he said, Jesus had violated God’s law by doing so on the Sabbath day which is set aside for rest and worship.

Pointing out that the Jesus responded calling the leaders of the synagogue “hypocrites,” the pope observed that this is an accusation Jesus often makes to those who follow the Law with rigidity. “The law, he explained, was not drawn up to enslave us but to set us free, to make us God’s children.”

Concealed by rigidity, Pope Francis said, there is always something else. That is why Jesus uses the word ‘hypocrites,’ he said.

“Behind an attitude of rigidity there is always something else in the life of a person. Rigidity is not a gift of God. Meekness is, goodness is, benevolence is, forgiveness is. But rigidity isn’t.”

In many cases, the pope continued, rigidity conceals the leading of a double life; but, he pointed out, there can also be something pathological.

Commenting on the difficulties and suffering that afflict a person who is both rigid and sincere, the pope said this is because they lack the freedom of God's children. “They do not know how to walk in the path indicated by God’s law.”

“They appear good because they follow the law; but they are concealing something else: Either they are hypocritical or they are sick, and they suffer,” he said.

Pope Francis also recalled the parable of the prodigal son in which the eldest son, who had always behaved well, was indignant with his father because he had joyfully welcomed back the youngest son who returns home repentant after having led a life of debauchery. This attitude, the pope explained, shows what is behind a certain type of goodness, which is “the pride of believing in one’s righteousness.”

The elder son was rigid and conducted his life following the law but saw his father only as a master. The other put rules aside, returned to his father in a time of darkness, and asked for forgiveness, he said. “It is not easy to walk within the Law of the Lord without falling into rigidity.”

The pope concluded his homily with a prayer. “Let’s pray for our brothers and sisters who think that by becoming rigid they are following the path of the Lord.  May the Lord make them feel that He is our Father and that He loves mercy, tenderness, goodness, meekness, humility. And may he teach us all to walk in the path of the Lord with these attitudes.”

He never tires of demonstrating his inability to make intelligent distinctions. Jesus condemned those who equated cultural practices, which are never binding, with moral law, which is binding. It is impossible to be rigid about moral truth. A failure to be consistent and rational about moral truth results in human tragedy, something the pope of "mercy" fails to appreciate.