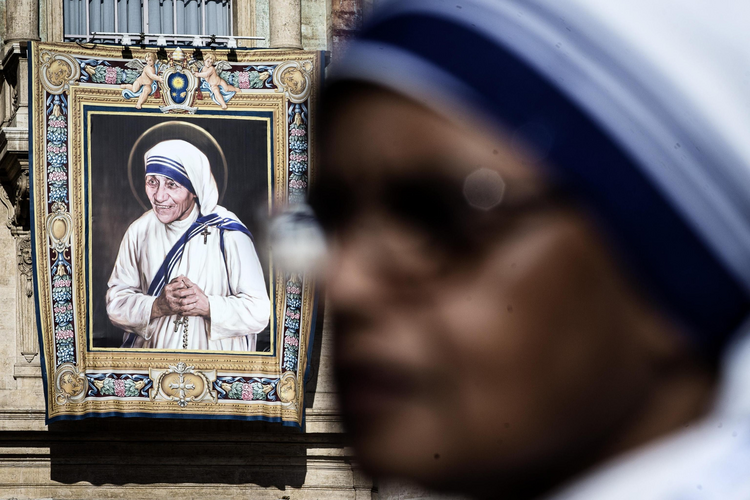 A mighty cheer went up from the 100,000 pilgrims and Romans in St Peter’s Square this Sunday morning when Pope Francis declared Mother Teresa of Calcutta a saint of the universal church, and a model of Christian life for believers in the 21st century.

Afterwards, in an inspiring homily praising the life and work of this great woman, Francis drew warm applause when he remarked, “I think, perhaps, we may have some difficulty in calling her ‘Saint Teresa’; her holiness is so near to us, so tender and so fruitful that we continue to spontaneously call her ‘Mother Teresa’!”

This morning too, Francis gave powerful expression to hers and his commitment to the poor and the outcasts by inviting 1,500 poor and discarded people—cared for by her order across Italy—to attend the canonization. He not only gave them privileged places at the ceremony but also, afterwards, invited them to a lunch of Neapolitan pizzas in the atrium of the Paul VI audience hall.

The canonization took place at the beginning of mass, on a very hot day. It began when Cardinal Angelo Amato, prefect of the Congregation for the Causes of the Saints, read a brief biography of the life of  Mother Teresa, originally known as Agnes Gonxha Bojaxhiu, who was born in 1910 to Albanian parents in Skopje (now part of Macedonia), and then asked the pope to declare her a saint. After that, the Sistine choir led the people in singing the Litany of the Saints and then, at 10:41 a.m., Francis, reading the words of canonization in Latin, declared her a saint. This drew a mighty cheer from the vast crowd in the square, people applauded, embraced and rejoiced, and some enthusiastically waved the flags of India and Albania. Later in his homily, Pope Francis praised this great woman with whom he has so much in common.

“Mother Teresa, in all aspects of her life, was a generous dispenser of divine mercy, making herself available for everyone through her welcome and defense of human life, those unborn and those abandoned and discarded,” he stated.

He recalled that “she was committed to defending life, ceaselessly proclaiming that ‘the unborn are the weakest, the smallest, the most vulnerable.’ She bowed down before those who were spent, left to die on the side of the road, seeing in them their God-given dignity; she made her voice heard before the powers of this world, so that they might recognize their guilt for the crime of poverty they created.”

For Mother Teresa, Francis said, “mercy was the ‘salt’ which gave flavor to her work, it was the ‘light’ which shone in the darkness of the many who no longer had tears to shed for their poverty and suffering.” He added, “her mission to the urban and existential peripheries remains for us today an eloquent witness to God’s closeness to the poorest of the poor.”

Last December, Francis took the strategic decision to hold the canonization of Mother Teresa on this very day when volunteers and workers of mercy from all over the world came to Rome for their participation in the Jubilee Year of Mercy. He sees her as an icon of mercy for the modern world, and a model for everyone engaged in volunteer work and acts of mercy, as he explained in his homily.

“Today,” he told them, “I pass on this emblematic figure of womanhood and of consecrated life to the whole world of volunteers: may she be your model of holiness!”

Moreover, he said, “may this tireless worker of mercy help us to increasingly understand that our only criterion for action is gratuitous love, free from every ideology and all obligations, offered freely to everyone without distinction of language, culture, race or religion.”

Francis recalled that in reference to these different peoples Mother Teresa loved to say, “Perhaps I don’t speak their language, but I can smile.” So, Francis told them, “Let us carry her smile in our hearts and give it to those whom we meet along our journey, especially those who suffer.” By doing so, he said, “we will open up opportunities of joy and hope for our many brothers and sisters who are discouraged and who stand in need of understanding and tenderness.”

Earlier, in his homily, Pope Francis highlighted the importance of mercy, of which Mother Teresa is a shining example. He explained that “God is pleased by every act of mercy, because in the brother or sister that we assist, we recognize the face of God which no one can see.” He stated that “each time we bend down to the needs of our brothers and sisters, we give Jesus something to eat and drink; we clothe, we help, and we visit the Son of God.” He stated categorically that in life “there is no alternative to charity” and emphasized that “those who put themselves at the service of others, even when they don’t know it, are those who love God.”

When he finished speaking, the crowd broke into thunderous applause. Then, after prayers in different languages, Francis went on to concelebrate mass with the more than 70 cardinals, 400 archbishops and bishops and 1,700 priests present at the ceremony.

There were also numerous women and men religious in the square, including many Missionaries of Charity, the order founded by the new saint and, following the liturgical tradition, a few of them placed a blood relic of Mother Teresa near the altar immediately after the canonization.

Also attending the ceremony was the Brazilian man who was cured through the second miracle, Marcilio Haddad Andrino, together with his wife.

No less than 15 countries sent official delegations to the ceremony to honor “the saint of the slums.” Among them were the foreign minister of India, the presidents of Albania, Macedonia, Kosovo and Italy and the queen of Spain.

President Barack Obama also sent a delegation from the United States led by Lisa Monaco, the assistant to the president for homeland security and counterterrorism. The U.S. delegation included U.S. ambassador to the Holy See, Kenneth Hackett, Suzy George, deputy assistant to the president, Sr. Donna Markham, president and CEO of Catholic Charities and Carolyn Woo, president and CEO of Catholic Relief Services.

The presence of these delegations was hardly surprising given that even during her lifetime, Christians and followers of other religions—Hindus, Sikhs, Jews, Muslims and Buddhists, and many people who do not profess a religion—considered this extraordinary woman a saint. When she died on Sept. 5 1997, India recognized her greatness by giving her a state funeral.

Today, 19 years after her death, the Catholic church has officially recognized her as a saint. She is the first Nobel Peace Prize winner to be so honored.

@gerryorome
Show Comments (
10
)
Comments are automatically closed two weeks after an article's initial publication. See our comments policy for more.
William Rydberg
4 years 9 months ago
Such great news. Makes one think of the great American Jesuit Fr John A. Hardon SJ who came to know personally and closely support St Teresa's efforts. Here is a link from the Fr. John A. Hardon SJ Archives to a tribute he wrote at the time of her death, it's well worth reading http://www.therealpresence.org/archives/Saints/Saints_029.htm Maybe one day we will have the opportunity to also rejoice in canonization of Fr John A Hardon SJ , who in my opinion, was the greatest American Jesuit of the 20th Century. Though, he was not without many challenges in his lifetime. Truly a "white Martyr". Don't know how he managed it, but with his great breadth of knowledge. Great learning, he died a man of seeming (to us worldly men) naivite and innocence. Taking people at their word. Fr John, friend of God, pray for us! in Christ, Father of all Jesuits
Tom Fields
4 years 9 months ago
In these very difficult times we can find great joy in the lives of St. John Paul II and St Mother Teresa. If only the world would stop and listen and pray and emulate,
Crystal Watson
4 years 9 months ago
I too don't understand why anyone would choose to pray to a saint for intersession instead of praying directly to Jesus/God. When the disciples asked Jesus how they should pray, he didn't advise them to pray to anyone but God.
William Rydberg
4 years 9 months ago
Lots of answers to this one Crystal. But the one that comes to mind today ... When a saint is in heaven with God all communication is accomplished through the Divine Internet. God is a personal God and like you has preferences and priorities. God is the GOD of Israel... ...Just one of many answers based on the Revelation... in Christ
Crystal Watson
4 years 9 months ago
You're saying that God is more likely to answer the request of a saint than he would be a request from you or me because he likes them more? First, we don't know God especially likes saints just because the Catholic church has chosen them. Second, this idea turns God into something like Zeus, with the human foible of favoritism. Pretty depressing theology.
William Rydberg
4 years 9 months ago
It is quite incorrect to interpret the canonization process as saint making. The process means that the persons name is entered on the official public canon (or lists). In fact, the gospel describes followers of the gospel as saints. Its highly likely that many of our relatives are now saints in heaven, some may even be "higher up" in heaven than St Teresa. Thats up to God. one should not be legalistic and think that God owes us anything. Ultimately, God behaves like He wants. God is perfect justice... ...in Christ
Crystal Watson
4 years 9 months ago
Maybe God is as you describe. I don't know. I hope not. I hope he's like Jesus, who at least most of the time seemed like someone I could respect and trust.
William Rydberg
4 years 9 months ago
Jesus is Lord...
Joe Kash
4 years 9 months ago
Crystal, Have you ever asked someone to pray for you or for your intention? Have you asked a friend to pray for you? Have you ever told someone else that you would pray for them? Why? Why not just pray for yourself and your own intention? Why pray for someone else when they can pray on their own behalf? Its the same with the saints. You ask them to pray for you or your intentions. He is the God of the living. And those living in heaven can be our powerful advocate. Peace.
Crystal Watson
4 years 9 months ago
Yes, I do all that stuff, all the while feeling that it doesn't really make sense. It's confusing.