I don't think of myself of a Saint. Here's why Mother Teresa still inspires me to be one 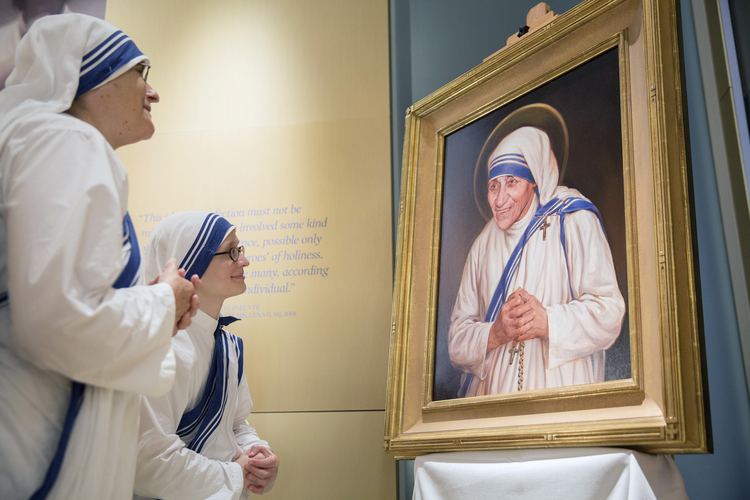 But what is a saint? Maybe saints don’t always feel close to God. Perhaps they struggle too with seeing the point of it all. Perhaps they are more like you and me than we realize.

That’s why I think it’s important to hold up Mother Teresa and her dark night. This holy woman gained international renown even among secular audiences for her labors for the poor of India, and yet for many years she could not feel God near her. As James Martin, S.J., says, “She’s doing it on an empty tank.”

An “empty tank” is a tragically common experience in our time. The world of 2016 is a fractured place, with every political, social, economic and spiritual indicator suggesting that many of us are angry, disconnected and frustrated. The current U.S. presidential campaign is a prime example. For while the campaign has hit new levels of rancor and division, most Americans feel excluded from the process. Most of us are unhappy with the choices and alienated from the conversation. It’s no wonder people are attracted to the notion that the system is rigged.

You find much of the same with the economy. Current levels of inequality have greatly reduced the middle class and compounded pockets of poverty that were only worsened by the recession in 2008. Many people feel useless because they can no longer provide for their families, and helpless because they see no end to their troubles. It is no surprise that incredible numbers of people in this country believe we are headed in the wrong direction.

These feelings of disconnection and confusion are daily struggles for many of us. In Bowling Alone, Robert Putnam explains that Americans do not participate in voluntary social and civic organizations as much as they used to, and as a result social interactions have declined.

Organized religion has fared no better. While the rise of the “nones” is complicated, it is clear that many people no longer feel any connection to religious bodies, long a source of community in the United States. It is no surprise then that Americans, despite all our new access to connections and technology, are lonelier than ever. We live in a time when many people doubt institutions, fear their neighbor and worry that there are no meaningful principles undergirding our way of life. We feel vulnerable. There aren’t enough shows on Netflix to distract us from that haunting feeling. When we are honest, most of us can easily identify with being lonely, confused and lost.

Mother Teresa was right there with us. For much of her life, and especially at the height of her activity as a religious, she struggled with feeling lonely and unloved, unable to see or be seen, to speak or to be heard. In one of her letters, she writes: “You don’t know how miserable and nothing I am.” She felt no “faith,” “love” or “trust”: only “so much pain—the pain of longing, the pain of not being wanted.”

Mother Teresa’s ministry was one of profound awareness of her spiritual brokenness: she wanted to bring people closer to God, and yet felt like a hypocrite because of her own distance from him. The grace in that suffering is that she didn’t lapse into pride or arrogance. Indeed, she was always going beyond herself, recognizing that “Calcutta is everywhere.”

Even when Mother Teresa felt profoundly barren inside, she focused on the great external fruits of her labor. She was willing to look squarely at the world as it is, in all of its chaos and despair. She was able to hold that gaze and help others, because she could also be joyful in the midst of this suffering. But holding that gaze isn’t all sunshine, roses and happiness.

Mother Teresa is a saint for our times. She knew as much desolation, disconnection and aridity as anyone. And so do we. But we cannot ignore the darkness and suffering of others to protect our own desires to feel comforted and consoled. Real engagement will mean marching into the darkness. Faith is as challenging as it is consoling.

To be fruitful and hopeful in a world that will often leave us desolate and despairing, we must be willing to face the darkness and pain of our time, rather than losing ourselves in distractions and the soothing anesthesia of ideology, consumerism, escapism and other opiates of our age. We must be willing to “enter into the chaos of others,” as James Keenan, S.J., says, even as we negotiate our own chaos. And while we may feel lonely and vulnerable at first, we may also find that we do not have to be lonely by ourselves. For this loneliness crosses all kinds of divisions today, connecting us to each other in ways we never imagined.

James Martin, S.J., notes that at times Mother Teresa seemed to ignore the “exterior signs of God’s presence” that many around her recognized. We don’t need to eliminate chaos and darkness to find God. We can enter into the suffering and confront our fears that we are useless, that we are far from God and other people, that we are unloved. Like Mother Teresa, we may be broken, but let us not be afraid.

Bill McCormick, S.J.
@BMcCSJ
Show Comments (
1
)
Comments are automatically closed two weeks after an article's initial publication. See our comments policy for more.
ed gleason
4 years 10 months ago
Here is how our retired pastor fulfilled St Teresa's message in one of the richest cities in the world. and subsequent pastors and laity are keeping up the message too. thegubbioproject.org/video