We can't all be Mother Teresa. 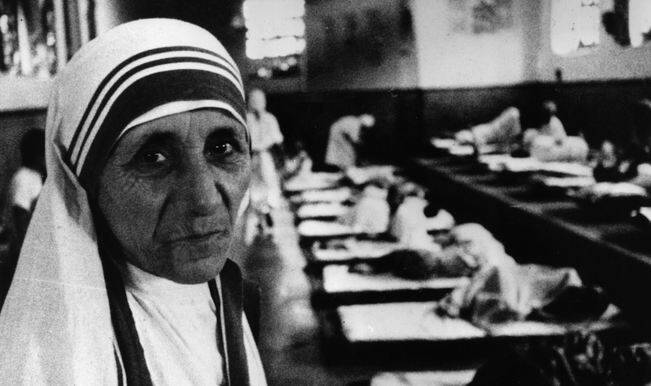 Cambridge, MA. I have been graced to meet a number of saints in my life—God’s holy people, living lives of faith and hope and love, going beyond the bounds where most of us stop. And these have been fellow Catholics and Christians, and people in other faith traditions as well; if we have eyes to see, we are meeting them every day.

But I have never met and spoken with a canonized saint, though I have been in the presence of two. St. John Paul II visited Chicago in 1979 when I was a doctoral student there, and I was in the assembly of priests and religious that he addressed one evening. And in December 1973, I worked for a few days at the Home for the Dying in Calcutta (now Kolkata). One morning I was mopping the floor when Mother Teresa came into the home with some foreign visitors, possibly benefactors. I was about 20 feet away from her, mop in hand; I probably could easily have gone up to her to say hello, but I couldn’t at the moment think of anything to say. (“Mother Teresa, thanks you! Keep up the good work! You inspire us!” Such words, sincere enough, seem to fall short. So I just watched, from a distance.) In any case, I was in the room with Mother Teresa—who, as you all know, will canonized in Rome this Sunday.

I never really met her, then, and I think have never written about her, but Mother Teresa has played a role in my life. As most readers will know, I have been studying Hinduism for over 40 years. In 1973, I was already living in Kathmandu and teaching at St. Xavier’s; the trip to Calcutta was part of that stay, a memorable drive down through the foothills of the Himalayas and across the plains of north India to the city, where I spent a few days, including my days volunteering at the Home for the Dying. When people ask me how I became interested in Hinduism and why I went to India after college in 1973, I tend to say it was something unexpected, a kind of miracle, for a young man from New York who until 1972 or so had shown no interest whatsoever in Asia, India or Hinduism. Some Hindu friends (half) jokingly say that I was destined to visit India, by the good karma of a previous life there; or that I am indeed Francis Xavier—one of the first Jesuits, and the first to visit India—returned once more.

But the reason I end up with is usually, “I was inspired by Mahatma Gandhi and Mother Teresa, and in stepping out into the wider world, I wanted to go where they did their wonderful, amazing works of mercy and love and peace, so as to be like them.” Regarding Mother Teresa (more on Gandhi, another day), I was particularly enchanted by the fact that she not only went to India as a member of the Sisters of Loreto, to dedicate herself to work in the schools but, most famously, discovered that such a vocation, as challenging and worthwhile as it was, was not enough, was not what God wanted of her. So as we all know, after some 20 years, she left the convent, and went out into the streets, to serve the poorest of the poor. She invented a new way of religious life, by the instincts of faith. She was on her own. She had simply experienced, one day riding a train, her “call within a call”: “I was to leave the convent and help the poor while living among them. It was an order. To fail would have been to break the faith.”

Like other idealistic young persons, I wondered, in 1973 and at other times, too, if the life I chose—being a Jesuit (I had entered the order in 1968, five years before going to Kathmandu)—was enough: Wasn’t it too comfortable, too predictable, too safe? It was riveting to think of Mother Teresa, after decades of service, leaving behind a respected ministry, to risk everything in faith. Like that merchant in the Gospel—“The kingdom of heaven is like a merchant in search of fine pearls; on finding one pearl of great value, he went and sold all that he had and bought it” (Mt 13:45-46)—I thought that the least I could do for "regency," the interim part of my Jesuit training between philosophy study and theology study, was to go far away, to a new place, among the poor, to see what God had in mind for me. To be, in a little way, like Mother Teresa.

I think of this today not only because of Sunday’s canonization, but because of the radical words of Sunday’s Gospel. Jesus surprises the large crowd following him with words that must have stunned many of them:

Now large crowds were travelling with him; and he turned and said to them, “Whoever comes to me and does not hate father and mother, wife and children, brothers and sisters, yes, and even life itself, cannot be my disciple. Whoever does not carry the cross and follow me cannot be my disciple. For which of you, intending to build a tower, does not first sit down and estimate the cost, to see whether he has enough to complete it? Otherwise, when he has laid a foundation and is not able to finish, all who see it will begin to ridicule him, saying, ‘This fellow began to build and was not able to finish’…. So therefore, none of you can become my disciple if you do not give up all your possessions” (Lk 14:25-33).

Mother Teresa, I am sure, would have been happy to know of this Gospel on the Sunday of her canonization (whether or not she would have wanted such an honor from Rome): to leave home, then to leave the convent, to seek God in the streets, among the poorest. (I haven’t quite yet figured out how to preach on this Gospel on Sunday, to the gathered congregation in my parish, but it will be hard to soften the challenge of such words: Following Jesus is not for the faint-hearted; it is not about moderate measures; it is all or nothing. How to speak of such a high ideal, when it is so hard even to be moderately Christ-like in our daily lives?)

Much more can be said about Mother Teresa and her work—there have always been critics, and we must listen carefully to their complaints about her, and about how India often gets portrayed poorly in stories about her—but I will not take up such themes. Rather, I close by noting that, as you might have noticed, I did not end up acting just like Mother Teresa: I have remained a Jesuit; over the decades, I have returned to India many times, but only as a visitor. I did not dedicate myself to the poorest of the poor, but got a Ph.D. in Indian studies. I did not find a way to live among the poorest, living rather in Chestnut Hill at Boston College, and now in Cambridge, Mass., as a professor at Harvard. I spend my time not on the streets among the needy but in my office. I teach and I write books, not mop floors.

But I think, in my own way and by God’s grace, Mother Teresa’s good example set me on my course. Learning from the saints is rarely about literal imitation. We are not meant to be exactly like her, or Francis of Assisi or Gandhi or Dorothy Day or Thomas Merton, or even exactly like Jesus but rather, in a similar way to take up “our” cross—not their crosses—and live out our own calling in the most compelling, whole-hearted way each of us can. We all have a “call with a call” waiting for us. Mother Teresa, by her life and witness, is really reminding us to answer that personal call, in the radical way that only you and I can. To be a (canonized) saint is not to be on a pedestal or a blueprint for others to follow but rather a kind of light, to show us how to walk our own ways of holiness.

Francis X. Clooney, S.J.
Show Comments (
3
)
Comments are automatically closed two weeks after an article's initial publication. See our comments policy for more.
Crystal Watson
5 years 1 month ago
I've been pretty disillusioned by the negative stuff I've read about her. It seems like it should matter as far as sainthood goes that the people at her institution didn't get good medical care, that apparently there were coerced conversions of some of those patients, that there were questions about her financing, that she had what seems to me a disturbing attitude towards suffering. I realize she has inspired a lot of people, but all I can feel about her is disappointed.
michael iwanowicz
5 years 1 month ago
Fr. Clooney writes here prior to preaching in Our Lady of Sorrows on Sept. 3. His homily was based in part on this essay. I await my own 'call with a call:...
PJ Johnston
5 years 1 month ago
Thank you for this, Fr. Clooney.