Confessions of a guitar-Mass Catholic 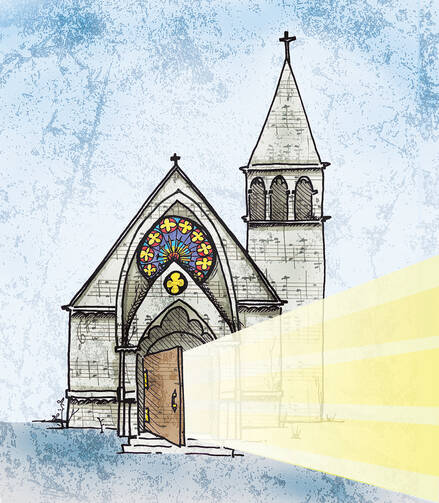 I grew up in the 1960s and ‘70s in western suburban Cincinnati, where my Catholic identity took shape at Our Lady of Victory Parish. My mother almost always attended high Mass early on Sundays, but my dad and I usually went to the guitar Mass later in the morning. The first floor of our parish’s recently constructed school building functioned as a temporary “new” church, where most liturgies were held, but our pastor decided that the soon-to-be-condemned, 100-year-old gothic church was the more appropriate venue for the Masses with guitar-playing hippies.

In the old church there was occasionally no heat and never enough light, but there were also no confusing half-Latin/half-English missals or hymnals. Instead, there were hundreds of red Duo-Tang folders waiting to be picked up at the entrance, the kind with the metal prongs in the middle, holding purple-inked pages from the spirit duplicator of lyrics by artists everyone knew: Bob Dylan; the Beatles; Crosby, Stills and Nash; Simon and Garfunkel; Peter, Paul & Mary. Theirs were the songs that colored my celebration of Mass as a child. I pondered and prayed over what I would do if I actually had a hammer, what the sounds of silence were and what it was that I could teach my parents. It would be many years before I no longer looked forward to going to Mass, because what I experienced each week in that old church was a solid sense of peace and wholeness. I knew God was with us, and life was everything it was ever supposed to be while I was singing at Mass alongside my dad.

When I was a fifth grader in 1972, the decision was made, because of the deteriorating condition of the building, to close the old church for all liturgies after midnight Mass on Christmas Eve. The school still held music classes in the church and art classes in the basement for the rest of the school year.

That spring, my two friends and I signed up for our grade school variety show and were told we could rehearse after school in the old church until the janitor locked the doors at 4 p.m. So each afternoon we put the crumbling plaster on the vaulted ceiling to the test as it tried to contain the passionate strains of one 10-year-old with an accordion and her two friends belting out “From the halls of Montezuma to the shores of Tripoli….”

Now, in 2016, I cannot fathom how it was that three fifth-grade girls were allowed to spend hours unsupervised in a dilapidated old church, but as they say, “It was the ‘70s.”

I recall unlatching and pushing open the gates of the Communion rail, through which we boldly entered what had always been a forbidden zone. We figured out how to work the push-button light switches in the sacristy so we could investigate every cabinet and secret compartment. We posed like statues in the empty niches from which the real statues had been removed, and we even dared each other to open the priest’s door of the confessional. None of us were brave enough to do that.

More than once I ran my hands over the detailed relief sculpture of the Last Supper carved into the front of the altar, fingers lingering on the bearded faces of Jesus and his friends. I remember thinking it was a shame that there were no girls allowed at such an important event, but I never once wondered why they were all squeezed together on just the one side of the table.

I remember touching everything, curious and awestruck, seduced by the access to what I would never be allowed to get close to in the “new” church across the parking lot, and by everything a temporary church could never be. The frescoes of the winged lion and winged bull above the altar looked so much more alive to me standing below them than they did from the nave. And the high altar that had always appeared so pointy and severe from the pews was much less intimidating up close. I had imagined it would be cold to the touch, but it was warm, painted wood, not marble.

I loved being in that old church. I loved its creakiness, its heaviness. I loved the vestiges of the personal histories that lived in there. The familiar family names glazed into the stained-glass windows, the sturdy spring clips on the backs of the pews that had held a thousand hats and purses, and the little frames that had at one time reserved certain pews for a certain few contributors. Mostly, I loved the memories of voices singing together, thoughtfully and joyfully, to the warm and inviting music of the guitar Masses, everyone holding hands and people actually smiling during Mass.

I didn’t simply feel as if I belonged to that church, I felt that the church belonged to me.

My family moved to a new house a few years later. We joined another parish as I began high school, and the old O.L.V. church was torn down in 1977. It was many years before I could even drive by the campus, and I went inside the church that was built on the site of the old church for the first time just last year to attend a Mass in memory of my parents.

Time marches on. Structures are built and demolished, traditions develop and evolve. For some in the “reform of the reform” wing of the church, I’m sure, I could be the poster child for a whole generation of misguided Second Vatican Council Catholics, the personification of everything that went wrong with the Novus Ordo liturgy. I understand the criticisms of what happened in the American Catholic Church in the late ‘60s and ‘70s, and it makes me sad that so many people felt angry and betrayed by the changes in their church. But the seeds of grace that were planted in me at the guitar Masses in the old Our Lady of Victory Church almost 45 years ago grew and continue to bear fruit to this day. Those simple childhood graces now keep me rooted in my faith when the church’s adult complexities fail me.

I experienced as a child a true, intimate connection with God (a “one-ing,” Julian of Norwich might say) through sacred space and music, through touch and sight and sound. Now, when life isn’t everything it is supposed to be, I can recall those times and those feelings of peace and wholeness and reconnect with God, not as a 10-year-old, but as an adult confident in the enduring gift of God’s grace.

Lisa Middendorf Woodall has been the coordinator of religious education at John Paul II Catholic School in Cincinnati since 2009. She expects to receive a master’s degree in theology at Xavier University this year.