Pope Francis' address to the Jesuits on the anniversary of their restoration.

Pope Francis' address to the Jesuits on the anniversary of their restoration. 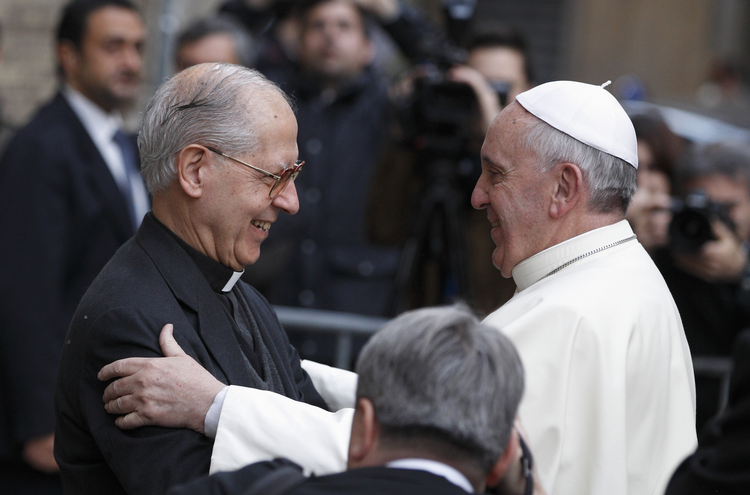 Pope Francis greets Father Adolfo Nicolas, superior general of the Society of Jesus, as he arrives to celebrate Mass at the Church of the Gesu in Rome Jan. 3. The pope celebrated Mass with 300 of his Jesuit confreres in thanksgiving for the recent canoni zation of Jesuit St. Peter Faber. (CNS photo/Paul Haring)

"Jesuits 'brave and expert rowers' in barque of Peter...Row then! Row, and be strong, even in the headwind!"

Pope Francis celebrated a special liturgy of thanksgiving in the Church of the Gesù in Rome on Saturday, to mark the 200th anniversary of the restoration of the Society of Jesus. Please find, below, Vatican Radio's English translation of the prepared text of the Holy Father's homily for the occasion.

Dear brothers and friends in the Lord,

The Society under the name of Jesus has lived difficult times of persecution. During the leadership of Father Lorenzo Ricci, enemies of the Church succeeded in obtaining the suppression of the Society (John Paul II, Message to Father Kolvenbach, July 31, 1990) by my predecessor Clement XIV. Today, remembering its restoration, we are called to recover our memory, calling to mind the benefits received and the particular gifts (cf. Spiritual Exercises, 234). Today, I want to do that here with you.

In times of trial and tribulation, dust clouds of doubt and suffering are always raised and it is not easy to move forward, to continue the journey. Many temptations come, especially in difficult times and in crises: to stop to discuss ideas, to allow oneself to be carried away by the desolation, to focus on the fact of being persecuted, and not to see the other. Reading the letters of Father Ricci, one thing struck me: his ability to avoid being harnessed by these temptations and to propose to the Jesuits, in a time of trouble, a vision of the things that rooted them even more in the spirituality of the Society.

Father General Ricci, who wrote to the Jesuits at the time, watching the clouds thickening on the horizon, strengthened them in their membership in the body of the Society and its mission. Here it is: in a time of confusion and turmoil he discerned. He did not waste time discussing ideas and complaining, but he took on the charge of the vocation of the Society.

And this attitude led the Jesuits to experience the death and resurrection of the Lord. Faced with the loss of everything, even of their public identity, they did not resist the will of God, they did not resist the conflict, trying to save themselves. The Society, and this is beautiful, lived the conflict to the end, without minimizing it. It lived humiliation along with the humiliated Christ; it obeyed. You never save yourself from conflict with cunning and with strategies of resistance. In the confusion and humiliation, the Society preferred to live the discernment of God's will, without seeking a way out of the conflict in a seemingly quiet manner.

It is never apparent tranquility that satisfies our hearts, but true peace that is a gift from God. One should never seek the easy "compromise" nor practice facile irenicism. Only discernment saves us from real uprooting, from true "suppression" of the heart, which is selfishness, worldliness, the loss of our horizon. Our hope, is Jesus; it is only Jesus. Thus Father Ricci and the Society during the suppression privileged history rather than a gray little tale, knowing that love judges history and that hope - even in darkness - is greater than our expectations.

We can review briefly this process of discernment and service that this Father General indicated to the Society. When in 1759, the decrees of Pombal destroyed the Portuguese provinces of the Society, Fatherr Ricci lived the conflict, not complaining and letting himself fall into desolation, but inviting prayers to ask for the good spirit, the true supernatural spirit of vocation, the perfect docility to God's grace. When in 1761, the storm advanced in France, the Father General asked that all trust be placed in God. He wanted that they take advantage of the hardships toward a greater inner purification; they lead us to God and can serve for his greater glory. Then, he recommended prayer, holiness of life, humility and the spirit of obedience. In 1760, after the expulsion of the Spanish Jesuits, he continued to call for prayer. And finally, on February 21, 1773, just six months before the signing of the Brief Dominus ac Redemptor, with the utter lack of human help, he sees the hand of God's mercy, which invites those, who submit to the test, not to confide in anyone but God. Trust must grow precisely when circumstances throw us to the ground. Of importance for Father Ricci is that the Society, until the last, is true to the spirit of its vocation, which is for the greater glory of God and the salvation of souls.

The Society, even faced with its own demise, remained true to the purpose for which it was founded. To this, Ricci concludes with an exhortation to keep alive the spirit of charity, unity, obedience, patience, evangelical simplicity, true friendship with God. Everything else is worldliness. The flame of the greater glory of God even today flows through us, burning every complacency and enveloping us in a flame, which we have within, which focuses us and expands us, makes us grow and makes us shrink.

In this way, the Society experienced the supreme test of the sacrifice unjustly asked of it, taking up the prayer of Tobit, who with a soul struck by grief, sighs, cries and then prays: "You are righteous, O Lord, and all your deeds are just; all your ways are mercy and truth; you judge the world. And now, O Lord, remember me and look favorably upon me. Do not punish me for my sins and for my unwitting offenses and those that my ancestors committed before you. They sinned against you, and disobeyed your commandments. So you gave us over to plunder, exile, and death, to become the talk, the byword, and an object of reproach among all the nations among whom you have dispersed us. It concludes with the most important request: Do not, O Lord, turn your face away from me." (Tb 3,1-4.6d).

And the Lord answered by sending Raphael to remove the white spots from Tobits eyes, so that he could once again see the light of God. God is merciful, God crowns with mercy. God loves us and saves us. Sometimes the path that leads to life is narrow and cramped, but the tribulation, if lived in the light of mercy, purifies us like fire, it gives us much consolation and inflames our hearts, endearing prayer to it. Our brother Jesuits in the suppression were fervent in the spirit and in the service of the Lord, rejoicing in hope, constant in tribulation, perseverant in prayer (cf. Rom 12:13). And that gave honour to the Society, but certainly not the praise of its merits. It will always be this way.

Let us remember our history: the Society was given the grace not only to believe in the Lord, but also to suffer for His sake (Philippians 1:29). We do well to remember this.

The ship of the Society has been tossed around by the waves and there is nothing surprising in this. Even the boat of Peter can be tossed about today. The night and the powers of darkness are always near. It is tiring to row. The Jesuits must be brave and expert rowers(Pius VII, Sollecitudo omnium ecclesiarum): row then! Row, be strong, even with the headwind! We row in the service of the Church. We row together! But while we row - we all row, even the Pope rows in the boat of Peter - we must pray a lot, "Lord, save us! Lord save your people." The Lord, even if we are men of little faith, will save us. Let us hope in the Lord! Let us hope always in the Lord!

The Society, restored by my predecessor Pius VII, was made up of men, who were brave and humble in their witness of hope, love and apostolic creativity, that of the Spirit. Pius VII wrote of wanting to restore the Society to "support himself in an adequate way for the spiritual needs of the Christian world, without the difference of peoples and nations" (ibid). For this, he gave permission to the Jesuits, which still existed here and there, thanks to a Lutheran monarch and an Orthodox monarch, "to remain united in one body." That the Society may remain united in one body!

And the Society was immediately missionary and made itself available to the Apostolic See, committing generously "under the banner of the cross for the Lord and His Vicar on earth" (Formula of the Institute, 1). The Society resumed its apostolic activity of preaching and teaching, spiritual ministries, scientific research and social action, the missions and care for the poor, the suffering and the marginalized.

Today, the Society also deals with the tragic problem of refugees and displaced persons with intelligence and industriousness; and it strives with discernment to integrate service to faith and the promotion of justice in conformity with the Gospel. I confirm today what Paul VI told us at our 32nd General Congregation and which I heard with my own ears: "Wherever in the Church, even in the most difficult and extreme situations, in the crossroads of ideologies, in the social trenches, where there has been and there is confrontation between the deepest desires of man and the perennial message of the Gospel, there you have been and there are Jesuits. "

In 1814, at the time of the restoration, the Jesuits had a small flock, a "small Society," but which knew how to invest, after the test of the cross, in the great mission of bringing the light of the Gospel to the ends of the earth. This is how we must feel today therefore: outbound, in mission. The Jesuit identity is that of a man who loves God and loves and serves his brothers, showing by example not only that in which he believes, but also that in which he hopes, and who is the One in whom he has put his trust (cf. 2 Tim 1:12). The Jesuit wants to be a companion of Jesus, one who has the same feelings of Jesus.

The bull of Pius VII that restored the Society was signed on August 7, 1814, at the Basilica of Saint Mary Major, where our holy father Ignatius celebrated his first Mass on Christmas Eve of 1538. Mary, Our Lady, Mother of the Society, will be touched by our efforts to be at the service of her Son. May she watch over us and protects us always.

Bob Baker
5 years 10 months ago
So it's a Lutheran monarch and an Orthodox monarch to blame....
Advertisement
More: Jesuits