Go Tweet it On the Mountain: Praying with the Bible in the Twitterverse 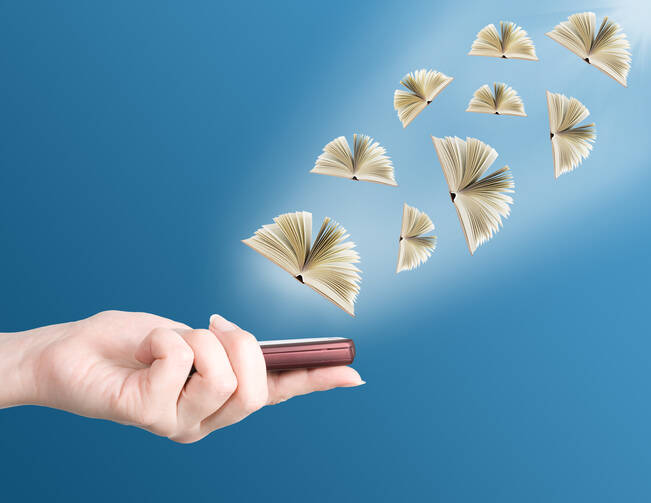 I joined Twitter because of a Catholic sister. In 2009, during the second half of the Pauline Year, Sr. Anne Flanagan of the Daughters of St. Paul encouraged me to try the fledgling medium. Twitter was like the Wild West of Scripture, where Catholic clergy and media outlets blogged alongside Biblical studies professors, pop stars and presidents. (I still haven’t figured out why Nicolas Sarkozy decided to follow me.) At first, Sister Anne was both my only follower and the only person I followed. However, as I began engaging others in conversation and sharing my own thoughts, I entered into Twitter’s spiritual community. It could be considered a modern manifestation of the “cloud of witnesses” mentioned in the Letter to the Hebrews.

Perhaps the most useful aspect of Twitter is its ability to convey scores of information in two sentences, a picture and a hyperlink. There isn’t room for rumination. One isn’t left to wonder, as one does when reading a Dickensian description of the spreading of butter, if authors are being paid by the word. Twitter transforms one into Hemingway: laconic and iconic. Twitter’s search feature quickly locates materials posted years earlier, allowing someone interested in the Church of the Holy Sepulchre to find pictures posted by lay pilgrims and bishops and to view videos of archeological reconstructions uploaded by pro Terra Sancta (@proterrasancta). Everyone can use Twitter to learn about the Bible and pray with it.

Prayers and scriptural passages tweeted after daily Mass imbue our busy lives with the meaning we usually find in chapel. Daily Mass, as daily congregants know, is normally half the time of Sunday Mass. There is no choir, the Communion line is shorter and personal intentions are often offered from the pews, not by the cantor. Intentions have to be short, because the community has to respond, “Lord, hear our prayer.” In a tweet, one can approximate this experience, but also build on it, by elaborating upon the scriptural passages read and the intentions offered in daily Mass.

Jesus spoke succinctly to capture the hearts of the people who listened to him. His pithy sayings have long been popular in the United States, which produced the first red-letter edition of the New Testament in 1899. However, even before Jesus’ words were printed in red, church scholars were interested in the agrapha. These are the sayings of Jesus found outside of the canonical Gospels in the New Testament and in patristic writings. Clement of Alexandria, for example, relates that Jesus instructed his followers: “Ask for the great things, and the small shall be added to you” (Strom. I,24,158). Twitter works a lot like an anthology of Jesus’ sayings. Each tweet serves as a tiny piece of a larger discourse. It is as though each blessing represents one hue of the rainbow stretching across the sky after a rainy day, keeping the clouds at bay.

When we use Twitter, we are following in the footsteps of Jesus giving the Sermon on the Mount. We are talking to people we may never have met before and who might not share our same cultural and intellectual history. In the Gospel of Matthew, chapter 5, Jesus goes up the mountain to give a speech, because Matthew wants to depict Jesus like Moses. Crowds flock to see him. Looking at the multitude, Jesus eschews an elegant, epic preamble like that of Lincoln’s “Gettysburg Address.” He recites blessings terse enough to fit into a 140-character tweet. They’re simple, direct and easily understood.

His first prayer exalts the humble: “Blessed are the poor in spirit, for theirs is the kingdom of heaven.” For Matthew, Jesus isn’t calling the poor blessed because his audience is poor—preaching to the choir, as it were. Rather, Matthew’s Jesus shows us the virtue of uplifting the meek and powerless on earth. Such an idea would have resonated with many groups in Jesus’ time. Before the birth of Jesus and independently of Christianity, Judaism arrived at a similar notion. From the righteous poverty of Job to the rabbinic idea of eschatological reversal, we find the idea that the poor on earth may still possess “treasure in heaven.” The Beatitudes dialogue across religions, reaching out to the ethical impulse embedded in every human. To share the Beatitudes on Twitter is to transform the Gospel into literary electronica, sending the Gospel tweet by tweet to large audiences and even to the ends of the earth.

Versatility is one of the hallmarks of Christianity. Twitter provides the techniques and flexibility necessary to interpret scripture for the modern world, just like Jesus did.  From the mountain, Jesus gives the crowds who have followed him beatitude after beatitude. After blessing those who mourn in the second beatitude, Jesus goes back to the idea he developed in his opening beatitude when giving his third: “Blessed are the meek, for they will inherit the earth” (Matt. 5:5). If these were tweets, Jesus’ disciples could retweet either the first blessing or the third. What matters is that Jesus is reinforcing a concern for the lowly and marginalized. His most careful followers should share this emphasis. Some might write tweets about the meek and the humble that follow each other in rapid succession. Others might insert a tweet on a different topic between the two tweets over the space of a few weeks. The ordering of the tweets or the beatitudes is not essential here.

Tweeting one’s prayers is a good way to pray intentionally, focusing on the specific teachings of Scripture. In many ways, these individual acts of biblical interpretation are necessary for the continuation of the faith. When he preaches the Sermon on the Mount, Jesus takes his disciples with him. In the Torah, as in modern life, we are left to our own devices—electronic and otherwise—when Moses goes up the mountain. If we want to prevent Moses from breaking his tablets at our worship of false icons, updating one’s status must become a spiritual practice. Praying through tweets represents a way to resist the sundry pushes and pulls of the mundane world. According to the philosopher Descartes, resistance entails maintaining one’s position with respect to another object. The world always moves; one must move simply to stay in the same place. Praying proves the false nature of idols, which only appear to hold the same static, unchanging position as the deity. Twitter, in encouraging us to compose and edit prayers, leads us to refine our positions and expand our knowledge of the Bible and its traditions.

Twitter offers a supportive and knowledgeable spiritual community to help achieve these goals. We rely on our “cloud of witnesses” (Heb. 12:1) to keep us marching away from Golden Calves and toward the Promised Land.  The daily readings are posted by the United States Conference of Catholic Bishops (@USCCB).  As we interact with scriptural passages, priests, deacons, women religious and brothers serve as resources and guides. Many Catholic scholars, such as John Martens (@BibleJunkies), are available to explain the literary and historical context of the readings and the relevance of recent archaeological finds.

When we interpret the Bible on Twitter, we can virtually experience the instructions for prayer in the New Testament. According to Matthew 18:20, Jesus promises to be among any two or three people gathered in his name. Likewise, 1 Corinthians 14:27 instructs two or three to speak at a time. Quality takes precedence over quantity. Success isn’t about how many retweets, favorites or followers one has. Sometimes, the best Twitter experiences come in chains of comments contributed by different individuals to a single tweet, with each thought bonding with the others like the organisms that band together to create coral reefs. By exploring the literary, historical, and archaeological facets of the Bible, we discover the transcendent meaning that persists over generations.

Janelle Peters is an instructor of humanities and philosophy at Lake Superior State University.

Show Comments (
1
)
Comments are automatically closed two weeks after an article's initial publication. See our comments policy for more.
Adam Molnar
8 years 3 months ago
My problem with Twitter is not length, but immediacy. The Bible authors did not instantaneously notify people about everything. "Lazarus came out! #miracle #raisedead #FourDays" They deliberately chose stories and sayings. Yes, many sayings are brief, but people took time to find the good phrasings. 2014 America needs slower speech, not quicker. Maybe Twitter could wait 12 hours to publish?