Did Jesus Have a Wife? No. 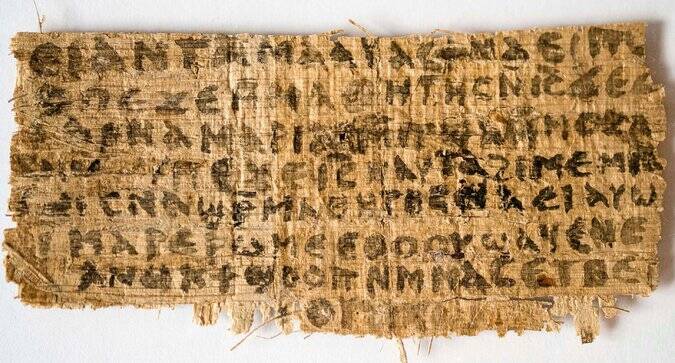 Reports today of the authenticity of a fragment of the so-called “Gospel of Jesus’s Wife,” which was originally unveiled in 2012 by the Harvard Divinity School professor Karen L. King, are sure to cause a rash of news stories and opinion pieces on whether Jesus was married.  So here’s my answer: No.

Before I talk about the reasons why almost every New Testament scholar believes that Jesus was unmarried, let me say that my faith does not rise or fall on whether Jesus was married.  The Christian faith is not based on Jesus’s celibacy, but on the Incarnation and the Resurrection.  In short, a married man healing the sick, stilling storms and raising the dead is just as impressive as an unmarried man doing so.  More to the point, if a married man himself rises from the dead after being in a tomb for three days, I would be following him. Married or unmarried, Jesus is still the Son of God.

Also, before I talk about the reasons scholars believe that he was almost certainly single, I should point out that the manuscript in question was written long after the canonical Gospels (Matthew, Mark, Luke and John) were written.  The fragment is most likely from the fourth to the eighth century.   By contrast, the earliest Gospel, Mark, was written in AD 75, only 40 years after Jesus’s time on earth.  The fragment in question, at its earliest, was written three hundred years after the canonical Gospels.  In general, it’s better to rely on sources closer to the actual events, particularly, as in the case of Mark, when there were people still alive who had known Jesus, and could presumably have corrected any inaccuracies in Mark's text.  Three hundred years later, people take many more liberties with he story.

Overall, it’s more likely that Jesus was unmarried.  How do we know this?  Here’s what I say in my new book, Jesus: A Pilgrimage

Now, it is almost certain that Jesus was celibate.  How do we know this?  For one thing, the Gospels talk about Jesus’s mother and “brothers and sisters” several times, so if he had a wife it would be odd not to mention her.  In his magisterial book A Marginal Jew, John Meier, a professor of New Testament at Notre Dame, and scholar of the “historical Jesus,” suggests that being unmarried was seen as undesirable for most rabbis of the time, and even though Jesus is not technically a rabbi, it would have been strange for the Gospel writers to concoct a story that he was celibate if he was in fact married. The Gospels’ silence about a wife and children likely means that Jesus had neither.

What are some possible reasons for Jesus’s remaining unmarried?  He may have intuited that once he started his ministry it would be short or even meet a disastrous end. As a Jew, knew the fate of other prophets.  Jesus may have foreseen the difficulty of caring for a family while being an itinerant preacher.  Or perhaps his celibacy was another manifestation of his single-hearted commitment to God.  After sifting through the facts, Meier lands on the last reason: “The position that Jesus remained celibate on religious grounds [is] the more probable hypothesis.”

Other theories, where Mary Magdalene is proposed as Jesus’s wife, are also rather far-fetched.  Most women and women disciples in the New Testament are referred to, by the convention of their time, as “the wife of” or “the mother of.” In a patriarchal world, they were most often identified through their associations with either a husband or a son (or sons).  So we read of women like “Mary, the wife of Clopas” and “Joanna, the wife of Chusa.” Consequently, it is more likely that if Mary Magdalene were married to Jesus she would be called not "Mary of Magdala," but “Mary, the wife of Jesus.”

Also, in terms of the Passion narratives, which Christians will read during Holy Week, the Gospels place several important women at the scene of Jesus's death, at foot of the Cross.  The Gospel of John, written in roughly AD 100, reports the following women as present at the Crucifixion: “his [Jesus's] mother, and his mother’s sister, Mary the wife of Clopas and Mary Magdalene.”  An even earlier Gospel, Matthew, written around AD 85, says that there were “many women,” and then lists those the Gospel writer considers important: “Mary Magdalene, and Mary the mother of James and Joseph, and the mother of the sons of Zebedee.”  Were Jesus married, not mentioning “the wife of Jesus" in either the stories of the Crucifixion or the Resurrection would be odd indeed.

Nearly every scholar believes that Jesus was unmarried.  So do I.  As I said, my faith does not rest on his being unmarried--but my reason tells me that he was.

James Martin, S.J.
@jamesmartinsj
Show Comments (
34
)
Comments are automatically closed two weeks after an article's initial publication. See our comments policy for more.
Raymond Glennon
8 years 1 month ago
Thanks for this timely and cogent piece. Greatly appreciated in this time of overheated media coverage of anything that might be used to make believers look "foolish" rather than followers of Jesus and "fools for God." Ray Glennon Twitter: @RayGlennon
Anne Chapman
8 years 1 month ago
It is doubtful that anyone will ever be able to prove anything about Jesus' marital status. Perhaps he was once married and was a widower at the time he began his ministry - which he started quite late, by the standards of the day. He was 30 then, and most people married in their early teens, shortly after puberty. Jesus must have had some type of work in the many years before his public ministry, between the ages of 12 and 30. Some think he might have been a carpenter like Joseph since boys often followed their father's profession. And it is also likely that he would have followed tradition and married while a teenager. Life was far more precarious then than now and average lifespan at birth (because of the high risk of death from disease or accident) was less than 40 years, although those who survived to adulthood had a better chance at a longer life . But, it was even more dangerous for women. Thoughout most of history many women have died young from complications of pregnancy/childbirth. If Jesus did marry at the expected age (while a young teen), he could easily have been widowed by the time he was 30 and possibly long before that. But, there is no historical evidence of this, nor is there evidence that he never married. This is not unusual - there is no historical evidence of a great deal about Jesus that christians take "on faith". I don't see what holding either belief (whether or not he ever married) has to do with looking "foolish" or being followers of Jesus. Perhaps you could explain?
William Nassari
8 years 1 month ago
Faith aside, it's still inconclusive that Jesus was or was not married. But other great religions were founded by married men, some married to more than one woman.
Reyanna Rice
8 years 1 month ago
Father Jim, I would like to say something about this sentence in your article: "Or perhaps his celibacy was another manifestation of his single-hearted commitment to God." Celibacy is not the only way to have a single-hearted commitment so I hope that is not your thought. One can have this same commitment in marriage. It is achieved through one's single-hearted commitment to one's spouse. They are for us the very image of God in our lives. And marriage is about redemption. In and through each other we redeem one another. In a good long marriage, much comes into your life, some of it good and some of it bad. I was married for 40 years to a wonderful man, watching him die at the end from acute myelogenous leukemia. We truly redeemed each other through all of that, holding each other up to the very end. Neither of us felt that we did not have a single-hearted commitment to God, because we knew we were touching God every day as we loved and cared for each other and our family I think the church sometimes kinda forgets, that posing celibacy over the years as the somehow more committed way. It has gotten better over the years about recognizing the married state as a try vocation. For many years it was liked down upon as second and best, that somehow if you chose marriage you were not strong enough in your commitment to God, sorta a second -class state of life.
James Martin
8 years 1 month ago

No, that's definitely not what I meant.  There are many ways of being committed to God.  I said it was his way.