How I teach ‘Humanae Vitae’ 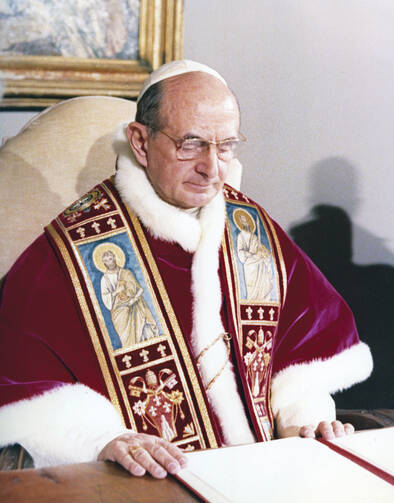 When I teach the papal encyclical “Humanae Vitae,” published in 1968, I usually do so with a class of undergraduate students at Boston College. I teach it after studying with them five other noteworthy texts: the two creation accounts in Genesis, the teachings on marriage and sexuality by Paul and then by Augustine, and finally the papal encyclical, “Casti Connubii” (1930).

In many instances I try to teach them how to read and understand “Humanae Vitae” as a real, authoritative document. I lead them, as I do here, through the document, paragraph by paragraph (indicated by the numbers in parentheses).

First, I explain to them who wrote it and to whom. I have them see that the encyclical, that is, the papal letter, was written to brother bishops, clergy, Catholic laity and to all people of good will. I help them understand the different hierarchical levels of the audience. I also explain that the universal audience reflects the conviction of the pope and, indeed, the Catholic tradition, that such natural law teachings are not simply for Catholics but for all persons, since these teachings are from right reason.

In many instances I try to teach them how to read and understand “Humanae Vitae” as a real, authoritative document.

I then try to explain that “Humanae Vitae” was a document that was responding to the signs of the times; it was written in response to questions that were raised most notably by the invention and marketing of the birth control pill. The pill, like many other inventions, gave humanity the opportunity to dominate and rationally organize the forces of nature such that, we could now “extend this control over every aspect” of our own lives (No. 2). In one sense the document is specifically reflecting on birth control, but in a broader sense, the pope is asking the fundamental question of whether every invention is in itself worthy.

In teaching the encyclical I often find that students today do not appreciate the specific concern of the encyclical. They tend to think that the letter was about the birth control pill. I tell them it was about married people who were wondering about the use of contraception for the purpose of responsible parenting.

I then remind them that church teaching upholds marriage as the only legitimate context for sexual activity between a man and a woman. That is, I reiterate church teaching about the rightness of chastity and the wrongness of sex outside of marriage. Here, then, I note that the church was not considering whether birth control in any context was legitimate, but whether married couples alone could use it. No one, I remind them, was asking the more general question (“Can anyone use birth control?”) simply because contraception could only have been entertained as morally legitimate in the context of marriage, where sexual intimacy is permissible. This helps open their eyes to the many, many references to “married love” made in the encyclical.

“Humanae Vitae” was a document that was responding to the signs of the times; it was written in response to questions that were raised most notably by the invention and marketing of the birth control pill.

I also introduce them to an argument, the principle of totality, which was current in the 1960s. This principle follows from a metaphysical insight that the whole is greater than the sum of its parts, and that therefore if a married couple is committed to having children, they do not need to leave each and every act of sexual love open to procreation. In other words, the principle of totality lets married couples believe that “procreative finality applies to the totality of the married life rather than to each single act” (No. 3). According to this argument, Christian marriage could be open to contraception in specific circumstances, but not in the marriage as a total reality. I alert them to the fact that later in the encyclical the pope rejects this use of the principle.

I note the authority of the church’s competency to teach the natural law and that adherence to the law is required for our salvation (No. 4). I similarly note the commission that Pope John XXIII established for the study of the correct regulations of births and that Pope Paul VI confirmed and expanded that commission (No. 5). I add that my own life was affected by two members on that commission: John Ford, S.J., whose position at Weston Jesuit School of Theology I later held, and Josef Fuchs, S.J., with whom I did my dissertation. I describe the very different roles they ended up having as members of the commission.

I note that the commission produced a majority report influenced by Father Fuchs, among others, suggesting that married couples could regulate the ordering of the birth of their children through contraception, and a minority report influenced by Father Ford that contended against this position. I add that the pope saw in the disagreement the need to personally examine this question, particularly in light of the “moral doctrine on marriage constantly taught by the magisterium of the church” (No. 6). Having covered this background, I turn to the doctrinal principles of the encyclical.

I note that a new development emerges immediately in this section. The encyclical talks about sexual intimacy not as a right or a duty, nor as permissible or tolerable, as theologians and bishops had in earlier days. Nor does the document immediately turn to procreation as the primary end of marriage, as it did in “Casti Connubii.” Rather it turns to “married love,” which derives its nature and nobility from God who is love (No. 8, reiterated in No. 11). I have my students study how the encyclical specifically describes this love: friendship, faithful, exclusive and fecund (No. 9). I turn then to the question of the ordering of births in responsible parenthood. Here I focus on the notion of an objective moral order, a concept the students reasonably acknowledge and respect (No. 10).

I then have them study paragraph 11. Here I highlight the natural law’s recognition of the “intrinsic relationship” between sexual activity and procreation. While the encyclical acknowledges that any natural infertility does not compromise the moral legitimacy of sexual intimacy in marriage, still, “each and every marital act must of necessity retain its intrinsic relationship to the procreation of human life” (No. 11). Here the encyclical instructs us on the two-fold, inherent significance of marital, sexual activity as unitive and procreative. There are no moral grounds for breaking this bond (No. 12).

The magisterium then demonstrates the rationality of its argument. Just as a sexual act with an unwilling spouse is no true act of love, so too a conjugal act that “impairs the capacity to transmit life” “frustrates” God’s designs and “contradicts the will of the Author of life” (No. 13). In highlighting the moral limits of our actions, the encyclical returns to an earlier observation: just as we do not have an unlimited domination of our lives, so too we cannot claim an unlimited dominion over our sexual faculties.

The document then specifically enunciates those activities that are by no means legitimate for the regulation of births. First, it names “the direct interruption of the generative process already begun,” above all “direct abortion”; then it re-declares its opposition to direct sterilization. Finally, it declares: “Similarly excluded is any action which either before, at the moment of, or after sexual intercourse, is specifically intended to prevent procreation—whether as an end or as a means.” It then names certain casuistic principles that cannot be invoked in order to legitimate deliberately contraceptive conjugal activity: lesser evil, totality and toleration (No. 14).

In one sense the document is specifically reflecting on birth control, but in a broader sense, the pope is asking the fundamental question of whether every invention is in itself worthy.

It does, however, acknowledge that it “does not consider at all illicit the use of those therapeutic means necessary to cure bodily diseases, even if a foreseeable impediment to procreation should result there from—provided such impediment is not directly intended for any motive” (No. 15). This paragraph highlights an important distinction, first articulated, as the encyclical notes, by Pope Pius XII.

As a theologian who has worked in the area of H.I.V./AIDS, trying to combat stigma, while advocating for proper education and equal accessibility to treatment for all people, I have also espoused a comprehensive prevention strategy, which includes the use of the condom, not as a contraceptive, but as a preventive or prophylactic device. This certainly applies in the case of a discordant couple (where one spouse is H.I.V. positive and the other is not) who are infertile, whether by illness, accident or age. Certainly such a couple using a condom in their marital intimacy are not in any way using the device as a contraceptive. As such, it is not an immoral activity.

Paragraph 15, I think, may be applied to those discordant married couples who may be fertile. “Humanae Vitae” does not prohibit the discordant couple from engaging in sexual intimacy while using a condom solely to prevent the transmission of the virus and not in any deliberately contraceptive way.

I think it is worth noting that I have continuously upheld the teaching of “Humanae Vitae” and through it, I have also spoken, for 25 years, about the moral legitimacy of a comprehensive H.I.V. prevention strategy, that insists on marital fidelity, abstinence of sexual relations outside of marriage and the human dignity of the person, while including the use of the condom solely as a strategy to prevent disease in the context of the loving intimacy of discordant couples.

The document moves to its conclusion with warnings about the social repercussions of legitimating contraceptive activity and reminding readers of the limits of human power (No. 17). It also acknowledges that its position toward the natural law is not to be its arbiter, but rather its “guardian and interpreter”(No. 18).

In its last section on pastoral directives, the encyclical urges all to appreciate the law of God (No. 20), the value of self-discipline (No. 21) and the relevant need to promote chastity. It appeals to public authorities to seek true solutions to overpopulation and to scientists to study “natural rhythms” so as to “succeed in determining a sufficiently secure basis for the chaste limitation of offspring” (No. 24). It positively admonishes couples struggling with the matter (No. 25) and exhorts priests (No. 28) and bishops (No. 30) to minister well and to uphold the constant teaching of the church.

I find that following this close textual approach gives my students full appreciation of the teaching and the doctrine of “Humanae Vitae.”