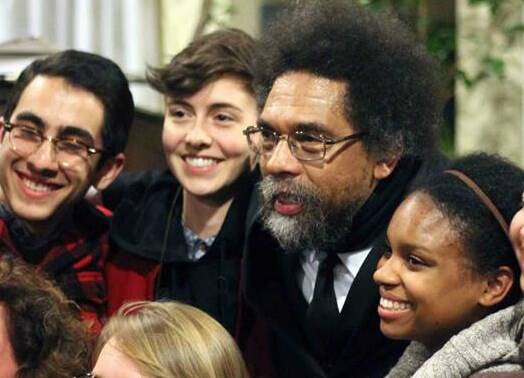 Last month the Catholic Worker communities in New York City celebrated the 116th birthday of co-founder Dorothy Day in style. The evening began, appropriately, with a beautiful liturgy in the dining room of Maryhouse, the house where Dorothy lived for the last several years of her life. The presider was George Anderson, S.J., a former associate editor of America and a longtime friend of the Catholic Worker.

Dr. Cornel West, the evening’s special guest, was on hand to pay tribute to Dorothy. After the Mass, he delivered a rousing 45-minute talk about Dorothy’s life and legacy in a packed, standing-room-only auditorium of Maryhouse. Dr. West, a professor of philosophy and Christian practice at Union Theological Seminary, has taught at Princeton, Yale, Harvard and the University of Paris, and is the author of 19 books, including Race Matters (1994) and Democracy Matters (2005).

Thankfully, Ed Briody captured the talk on video, and our friends at the Catholic Worker were kind enough to make the video available to America to share with our readers. In the talk, titled “Dorothy Day: Exemplar of Truth and Courage,” Dr. West describes his connection with the Catholic Worker movement and what he most admires in Dorothy. He makes several references to The Long Loneliness and refers to Dorothy as one of the most prophetic American voices of the 20th century. “Dorothy Day understood that if you’re gonna be a death wrestler,” he said, “you’re going to spend a lot of time on the margins, in prisons, and on your way to a cross.” Dorothy “never sold out, she held onto her integrity, until the very end. She wrestled with nihilism, she wrestled with melancholy, she wrestled with despair and darkness and bleakness, but she allowed the love, the community, to have the last the words.”

Listening to Dr. West speak is deceptively easy. It feels more like jazz than a lecture. But if you let those buttery words sit for a bit, they become hard; and they challenge even those—perhaps especially those—who agree with his message. How do we learn to die to ourselves, our prejudices, our insecurities? Thankfully, Dr. West was kind enough to supply the answer: Try again, fail again, fail better.

Olga Segura, one of my colleagues at America, said she has admired Dr. West ever since she read Race Matters during her freshman year at Fordham University. “It was moving and inspiring to finally meet him,” she said. “His talk challenged me to reevaluate many of my political convictions, to see them in a different light.”

I hope the availability of Mr. West’s talk presents the same opportunity for our readers. The video of the talk, in four parts, is available here: