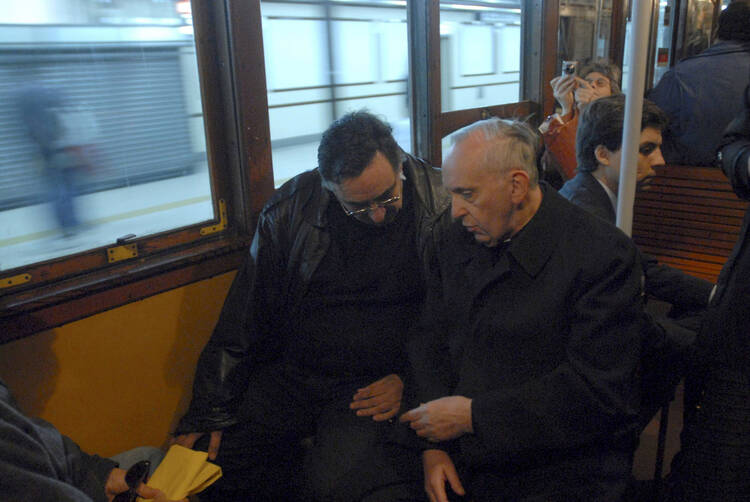 In addition to Pope Francis (created a cardinal in 2001), there are currently five cardinals, 18 archbishops and 51 bishops. The living cardinals are:

Only one Jesuit cardinal participated in the recent conclave, namely Cardinal Jorge Mario Bergoglio. The other Jesuit Cardinal entitled to participate, Cardinal Julius Riyadi Darmaatmadja, former Archbishop of Jakarta (Indonesia), was unable to attend due to ill health.

The first Jesuits to be made bishops were in the time of Ignatius in 1554; they were Nunes Barreto, Andres de Oviedo and Melchor Carneiro. They were chosen “for an ill-fated mission to Ethiopia” in cooperation with King John III of Portugal. Only Oviedo reached Ethiopia. The mission was a total failure.

Since the beginning of the Society, there have been about 367 Jesuit bishops (including living and dead). Jesuit cardinals are for the most part already included in this number.

Two questions might be asked about Jesuits in the hierarchy:

1. Under this Jesuit pope, will more Jesuits be appointed bishops or cardinals?

2.  What is the relation of a Jesuit , bishop or cardinal and now pope to the General of the Society of Jesus?

In regard to the first question, we recall that Jesuit priests at the time of their solemn and final profession in the Society of Jesus promise:

I also promise that I will never strive for or ambition any prelacy or dignity outside the Society; and I will to the best of my ability never consent to my election unless I am forced to do so by obedience to him who can order me under penalty of sin. And moreover, if I shall find out that anyone [another Jesuit] is seeking to secure anything of the two aforementioned things or is ambitioning them, I promise that I will communicate his name and the entire matter to the Society or its Superior.

This is based upon the Jesuit Constitutions S.J., (Part X, N°6 [817]), and the experience of St. Ignatius as found in several strong letters in which he fought against Jesuits being made bishops.

But now that we have a Jesuit pope, the question is: knowing our tradition, and knowing how St. Ignatius fought strongly against Jesuits becoming bishops, will the pope appoint Jesuits to be bishops?

The second question: how does a Jesuit  who is made a bishop or cardinal regard the General of the Jesuits? To cover this possibility, the Jesuit promises:

In addition, I promise that if despite the third vow, I should happen to be ordained a bishop, I shall not refuse to listen to the General of the Society, if he, personally or through someone else of the Society, will do me the favor of giving me some counsel.

Peter Schineller, S.J., is the archivist for the New York Province of the Society of Jesus.

Peter Schineller
Show Comments (
1
)
Comments are automatically closed two weeks after an article's initial publication. See our comments policy for more.
Joseph Phelan
9 years 3 months ago
Pete, Thanks for keeping us informed.. These questions have popped up on several occasions since Pope Francis election. Joe Regis