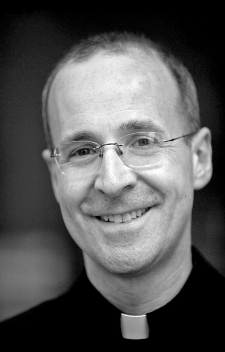 As you may have already concluded from my lack of the title “Cardinal,” I’m not eligible to vote in the upcoming conclave. Nonetheless, like every sentient Catholic, I have plenty of ideas about who the next pope should be and what he should do.

Not surprisingly, we have received many inquiries here at America from the media about those very questions. The morning that Pope Benedict XVI announced his resignation I fielded a call from one journalist who asked me what the top three qualifications might be for the next pope. “Well, first,” I said, “he has to be a holy person. Second, he needs to be able to preach the Gospel effectively. And third, he must have the ability to work within a variety of cultures.” There was an uncomfortable pause on the other end of the line. “Father, I can’t just write that he needs to be holy,” he said. “I was hoping you would talk about something like women’s ordination and birth control.”

So much for holiness.

There are many challenges facing the church that I hope the next pope will take up. (My list is too long for a column.) But as the conclave approaches, I think less about issues and more about the person. Few can predict what will occupy the working days of the next vicar of Christ, and none of the cardinal-electors has the gift of foresight. So besides considering where a candidate stands on the burning topics and sizing up his skills (administrative and otherwise), it is important to look at the spiritual qualities of the man: his prayerfulness, his freedom, his awareness of his own reliance on God. In a word, his holiness.

Let me add another quality that makes for a holy person: a sense of humor. I can think of no other job that so requires a keen sense of humor as being pope. It is an absolutely essential requirement for sustaining at least a modicum of humility. After all, it must be difficult not to get a swelled head when people kiss your ring and call you “Your Holiness” or “Holy Father.” (Frankly, one of my fantasies about what I would do as pope would be to say, “I’m not crazy about that second title. You have only one father in heaven—as my boss said.”)

Besides fostering humility, self-deprecating humor puts others at ease. One model for papal humor is Pope John XXIII, who during his pontificate demonstrated a flair for self-deprecation. Once, after his microphone failed at a public event, he said to the crowd, “Don’t worry about not hearing what I was saying. You didn’t miss anything. I didn’t say anything interesting anyway.” Archbishop Fulton Sheen, for 20 years host of a popular radio broadcast and then on television in the early 1950s and again in the 1960s, related that John XXIII once said to him: “From all eternity, God knew that I was going to be pope. He had 80 years to work on me. Why did he make me so ugly?”

Are there any papal candidates who fulfill the “sense of humor” requirement? I’m not as familiar with the papabili as John L. Allen Jr., Thomas J. Reese, S.J., or Robert Mickens, so I can’t tell you if Cardinal Gianfranco Ravasi is a hoot or Cardinal Angelo Scola knows any good knock-knock jokes. But there is at least one man who fits the bill: Cardinal Timothy J. Dolan of New York. When I was on his radio show last year, Cardinal Dolan related that when he was archbishop of Milwaukee, he met with Pope John Paul II and shared some good news with him. “Your Holiness,” said Dolan, “the Archdiocese of Milwaukee is growing!” John Paul looked him over and said, “So is the archbishop!”

If the cardinals don’t believe me, then maybe they should believe their former boss. In an interview given during his pontificate, Pope Benedict XVI shared this reflection:

I believe [God] has a great sense of humor. Sometimes he gives you something like a nudge and says, ‘Don’t take yourself so seriously!’ Humor is in fact an essential element in the mirth of creation. We can see how, in many matters in our lives, God wants to prod us into taking things a bit more lightly, to see the funny side of it, to get down off our pedestal and not forget our sense of fun.

Let’s pray for a pope who takes God and the church seriously—but not himself.

Show Comments (
3
)
Comments are automatically closed two weeks after an article's initial publication. See our comments policy for more.
Mister Heche
7 years 7 months ago
With all the attention focused on the upcoming papal conclave, I am once again reminded of the beauty, wonder, and importance of the Catholic Church. If you are a Catholic who has been away from the Church for a while, I can only say to you, "What are you waiting for? Come Home!" A moving, two-minute video on the beauty of Catholicism and the contributions of the Catholic Church to Western Civilization can be found at the link: http://allhands-ondeck.blogspot.com/2012/04/catholics-come-home.html
Valerie Cummings
7 years 7 months ago
And if such a one is elected, perhaps he can be known as Pope Hilarius II ! (Hilarus, Saint, POPE, elected 461)
krkr games
4 years 7 months ago
there are many useful and interesting article .العاب250العاب جديدةالعاب سياراتالعاب تلبيس بناتالعاب طبخ

This article also appeared in print, under the headline “Habemus Humor?,” in the March 18, 2013, issue.

James Martin, S.J., editor at large of America, is the author of the e-book Together on Retreat: Meeting Jesus in Prayer (HarperOne).