I can't help it, I love Lent 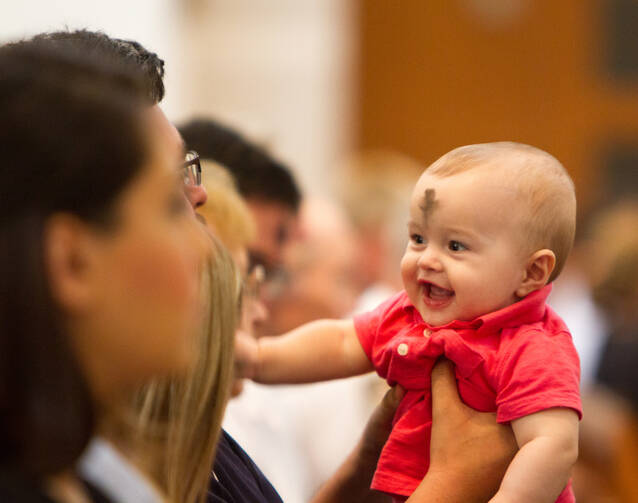 When the first real snow of our deep-freeze winter began to fall, I ordered everyone out for a walk. The boys were quickly booted and mittened, and my husband, who humors me because he is convinced I am mad, reluctantly joined us. The snow sparkled under the streetlights, the baby on the sled laughed at Horsey Mommy, and his older brother threw snowballs at anything vertical. "It is beautiful, isn't it?" I remarked, "I just love winter." The man of my dreams, who grew up in Buffalo, went to school in not-exactly-tropical Boston and, when we married, took me off to live in Alaska, countered with the fact that it was cold and wet. He then muttered new doubts as to my sanity and my slide toward masochism. Over cups of hot chocolate I renewed my praise of winter and made my Grand Confession: The only time of year I love more than winter is Lent. Eleven-year-old John came out with some quite creative sounds of disgust, as his father openly questioned the advisability of my remaining much longer without a keeper.

I have always loved Lent, although for reasons often only remotely connected with the real purpose of Lent.

But it is true. I love Lent. I have always loved Lent, although for reasons often only remotely connected with the real purpose of Lent. Take the diet of my childhood Lents, for example: Who can complain about abstinence when it means potato pancakes, macaroni and cheese with huge chunks of melting Cheddar (not that boxed stuff my own kids adore) and, wonder of wonders, my Czech grandmothers pirohy swimming in onions and butter. The "giving up" of Lent also offered great boosts to a child's self-esteem. I felt so noble about giving up penny fireballs that to this day I cannot eat them in Lent. And in those pre-ecumenical days, doing without candy or movies for 40 whole days made it quite obvious to us that we must be just a little bit better than everyone else, a point we were always quick to make known.

We lived in the church during Lent. I grew up in a family of Czech coal miners who still live, five generations of them, in the same small town and no doubt regard Vatican II with mixed feelings. In addition to the Sunday afternoon devotions, with the homily in Slavic, there were Wednesday night stations and Friday night benediction, with another Slavic homily, to round out a proper Lenten week. And confession every Saturday, of course, following my mothers dictum that if we should happen to die during the week we would still have made our Easter duty.

I probably should have developed a healthy hatred for Lent, maybe for religion in general, but somewhere beneath all the ritualized, too often trivial, practices of my childhood Lent, there was the feeling that this day for which we were preparing was of great importance. And there also lurked an almost tangible sense of a soon-to-be-realized hope, which I think forms the basis of my love for Lent. The anticipation of Advent is for a gift, the birth of the Child. In Lent the anticipation is for the Resurrection of this Child as the Messiah, requiring of us not merely an acceptance of Gods gift but a response of faith and commitment, which in turn holds out to us that for which we never cease to yearn-hope.

Lent never fails to offer us a second, or hundredth, chance.

Lent never fails to offer us a second, or hundredth, chance. In the clutter of daily living, in the distractions and frustrations of the average life, how is it possible to make a careful appraisal of just where I am in relation to where I wish to be going, and what is impeding my way? The whole idea of Lent, the emphasis on the journey of Jesus toward His ultimate destiny, broadsides me with the necessity of taking careful stock of my own destiny and how I am moving ever closer, I hope, toward it. Lent provides me with 40 days in which to do this, long enough for the practice to become a habit, an engrained part of my life.

Lent means spring and laundering everything in the house, leaving it to hang for hours in the sun and wind and basking in the freshness of it all. My soul has constant need of this same spring cleaning, this clearing out of the dull and musty that I may more fully grasp the newness and freshness of the New Life promised me by Christ. My spirit seems at times as muffled in protective layers as is my body in the winter. What does this say about the possibility of openness, to God and my neighbor, about my acceptance of Gods love for me, and my response to His grace? What a terrible fate, to wear galoshes on my soul!

Father James Martin on what makes a good Lent. Also, our pilot.
Jesuitical

In the end, whats not to love about Lent? The penance I take upon myself is no longer giving up fireballs, but something as simple as striving for more patience with the children or as difficult as coping with the fact that middle age has crept up on me when I wasn't looking. Nonetheless, Lent is hope, it is renascence, it is promise. And I love it.

Jane L. Wiesman is a correspondent for the Patriot-News of Harrisburg, Pa.

Show Comments (
1
)
Comments are automatically closed two weeks after an article's initial publication. See our comments policy for more.
14 years 10 months ago
How wonderful for me to see in print three words I have often uttered, to the dismay of those present, "I love Lent." For me too, there remains the nostalgia factor: mite boxes, no meat, fasting, Confessions on Saturdays (with tissue and bobby pin on head b/c I could never find my white veil), and in sixth grade, 8AM mass daily with my three best friends! Somewhere along the line, probably during my Mary Louis Academy (high school) days, I began to consider Lent, "the springtime of the soul." It remains my favorite season on so many levels.