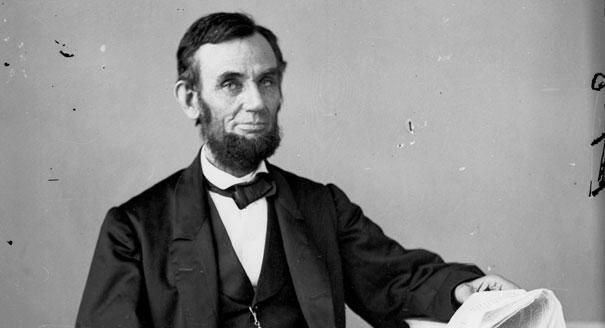 Former Governor of Utah and Ambassador to China, Jon Huntsman, announced his candidacy for president using the same backdrop that Ronald Reagan once chose, New York’s Statue of Liberty. Michelle Bachmann emphasized her roots in the hometown of her childhood, Waterloo, Iowa, proving yet again why she is the candidate to beat. Iowa! What an excellent place for a presidential candidate to grow up.

As Illinois Republicans prepared to gather for the state nominating convention, one of Lincoln’s staunchest supporters, Judge Richard Oglesby, was talking with one of Lincoln’s country cousins, a grizzled pioneer farmer named John Hanks. Hanks happened to mention that some thirty years earlier, he and Cousin Abe had split fence rails together when they were clearly some land about twelve miles west of Decatur.

Oglesby had found his presidential image.

On May 9, delegates gathered in the convention hall: an enormous tent, or “wigwam,” erected for the occasion. Just before the first formal ballot, Oglesby arose and announced that a certain person wanted “to make a contribution to the Convention.” This was Hanks cue. He and another man came marching up the center aisle carrying the two old rails, which were freshly festooned in red, white, and blue streamers and large banners reading:

Abe Lincoln, whose father was the first pioneer of Macon County (34-35).

A local paper found the effect “electrical,” but, according to Adam Goodheart in his 1861: The Civil War Awakening, it didn’t play that way in cultured and already-turning-blue Boston. Prominent abolitionists like William Lloyd Garrison and New England anti-slave orator Wendell Phillips,

reacted skeptically, at best, to the Republicans’ presidential nominee in 1860. To Garrison and Phillips, the unknown Midwesterner (born in Kentucky to Virginia parents, they must have noted with alarm) was simply one more mediocre politician to warm the presidential chair for another four years, while the nation drifted closer and closer toward despotism. Lincoln would “do nothing to offend the South,” Garrison predicted after hearing of the nomination. But Phillip’s outrage truly boiled over. Addressing an antislavery meeting just after the Republicans announced their nominee, he sneered: “Who is this huckster in politics? Who is this country court advocate?...What is his recommendation? It is that nobody knows anything good or bad of him. His recommendation is that out of the unknown things in his past life, journals may make for him what character they please. His recommendation is that his past is blank" (43).

Americans may prefer the origins of their presidents to be humble, but clearly not too humble. After all, the word comes from the Latin for dirt, humus. How high can one go when starting that low? American Catholics might be just as disappointed, on a holiday weekend in which we like to parade American exceptionalism, to be confronted with scriptural passages extolling humility. “See, your king shall come to you; a just savior is he, meek, and riding on an ass, on a colt, the foal of an ass” (Zech 9:9). A Fox News Celebrity might quickly want to caution that, while humility might be well and good for saviors, one can’t build great nations out of such timber. No?

In his Theology of the New Testament the great Protestant theologian Rudolph Bultmann wrote that “to deny God as creator is to turn away from Him to the creation. But the creation stands at man’s disposal; hence, to seek life in it means to have the presumption to seek life in the disposable, i.e. to presume to have one’s life at one’s own disposal. Hence, the ultimate sin reveals itself to be the false assumption of receiving life not as the gift of the Creator but procuring it by one’s own power, of living from self rather than from God” (I.232). Humility, in contrast, recognizes that everything we accomplish, or possess, in life comes to us as the gift of God.

That’s why humility becomes the very path to heaven, because only the humble can walk having laid down the burden of self, and what is heavier than the self? “Come to me, all you who labor and are burdened, and I will give you rest. Take my yoke upon you and learn from me, for I am meek and humble of heart; and you will find rest for yourselves” (Mt 11:28).

It wasn’t only Abolitionists in Boston who were disappointed in the candidacy of Abraham Lincoln. Plenty of Democrats in New York were asking, if the Republicans can stoop this low, what’s next? “Democrats paraded through the streets of Manhattan with banners reading, ‘No Negro Equality.’ One showed a crudely caricatured black man embracing a white girl. Another banner bore a cartoon of an African-American above the words, ‘The successor of Abraham Lincoln in 1864’” (45).

Of course, 1864 proved wildly pessimistic—or optimistic, depending upon one’s squint—but the Gospel was proved right in this regard, “although you have hidden these things from the wise and the learned you have revealed them to little ones” (Mt 11: 25).