Creature Discomforts: Journeys of hurt and healing on Broadway 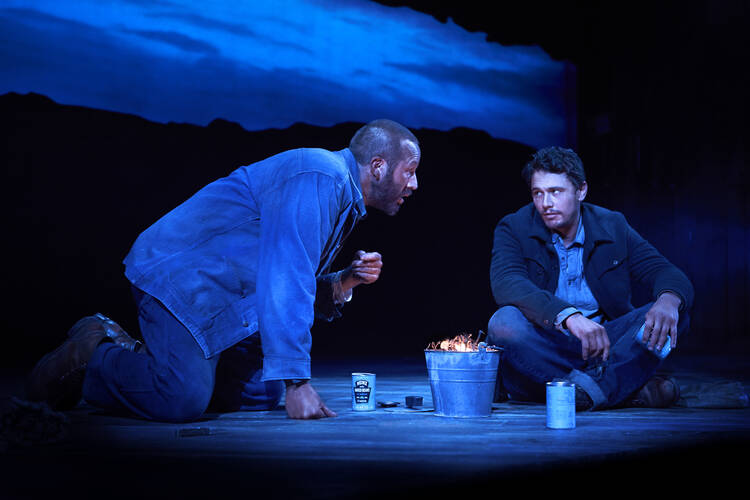 When a playwright puts a character with a prominent disability or a disfiguration at the center of his or her work, it can seem like a craven shortcut to an audience’s empathy, not to mention a sure magnet for actors hoping to add an award statuette to the mantle. Of course, a serious play—even if it is a comedy—is up to more than simply tickling our tear ducts and making us think, “What a great performance.” By placing characters with afflictions or impairments in the fore, authors and actors inevitably raise the moral stakes of their endeavor, since to depict such challenges is to reflect on the nature of the world and of creation. It gives the question of suffering, of theodicy, an irreducibly human form: What kind of creator makes flawed creatures? How do we relate to each other, all of us flawed? Might outward imperfection point the way to inner truth?

The answers, as provided in a pair of stellar play revivals on Broadway, are not pretty, though both productions are things of beauty in their own right. In John Steinbeck’s 1937 classic Of Mice and Men, the world of migrant farm workers in central California is a place of punishing, almost atavistic scarcity and severity. It is not only the Depression-era economics that give the work its potent fatalism; in this milieu of solitary, mutually mistrustful men, every shred of hope and human feeling is either snuffed out mercilessly or channeled into merciful killing. The show’s only loving relationship, between itinerant laborers George (James Franco) and Lennie (Chris O’Dowd), doesn’t stand a chance in this unforgiving sphere, not least because Lennie—a brutishly strong man-child with an unnamed type of intellectual disability—can’t help but cause harm. He not only lashes back, if reluctantly, when attacked; in Steinbeck’s cruelest irony, even Lennie’s embrace of the things he loves is deadly.

In the face of that bleak vision, director Anna D. Shapiro’s riveting production teases out the work’s humanity and humor, which of course only serves to heighten its excruciating tension and tragedy. The corrugated-tin bunkhouse where the farm workers swap stories and plot getaways over cards is as close as the show gets to a welcoming hearth, and the exquisite ensemble actors create a glow of fellow feeling. It may not be enough to keep the howling winds of despair from the door, but it’s enough to draw us around its campfire warmth. In the iconic leading roles, the deceptively casual Franco and the soulful but meticulous O’Dowd have the unmistakable chemistry of hard-knocks comradeship; the smiling tenderness between them feels no less genuine for being forged under such crushing conditions.

An irrepressible sweetness is also the saving grace, and quite possibly the Achilles heel, of The Cripple of Inishmaan, Martin McDonagh’s 1996 comedy, being given a belated and crowd-pleasing Broadway debut by the British director Michael Grandage. In the title role of Billy Claven—a well-meaning errand boy in 1930s Ireland who has, in the playwright’s simple, non-medical diagnosis, “one leg and one arm crippled”—Daniel Radcliffe gives an endearing, slightly effortful performance, as if he’s working to convince us of Billy’s infirmity.

Luckily, this eagerness on the part of the actor dovetails nicely with Billy’s own chipper determination against the steep odds of his poor and misunderstood existence in a seaside village, where he has the unappetizing choices of condescension from two adoptive spinster aunts, open mockery from a pair of teenage frenemies or gossiping interference by the town’s official busybody, Johnnypateenmike. It’s no wonder then that Billy spies an escape hatch when an American film crew descends on a nearby village to make a documentary. “Ireland mustn’t be such a bad place, if the Yanks want to come here to do their filming,” says Johnny, in a recurring, look-on-the-bright-side joke that neatly sums up the play’s sourly satirical view of Irish self-loathing and passivity.

It’s been much noted that this biting irreverence for the Emerald Isle—and in particular for the potato-parade tropes of Irish playwrights like Sean O’Casey and J. M. Synge—likely comes from McDonagh’s upbringing in London, with frequent visits to, but crucial distance from, his parents’ Irish home. And in the exuberant gallows humor of plays like “The Beauty of Leenane” and “The Lieutenant of Inishmore,” you get the sense of a young punk literally slaying those ancestral demons, exploding blarney into rubble.

“The Cripple of Inishmaan” is a more accessible, ostensibly more mature, less angry play; whereas elsewhere McDonagh’s characters were comically distorted by ignorance or hatred, putting a boy with congenital disabilities at the center of “Inishmaan” seems to have forced McDonagh to reckon with the possibility that human suffering may be a larger and less comprehensible thing than could be explained by mere stupidity or venality.

But McDonagh’s play never really rises to the occasion invited by Billy’s condition, instead mining it for straight-up pathos and laughs. The new Broadway production wisely plays to those strengths. Grandage has given the play the brash bounce of a boulevard comedy; if it edges toward the cartoonish, that seems to be the ideal way to put across the play: as a kind of Gaelic sitcom-fable, to be quaffed like a pint and forgotten in the morning.

Elsewhere on Broadway, two musicals deserve a mention in this space, since both represent resoundingly moving journeys from hurt to healing. In Hedwig and the Angry Inch—like “Inishmaan,” a late-90s phenomenon just now getting its Broadway debut—a transgender chanteuse, memorably embodied by sitcom star/awards-show maven Neil Patrick Harris, takes us from humble beginnings in East Germany to a humbling fringe career in middle America, and then beyond, to a glam-rock walpurgisnacht that, improbably, acquires the shape of a passion play, complete with a resurrection.

Best of all is Violet, yet another 90s-era piece just now finding its way to Broadway. This gorgeous, country-inflected chamber musical by composer Jeanine Tesori and librettist/lyricist Brian Crawley, based on Doris Betts’s short story “The Ugliest Pilgrim,” is as strange and unconventionally beautiful as its title character, a North Carolina farm girl whose father accidentally wounded her face with an axe. With the aid of judicious flashbacks, the show follows the adult Violet’s bus trip to seek a holy makeover from a faith healer in Memphis—a quixotic mission as doomed to disappointment as it is meant to signify a deeper search for meaning and repair.

It’s a remarkably affecting show, with many sharp and surprising turns, and it doesn’t hurt that it has two of the best performances of the season: from Joshua Henry, as a rueful but tenderhearted soldier Violet meets on her travels, and from the flinty, supple and achingly transparent Sutton Foster, in the title role. As Violet reaches the last turn of her journey, she is surprised by a beauty no scar could ever take from her, but that would never have shown itself without first having been hidden. “If I show you my darkness/ Will you bring me to light?” she sings, backed by a gleaming chorus that is her answer. She is no longer disfigured by suffering but transfigured by it.