When Ted Kennedy went all the way to the convention 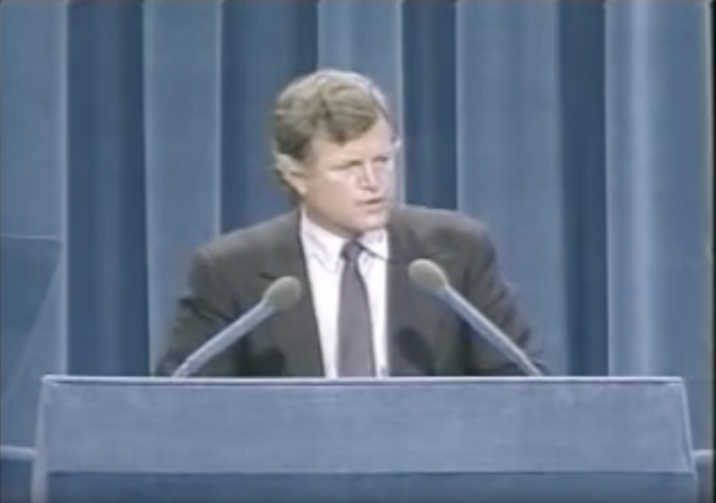 The headline is from The New York Times on June 4, 1980: “LAST PRIMARIES HELD—Senator Vows to Battle On Until the Convention.” The senator was Edward Kennedy, not ready to give up his campaign to deny President Jimmy Carter renomination by the Democratic Party, even though Carter had beaten him by almost three million votes in the primaries held that spring.

Kennedy was denying reality. President Carter already had 1,643 pledged delegates before any were awarded from the last day of primaries, and he needed only 1,666 to claim the nomination. A total of 696 were chosen in eight states on the first day of June, and Kennedy needed more than 96 percent of them to stop Carter. (That became impossible when Carter decisively won the Ohio primary while the votes were still being counted in California, where Kennedy won.) Unpledged superdelegates did not yet exist, so Kennedy’s only hope was to persuade hundreds of delegates to abandon Carter and vote for a rules change that would have freed them from any obligation to support the candidate who had won their states and districts.

“Tonight is the first night of the rest of the campaign,” Kennedy told his supporters on the night Carter secured a majority of convention delegates. “The people have decided that this campaign must go on.”

The senator from Massachusetts wasn’t bluffing. He did continue campaigning through the convention and unsuccessfully tried to change the rules so that delegates could vote their “conscience” (as his supporters would put it). After Carter won the nomination on the first ballot, Kennedy apparently sulked, and he conspicuously avoided shaking hands with the president on the podium after the latter’s acceptance speech.

Kennedy also delivered one of the most famous convention speeches in history that week, the “Dream Shall Never Die” address that became a blueprint for modern liberalism and the pursuit of “a fair prosperity and a just society.” [Corrected from “a fair prosperity and just society.”] Many Carter supporters blamed Kennedy for splitting the Democratic Party and handing the general election to Ronald Reagan, but it seems more likely that Carter’s 1976 victory was a Watergate-prompted aberration in an era of Republican dominance in presidential politics. Kennedy survived any “spoiler” label and was one of the most beloved leaders in the Democratic Party when he died in 2009.

Does Bernie Sanders fancy himself a successor to Ted Kennedy? He is now promising to fight all the way to the Democratic Convention in July, though we won’t know until Wednesday whether he means it or is just rousing his supporters for the final big primaries. He’s done better than Kennedy did in 1980 (42 percent of the primary vote so far, to Kennedy’s 38 percent), but he’s probably got an even more uphill fight against Hillary Clinton, thanks to her lead among some 500 superdelegates—elected officeholders who can vote as they please. Unlike Kennedy in 1980, Sanders does not have decades of service to the Democratic Party or close ties to major constituencies in the party such as labor unions and civil rights groups. Patience in Washington with his campaign grew thin a long time ago. On the eve of the California primary, the Wall Street Journal reported on this irritation, saying, “Democratic officials, fund-raisers and operatives are getting impatient, calling on Mr. Sanders to quit the race and begin the work of unifying the party for the showdown with the Republican presumptive nominee.”

WSJ reporter Peter Nicholas adds this quote: “I would hope people would understand what a Trump presidency would mean and act accordingly—and ‘accordingly’ means quickly.” Given Mr. Sanders’s charge that Ms. Clinton is too close to Wall Street, was Mr. Nichols being puckish in his choice of whom to quote—“Orin Kramer, a New York hedge-fund manager who has raised campaign funds for both President Barack Obama and Mrs. Clinton”?

In the event that Mr. Sanders does not bow to mathematics and suspend his presidential campaign before the convention, Democratic leaders will be asking with exasperation, “What does Bernie want?” Perhaps he just wants a shot at YouTube immortality with an old-fashioned stem-winder of a speech. (“The Dream Shall Never Be Rigged”?) In any case, Ms. Clinton would be wise to insist: No handshake for me means no speech for you.

Robert David Sullivan
RobertDSullivan
Show Comments (
2
)
Comments are automatically closed two weeks after an article's initial publication. See our comments policy for more.
Vince Killoran
6 years 8 months ago
Bernie may not have the support of establishment liberals but he has deep and wide support across the country. Take labor unions as an example: the international officials back HRC but the local unions and rank-and-file activists--those close to the hardscrabble world of today's workers--are in Bernie's camp. So, yes, go Bernie needs to go all the way to the convention. HRC will dare not deny him a prime time speaking slot. His campaign will do little to move HRC from her big money, neoliberalism. It will help carry on his campaign message to t.v. viewers. activists, and those young progressives running for office.
Robert Lewis
6 years 8 months ago
I am not, myself, one of Sanders' "young activists," but I will use directions from him about every other vote I cast this season, and I will NOT vote for someone just because Madame Clinton approves of him or her. However, I WILL be holding my nose and voting for her.