Speakers at G.O.P. convention appeal to those who see America in decline 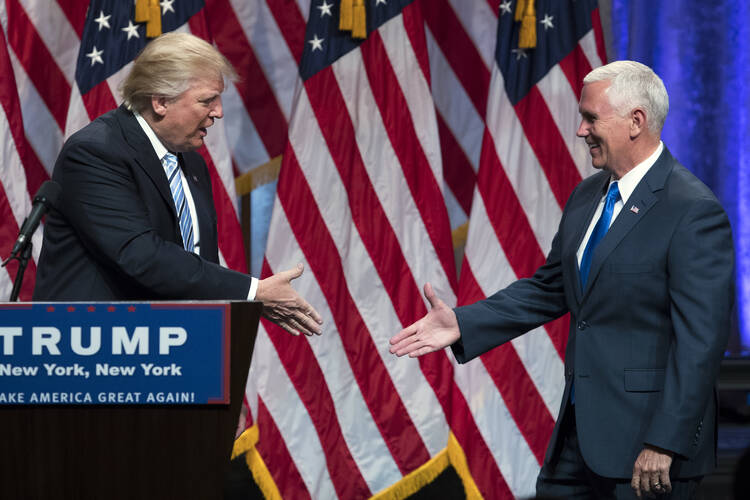 This year’s political conventions will probably get big audiences, but how many will be hate-watching them? In Cleveland, the Republicans are expected to nominate Donald J. Trump, who makes most elected officials in his own party cringe with embarrassment and fear of defeat. The following week in Philadelphia, the Democrats will nominate Hillary Clinton, respected by almost every leader in her party but massively unpopular among independent voters. Each convention is likely to have its own tone-deafness, akin to outdoor music festivals that inadvertently irritate all who accidently pass by.

The list of expected speakers at the Republican convention is heavy with Trump family members and people who have never been elected to office (such as Ultimate Fighting Championship head Dana White and soap-opera actor Antonio Sabato Jr.), along with former presidential candidates who lean toward the hell-in-a-handbasket interpretation of contemporary American society (Mike Huckabee and Rudy Giuliani rather than somewhat sunnier pols like Jeb Bush and John Kasich, both of whom have decided to stay outside the convention hall).

On Friday, TV star Scott Baio announced that he had been asked to speak at the opening night of the convention. (The official list of speakers was finally announced late Sunday afternoon. The Washington Post had dryly reported that morning, “Unlike in previous years, this year’s convention schedule has been a work in progress, even as delegates started arriving. Other than the fact that the convention will start on Monday and close on Thursday, few details have been released.”) The 55-year-old Mr. Baio got his start on Happy Days, a sitcom that aired in the ’70s but was set in the ’50s, and his tweets in support of Mr. Trump have included comments such as “This is NOT the country I grew up in anymore.” This seems to make Mr. Baio a good fit for a Trump-dominated convention: A Pew Research Center poll conducted in March found that 75 percent of Trump supporters agreed with the statement “Compared with 50 years ago, life for people like you in America is worse.” (Forty-six percent of all voters, and only 22 percent of those supporting Hillary Clinton, agreed.)

Laura Ingraham—the radio talk-show host who will be speaking at the convention on Wednesday evening—told The New York Times that Mr. Trump is reshaping the Republican Party as a home for “working-class nationalists” who reject the pro-immigration and free-trade policies of previous Republican presidents. Voters who do not share nostalgia for the Happy Days era may see “nationalist” as a euphemism for non-Hispanic white Americans, and perhaps only straight Christian whites. One of the biggest questions of this week is whether Mr. Trump, someone who had a decidedly secular and cosmopolitan image before running for president, will make any effort to broaden the party’s appeal. The alternative would be to emulate Pat Buchanan’s “cultural war” speech from the 1992 Republican Convention, which was seen as a factor in George H. W. Bush’s defeat that year but has since become a template for driving up enthusiasm, and voter turnout, among the G.O.P. base.

Mr. Trump may have no alternative than to double down on the “nationalist” rhetoric, given his poor favorability ratings among young and nonwhite voters. Any hope that he would use the Republican convention to reinvent himself as a more conciliatory, thoughtful statesman largely evaporated last week. One reason was his continued habit of reacting to major events with either inflammatory rhetoric (his demands for “law and order” and baseless accusations that “some people” have called for a “moment of silence” for the gunman who killed five Dallas police officers) or banal comments that betray a lack of interest in any issue of complexity (“hopefully it will all work out,” in response to the attempted coup in Turkey).

Saturday’s announcement of Gov. Mike Pence of Indiana—who was raised as a Catholic and has clashed with Catholic Charities of Indianapolis over the settlement of Syrian refugees—as Mr. Trump’s running mate was no more reassuring. As The New York Times reported: “His introduction of [Mr. Pence] was a remarkable reminder that ultimately, the Trump campaign is about one person…. Mr. Trump stood there alone and talked for 28 minutes, delivering a long and improvised riff that emulated his rallies instead of a traditional vice-presidential debut.”

Vox’s Ezra Klein was more blunt, saying of the Pence introduction: “Forget the political mainstream. What happened today sat outside the mainstream for normal human behavior.” He added: “I know many who want to support Donald Trump… [hoping] that he will prove himself equal to the responsibilities he seeks to absorb. But he’s been given that opportunity again and again, and he keeps failing it.”

Mr. Trump’s gracelessness in adding Mr. Pence to the ticket—“he looks good” was about the most heartfelt thing he said about his pick for vice president—is an inauspicious lead-in to the convention, where the first couple of nights are supposed to be about building enthusiasm for the party’s nominee. Will Mr. Baio and company make an argument for a Trump presidency that will appeal to anyone not already on board with the idea?

Outside of Mr. Trump himself, the most anticipated speech of the convention may be from House Speaker Paul Ryan, who was publicly hesitant to endorse Mr. Trump but will speak on Tuesday about “the need for conservatives to unite around Republican candidates in advance of a critical election.” At times over the past year, Mr. Ryan has seemed the antithesis of Mr. Trump, telling a group of House interns in March that political opponents should treat each other with respect and apologizing for his past labeling of welfare recipients as “takers.” (See “Ryan Issues Challenge to New Generation.”) Mr. Ryan has also been identified with Republican efforts to address poverty in the United States (see “Preferential Options”) with the kind of policy specifics not associated with Mr. Trump.

Still, if it’s up to Mr. Ryan to rehabilitate Mr. Trump’s image and assure voters outside the convention hall that the Republicans are not merely a “nationalist” (i.e., white) party he may have gotten off to a rocky start. On Saturday, the speaker posted on Instagram what he called “a record for the most number of #CapitolHill interns in a single selfie”—and commenters immediately noticed the lack of racial diversity in the photo.

Robert David Sullivan
RobertDSullivan
Show Comments (
6
)
Comments are automatically closed two weeks after an article's initial publication. See our comments policy for more.
William Rydberg
6 years 2 months ago
Would'nt it make sense for. I mean America to declare itself for its political party? There are only 2 ?
JR Cosgrove
6 years 2 months ago
They have at least a thousand times. It is hard to miss. It is also illegal for them to do so.
William Rydberg
6 years 2 months ago
Surely it's not go to jail illegal? Why not pay the just administrative taxes and have a clean conscience. Naturally, they will need to consult with the New York Provincial...
ed gleason
6 years 2 months ago
NYT today has an article on the ghostwriter who regrets writing the Art of the Deal. His comment that it should have had the title The Sociopath, .tells the whole story. That this sociopath Trump has gained a foothold on the way to the presidency and has supporters below threatening the America mag's existence tells the rest of the story. Cable TV is telling us that Trump will speak every night of the convention.. That almost all GOP establishment is skipping this convention except for the greedy job seekers like Christie, Gingrich, Huckabee and Guliani should give the Trump supporters at least a clue. {all of them and Trump are draft dodgers]
Joseph Manta
6 years 2 months ago
Is this an anti-Trump election piece? Reads like one.Guess who this leftist is supporting in the election. Planned Parenthood Hilliary.
JR Cosgrove
6 years 2 months ago
How did Trump happen? That was the question everyone has been trying to answer since late last year. I am not sure anyone yet knows. But two people helped a bunch, Matt Drudge and Rush Limbaugh. Limbaugh tried to pull back once it became clear Trump was not a conservative but was powerless to do anything to stop him. Drudge doubled down and is considered the main reason for Trump's success. Here is a story about it. http://read.bi/29RL9qD Now the question is will Trump be the face of the Republican Party in the future. After all he is really a liberal Democrat who took over the party. If he loses, especially big, then there will be a disarray for awhile and the conservatives will be back. If he wins, it will be interesting to see where the Republicans will go.