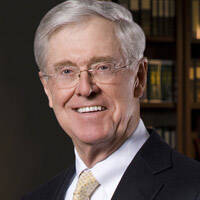 This week, the Supreme Court weakened limits on campaign contributions, and mega campaign contributor Charles G. Koch wrote a Wall Street Journal column about all the hurt he’s suffered as a fighter for “free society.”

Koch accuses his critics of “character assassination.” The charitable view is that Koch used hyperbole to get attention, since no one with the slightest knowledge of American politics would use this phrase to describe what the Koch brothers have endured. (Charles does not mention David, who has also contributed millions to political organizations, even though critics almost always speak of them together. No need to bring up family ties in a column ridiculing fears of concentrated wealth.)

Character assassination. The phrase makes me think of the planted rumors about Michael Dukakis being mentally ill, or John McCain having an illegitimate child. I think of the “swiftboating” of John Kerry, the snickering about George W. Bush’s self-disclosed history of alcoholism, and the snide comments about Mitt Romney being a Mormon. Most of all, I think of the attacks on the current president that go far beyond philosophical disagreements. Have the Koch brothers (whose fortune is based on oil refineries and such consumer products as Brawny paper towels and Dixie cups) had to deal with anything like these examples?

This is how Charles Koch defines character assassination: “Rather than try to understand my vision for a free society or accurately report the facts about Koch Industries, our critics would have you believe we’re ‘un-American’ and trying to ‘rig the system,’ that we’re against ‘environmental protection’ or eager to ‘end workplace safety standards.’”

So, it’s character assassination to define “environmental protection” more stringently than the Koch brothers do. Charles rebuts his critics by citing “well over 700 awards for environmental, health and safety excellence” awarded to Koch companies, as if they’re proof of a failure to rig the system.

Coincidentally, the Koch brothers appear in this week’s issue of The New Yorker, which went to press before the Supreme Court decision and the WSJ column. “A Chemical Spill in West Virginia” (subscription required), by Evan Osnos, explores the coal industry’s clout in that state’s government. Charles and David Koch have given millions to universities and libertarian think tanks in West Virginia, and they are ramping up political spending to help ensure the election of anti-regulatory lawmakers:

In February, Americans for Prosperity, the political-advocacy group funded heavily by the Koch brothers, established a chapter in West Virginia. A state Republican consultant told me, “You can do things here incredibly, incredibly cheaply. For instance, A.F.P., the Koch brothers, went and did North Carolina last time. Well, a legislative seat here is about one-fourth the size of a legislative seat in North Carolina. So there’s bang for your buck.” In any given district, he said, “You can go in for twenty grand, and probably fix a problem.” He also noted, “People are just showing up with pockets full of money, saying, ‘We want to help you out.’ ”

Not that West Virginia was a model of transparency in politics before the Koch brothers got there. Osnos recalls a watershed moment in Big Coal’s takeover of state politics:

Don Blankenship, the chairman of Massey Energy, which was America’s fourth-largest coal company, sought to reshape the politics of the West Virginia Supreme Court shortly before it took up Massey’s appeal of a fifty-million-dollar judgment for fraud and interfering with a contract. Blankenship had broken the mine workers’ union during a strike in 1985 and still kept, near his desk, a television that had been shattered by a bullet that came through his office window. Judges in West Virginia are elected, not appointed, and in 2004 Blankenship spent more than three million dollars to promote a conservative candidate named Brent Benjamin, who was vying to be the first Republican on the Supreme Court in seventy-six years. Most of the money went to a political-action committee that was running ads accusing Justice Warren McGraw, a progressive, of being soft on child molestation and drugs. Blankenship’s candidate won, and provided the decisive vote that overturned the judgment against Blankenship’s company.

McGraw was called “too dangerous for our kids” in one commercial funded by the political action committee For the Sake of Our Kids (principally funded by Blankenship). This seems more like character assassination than what Charles Koch is going through. But Koch doesn’t argue for more civil political campaigns in his Wall Street Journal column, for that would imply that his ideological foes are also worthy of respect. Instead, he warns of “collectivists” who “strive to discredit and intimidate opponents.”

Slate’s Dave Weigel, who does not seem to be a fan of limits on campaign spending, has trouble with Koch’s sob story:

The Charles Koch standard is problematic if you think (like I think) that campaign donations should be uncapped but totally disclosed. […] Donors have a First Amendment right to give money, but their opponents flout that right when they criticize them. Why? That's an excellent question.

On the same week that Charles Koch whined about character assassination but gave no evidence of having been harmed by it, a tech executive lost his job because he donated $1,000 donation to an organization fighting same-sex marriage in California six years ago. Less than two weeks after being named CEO of Mozilla (developer of the Firefox web browser), Brendan Eich resigned, giving in to pressure from displeased board members, employees, and customers. Several reports attributed his swift departure in part to a “boycott” of Firefox by the dating website OKCupid. (It did not actually block Firefox users, but merely required them to click through a shaming message urging them to use another browser.)

We didn’t act like you’d expect Mozilla to act. We didn’t move fast enough to engage with people once the controversy started. We’re sorry. We must do better.

Brendan Eich has chosen to step down from his role as CEO. He’s made this decision for Mozilla and our community.

Mozilla believes both in equality and freedom of speech. Equality is necessary for meaningful speech. And you need free speech to fight for equality. Figuring out how to stand for both at the same time can be hard.

Free speech was clearly the loser this time, but Mozilla seems resigned to the outcome. Andrew Sullivan has a predictably heated response: “There is only one permissible opinion at Mozilla, and all dissidents must be purged! Yep, that’s left-liberal tolerance in a nut-shell.”

As a supporter of marriage equality, I have some admiration for the lightning tactics used against Mozilla. What we have here is hardball politics as practiced by the National Rifle Association (and, yes, by the Koch brothers). The campaign against Brendan Eich is similar to the NRA’s battle against President Obama’s nominee as surgeon general, Vivek Murthy, for the sin of tweeting in favor of gun control after the massacre at an elementary school in Newtown, Connecticut. The strategy is the same: No compromise, no mercy.

But the Mozilla case does have troubling implications. Are supporters of marriage equality for gay and lesbian citizens now expected to boycott companies with executives who opposed same-sex marriage six years ago? Ten years ago? Should the same standards apply to executives who have contributed to legislators who voted for the death penalty?

The Koch brothers, I suspect, would agree that you take political victories wherever you can. And getting Mozilla to reverse itself was too easy to resist. As for a boycott of Koch products, don’t expect things to move as quickly.

Robert David Sullivan
RobertDSullivan
Show Comments (
1
)
Comments are automatically closed two weeks after an article's initial publication. See our comments policy for more.
ron chandonia
8 years 2 months ago
I'm curious why "a supporter of marriage equality" is given a venue in a Catholic magazine. Any other facets of Catholic teaching you'd care to trash while you're at it?