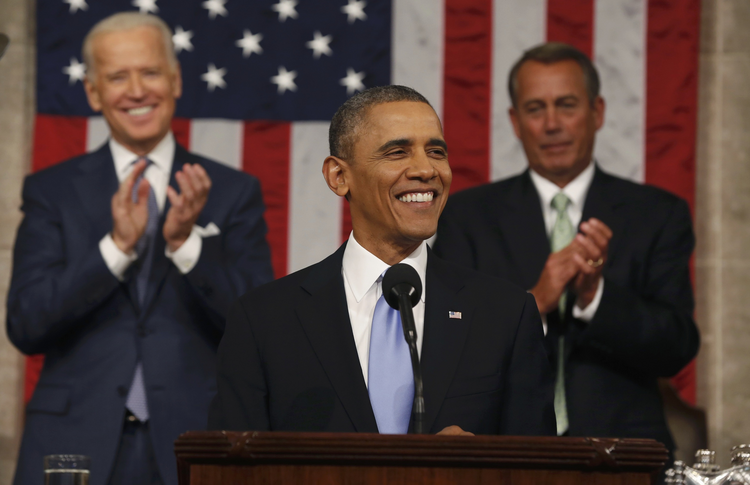 The National Journal’s Ron Fournier previews President Obama’s State of the Union speech by comparing him to Mitt Romney: “Both squandered their opportunities to transform the American political system—and now represent the utter phoniness of it.”

I don’t know of any household, let alone workplace, that has eradicated pettiness. Pettiness and intransigence complicate the task of taking out the garbage from a typical family’s kitchen—something needed to keep rats from invading—but Fournier expects a president to wipe them clean away. The president would need daily shows of force, akin to the Chinese army in Tiananmen Square, not to eliminate the pettiness in Washington, but to keep it simmering behind closed doors. And he’d still know better than to mess with farm subsidies.

The silliest line in Fournier’s piece comes at the end: “Americans crave authentic leadership—honest people who work together and change things for the better.” I have no idea what “authentic” leadership is—getting people to do what you want without giving them anything in return? If Fournier wants a stronger presidency, he should argue for greater constitutional powers, or for a parliamentary system in which it’s impossible for the presidency and Congress to be controlled by different parties. If he wants multiple points of leadership, that’s what we’ve got now.

Contrary to Fournier’s assertion, there has never been much evidence that Americans crave strong leadership, either in the form of a powerful president or in the form of brook-no-dissent congressional leaders. Writing at the Mischiefs of Faction blog, Julia Azari cites research based on public opinion surveys: “while citizens may prefer for the legislature to act in a bipartisan fashion, at least some people—stronger partisans—prefer for their own Congress member to stick to his or her guns. To partisans, bipartisanship means the other party compromises.”

It’s almost unheard-of for someone to win a congressional election by pledging to follow presidential leadership. Even if the president is from your own party, you must promise to be highly skeptical of any proposal from the White House. You must put the interests of your state or congressional district before the goals of the president. That is, you must keep pettiness alive if you want to remain popular at home.

Fournier wants to pretend that Americans are repelled by grandstanding in Washington. He’s flattering his readers and representing the utter phoniness of establishment punditry.

Pope Francis’s comments on climate change—“I don’t know if [human activity] is the only cause, but mostly, in great part, it is man who has slapped nature in the face”—are irking American economic conservatives, according to the AP.

The AP story quotes Steve Moore, chief economist of the free-market Heritage Foundation: “Pope Francis—and I say this as a Catholic—is a complete disaster when it comes to his public policy pronouncements…. The pope has allied himself with the far left and has embraced an ideology that would make people poorer and less free.”

Francis is not only getting under the skin of some who celebrate papal leadership on matters that do not affect bank accounts, he is again challenging the notion of American exceptionalism. The United States is historically the biggest source of greenhouse gas emissions (passed by much more populous China within the past decade), and the idea that America is primarily responsible for damaging the planet does not fit with the narrative of a country blessed by God to do…well, whatever it wants.

U.S. Rep. John Shimkus, the Republican chair of the House’s Subcommittee on Environment and the Economy, infamously suggested in 2010 that the U.S. has no business trying to stop climate change, and its accompanying rise in sea levels, because God will protect us. (“I do believe in the Bible as the final word of God,” Shimkus said. “And I do believe that God said the Earth would not be destroyed by a flood.”)

Pope Francis is challenging this abdication of responsibility, and he is refusing to lend credence to a science-vs.-faith framework that can serve as a rationalization to do nothing. That’s leadership.