Charitable giving is highest among the most religious 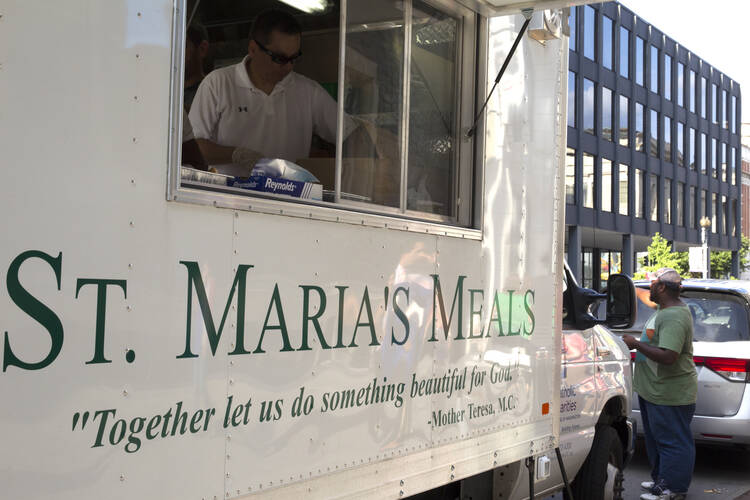 “It is not Americans in the high-income, urban, liberal states like Massachusetts or California who are our most generous citizens,” writes Karl Zinsmeister in the newly released Almanac of American Philanthropy. “Rather it is residents of middle-American, conservative, moderate-income, religiously active regions who step up the most.”

That’s the political headline of the 1,300-page volume, which can be bought in print or read online for free, but there’s a lot more here, including a history of giving in America (the “Philanthropy Hall of Fame” has biographies of St. Katherine Drexel and others), statistics on charitable donations and the mostly unsurprising results of a national poll (only 28 percent agree that “government needs to place stricter controls on charities donors, and foundations”).

The book is published by the Philanthropy Roundtable, a network of charitable donors “working to strengthen our free society, uphold donor intent, and protect the freedom to give,” and it has a strong libertarian lean. Mr. Zinsmeister served as chief domestic policy advisor to President George W. Bush; before that, he was editor of The American Enterprise, which was published by the conservative think tank AEI.

With this background, Mr. Zinsmeister may have taken a little pleasure at writing, “the states that rank highest in charitable giving all voted Republican in the 2012 Presidential election, while all but a couple of the least generous states voted for the Democrat.” Utah is the most generous, based on the latest self-reported data to the IRS, with 6.6 percent of all adjusted gross income going to charities, followed by Mississippi and Alabama. The least generous state by this measure is New Hampshire (1.7 percent to charity), followed by Maine and Vermont.

The high ranking of Bible Belt states is no accident, writes Mr. Zinsmeister: “Religious practice is the behavioral variable most consistently associated with generous giving. Charitable effort correlates strongly with the frequency with which a person attends religious services. Evangelical Protestants and Mormons in particular are strong givers.” Since 39 percent of all charitable donations go to religious organizations, more secular states would seem to be at a disadvantage in generosity rankings, but Mr. Zinsmeister writes that religious people are more likely to donate to charities of all kinds. He also writes, “married people give to charity at 1.6 times the rate of counterparts who are identical in every other way except that they are unmarried.”

Mr. Zinsmeister also finds more generous donors among Republicans (31 percent give more than $1,000 a year, compared with 17 percent of Democrats and 20 percent of independents), but Republicans are also concentrated at higher income levels. If you measure donations as a percentage of an individual’s income, the picture changes. Looking only at those who report donations, the average from households making less than $25,000 per year is $934, or 12 percent of total income. From households making more than $162,000 a year, the average is $5,805, or 2 percent of total income.

The Almanac also includes several essays on the role of philanthropy in American life and its effectiveness versus government programs. In “Fixing Problems Via Philanthropy Versus Government,” Mr. Zinsmeister argues that “government problem-solving” is “sluggish and uninspired,” but private spending “tends to adapt effectively to changing conditions on the ground.” (A generalization, to be sure, and he does not address the lightly regulated charities that divert almost all of their donations to cover “operating costs.”) He also praises the “individualized” nature of many charities such as Alcoholics Anonymous, writing that they “take advantage of all the useful information that becomes available when you actually know someone, instead of dealing with a stranger. And they use the power of relationships to help people change behavior.”

That explains “why many donors prefer to work in their own backyards,” but it also explains why government is compelled to step in when cities or entire regions suffer from poverty, poor schools, or a lack of health resources, and there is a shortage of neighborly philanthropists in those particular “backyards.” There is also the question of whether a citizen has a right to decent schools or health care, something the government can be held accountable for, rather than the hope for aid from charitable organizations that may impose religious, ethnic, or geographical tests on recipients.

Mr. Zinsmeister also includes an essay on “Common Criticisms of Philanthropy,” but only to reject them—for example, saying of the lack of coordination, “A riotous patchwork can be a think of great beauty.” True, but most people like to keep a set of bed sheets without holes to keep beneath our beautiful quilts.

Robert David Sullivan
RobertDSullivan
Show Comments (
5
)
Comments are automatically closed two weeks after an article's initial publication. See our comments policy for more.
L J
6 years 5 months ago
More "us" versus "them", Blue vs Red, Conservative vs Liberal, Democrat vs Republican Only in America has the Body of Jesus Christ become so divided into two categories Red vs Blue. Christ has a different perspective
William Rydberg
6 years 5 months ago
Actually, there is a clarication: Matt 6:3,4 - "But when you give alms, do not let your left hand know what your right hand is doing, so that your alms may be done in secret; and your Father who sees in secret will reward you."
Pual Mark
6 years 5 months ago
This is a very nice post which is about Blue States Get Dinged in Almanac of American Philanthropy. You are such an amazing person who wrote this type of posts.gymnastic mats uk at best price
steve larsc
5 years 1 month ago

Religious people do more in charitable works, as most of our religious books taught us about the importance charity and helping others. The fear towards God and their adamant belief in religion influence them participating more in Opti Lingo charity works.

It is always good that be kind ful to our society. We know that lots of charity works are done in our society and we must be taken part of it. It’s a good quality to engage in charity works and I really like this post very much.JoyJolt espresso cups