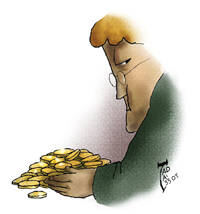 What can be done when one lives where the economic system is marked by deep inequity? One kind of response has been visible in recent weeks in the United States, as the protest movement Occupy Wall Street has voiced a broad-based frustration over how our financial system works. Today’s parable offers another image of how an individual can take measures to undermine a system that allows the rich to become richer while the poor become poorer.

The story involves a very rich man who entrusts his possessions to his servants before going away on a journey. One receives five talents, another two and the last one. A talent, talenton in Greek, is a monetary unit or a weight measurement. It is a very large sum of money. Unlike the master in Luke’s version of this parable, who instructs his slaves to invest the money, the master in Matthew presumes his servants know how to increase his holdings in his absence. While he is away, two of the servants invest and double the money. For this they earn the master’s praise and are given increased responsibilities. The third buries the money, which does not increase the yield but was a good way to safeguard money and possessions in antiquity (see the parable of the buried treasure in Mt 13:44). For this he receives harsh words and severe punishment.

An important key to understanding the parable is to keep in mind that Jesus did not live in a capitalist system in which it is thought that wealth can be increased by investment. Instead, people had a notion of limited good: there is only so much wealth, and any increase to one person takes away from another. A typical peasant would aim to have only enough to take care of his family. One who amassed large amounts for himself would be seen as greedy and wicked. In the parable, then, the third servant is the honorable one—only he has refused to cooperate in the system by which his master continues to accrue huge amounts of money while others go wanting.

The parable can be a warning about the ease with which people can be co-opted by an unjust system, while also giving encouragement to disciples to take courageous measures to expose unfettered greed for the sin that it is. The last verse is sobering, depicting what can happen to those who blow the whistle on the rich and powerful. The parable also encourages disciples to find ways to stand together as they confront unjust systems and not to be found in a vulnerable solitary position, as was the third servant.

Reading the parable from this perspective, one sees that the man going on a journey is not a figure for God, and the parable is not an exhortation for people to use their God-given talents to the full. While the latter is an important thing for Christians to do, it was not likely to be the way Jesus’ first hearers understood the parable, since talenton does not have this metaphorical connotation in Greek. Moreover, there is an eschatological dimension to the parable that such an interpretation misses.

In the literary context of Matthew’s Gospel, this is the third of three parables that stress the need for disciples to be faithful in the time between Jesus’ departure and his coming again. In contrast to slaves, who live in servile fear of a greedy master who metes out cruel punishment to those who will not go along with his program for self-aggrandizement, Jesus’ disciples live with trust in God, whose equitable love emboldens them to work for justice here and now while awaiting ultimate fulfillment.

This article also appeared in print, under the headline “Unmasking Greed,” in the November 7, 2011, issue.

Barbara E. Reid, O.P., a member of the Dominican Sisters of Grand Rapids, Mich., is a professor of New Testament studies at Catholic Theological Union in Chicago, Ill., where she is vice president and academic dean. Her latest book 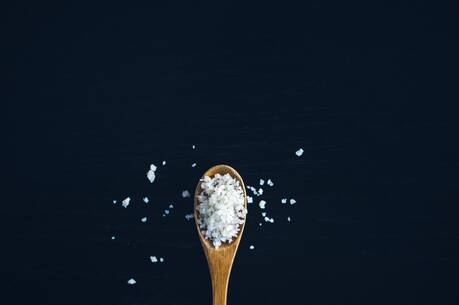