Toward a Sacred Unity 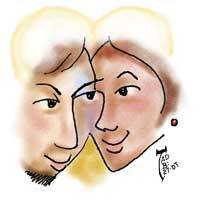 The divorce rate in the United States for the past decade has been approximately 50 percent for first marriages. The majority cite “irreconcilable differences” as the cause. Two-thirds of those who divorce have young children. While no statistics are available for first-century Palestine, divorce was not uncommon. But marriage practices and attitudes toward marriage were considerably different from our own. In their patriarchal social system, marriages were arranged between families to strengthen the social cohesion of the two clans. The terms were negotiated between the groom and his father and the father of the bride. Divorce would mean a messy separation of the two families and would bring shame on the family of the bride, since in Jewish tradition, only a man could initiate divorce.

It is in this context that the Pharisees “test” Jesus about the Law concerning divorce. The only text in the Torah that deals with divorce is Dt 24:1-4, where Moses declares that a man who becomes displeased with his wife because he finds in her “something objectionable” may write her a bill of divorce and hand it to her and dismiss her from his house. The meaning of theHebrew term used here had long been debated by the rabbis. In the time of Jesus, some important teachers, like Shammai, interpreted it strictly as meaning only sexual misconduct, whereas others, like Hillel, thought it allowed even for spoiling a dish. Jesus’ response is startling. He interprets Deuteronomy 24 as a concession on the part of Moses to the peoples’ hardness of heart and redirects them to the ideal put forth in Genesis 2. He underscores the divine intent for oneness and harmonious relations among all creatures, most especially human beings, male and female, created in God’s image and likeness.

The creation of woman in Gn 2:18–24 has often been misinterpreted in misogynistic ways: that the creation of woman as second, and from the man’s side, makes her subordinate to and derivative from him. And the Hebrew phrase in verse 18 has been poorly rendered in some translations as “helpmate,” making the sole purpose of woman’s creation to be an aid in man’s work. More recent translations have rightly rendered it as “suitable partner” (revised NAB) or “a helper as his partner” (NRSV). These capture the nuances of the Hebrew words for “strength, indispensable aid,” often used of God’s saving help, and for “corresponding to.” As a myth of origins, Genesis 2 tells of how human beings came to be and how male and female relate to one another with mutuality and partnership. Having been created from man’s rib (literally, “side”), woman is to stand alongside him as his equal. As the man’s exclamation in verse 22 affirms, she corresponds to him exactly. She is strong like him (“bone of my bones”) and weak like him (“flesh of my flesh”).

Jesus quotes this text to his opponents, changing the focus from divorce to God’s original intent for oneness and mutual correspondence. Just as later Christians would come to understand God as three in one, so the unity of man and woman in marriage reflects this sacred unbreakable oneness.

The reasons why not all marriages reflect this sacred unity are many; and from the very first, Christians have understood that there are exceptions to Jesus’ stark pronouncement of “no divorce” (see 1 Cor 7:11, 15; Mt 19:9). When the ideal cannot be realized, it is equally important to remember Jesus’ insistence on compassion, forgiveness and unconditional love.

This article also appeared in print, under the headline “Toward a Sacred Unity,” in the September 28, 2009, issue.

Barbara E. Reid, O.P., a member of the Dominican Sisters of Grand Rapids, Mich., is a professor of New Testament studies at Catholic Theological Union in Chicago, Ill., where she has been named vice president and academi