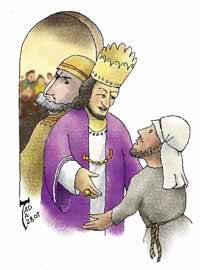 In biblical times when ancient Israelites tried to imagine what the fullness of God’s kingdom would be like, one of their favorite images was a banquet. Today’s passage from Isaiah 25 provides a good example. The prophet pictures God’s kingdom as a grand banquet with “a feast of rich food and choice wines.” In a society in which such food and drink were in short supply, the image was powerful. The one who supplies this extraordinary meal is “the Lord of hosts,” and it is open to “all peoples.” It takes place on “this mountain,” most likely the Temple Mount in Jerusalem, which itself was an image of God’s dwelling place. At this banquet God will destroy death, end all suffering and bring about salvation. At this banquet the hopes of God’s people will be fulfilled.

Psalm 23 (“The Lord is my shepherd”) is most famous for its pastoral imagery of God’s care for us, leading us through the dark and dangerous places in our lives. The second half of the psalm, however, shifts the imagery and portrays God as the host at a lavish banquet. In the ancient Near East the two images—shepherd and host—were often applied to kings. Psalm 23 uses them to describe God as the king of kings and lord of lords.

The third banquet image in this Sunday’s readings, the parable of the royal banquet in Matthew 22, develops the imagery further to make two important points about God’s kingdom. We have to accept the invitation to the banquet, and we have to behave in an appropriate manner when we are allowed in.

In Matthew’s version of the parable, the invitation is to a royal wedding feast for a king’s son. Most people invited to such a banquet would feel honored and make every effort to attend. What is peculiar in this case is that those initially invited (the “A list” guests) refuse to come. They do not even bother to give good excuses, and they proceed to abuse and mistreat those who were sent to deliver the invitation.

We know from the start that this parable concerns the kingdom of heaven. In what is a kind of allegory, the king is God, the servants are the prophets, and the ones refusing their invitation are those who reject Jesus’ invitation to enter God’s kingdom. The point of the first part of the banquet parable is that if you hope to participate in God’s kingdom, you must first accept the invitation. In Matthew’s context, the king’s harsh treatment of the city (“the king was enraged and sent his troops”) alludes to the destruction of Jerusalem and its temple by the Romans in A.D. 70. And the rejection of the invitation by the “A list” people (like the scribes and Pharisees) opens up the banquet guests to include marginal persons (like tax collectors and sinners) and eventually even Gentiles.

The second part of the parable (which may well have once been a separate parable) insists that it is not enough merely to gain entrance to the banquet hall. Once there, you must behave in an appropriate manner. What if you had been invited to the White House for dinner and arrived in clothes that you normally use for yard work or painting? You would probably be asked to leave. The point is that having been admitted to God’s kingdom by faith and baptism, we will be expected to act in ways that befit who we have become “in Christ.”

The Eucharist we celebrate as the sacrament of ongoing Christian life stands in the biblical banquet tradition. It is the banquet of God’s Son and points toward fullness of life in God’s kingdom. But it is not enough simply to show up. Rather, we need to participate actively, let the mystery of the Eucharist shape our identity, and we must act appropriately in our everyday lives.

The excerpts from Paul’s awkward “thank you” note in Philippians 4 can help us grasp better the proper framework for appropriate Christian action. In words often compared to the teachings of Stoic philosophers, Paul first offers a classic statement of independence and self-reliance: “I have learned, in whatever situation I find myself, to be self-sufficient.” Yet Paul was more reliant on God than on himself: “I can do all things in him who strengthens me.” Moreover, in carrying out his mission to found new communities all over the Mediterranean world, Paul relied on a team of co-workers. And he praises the Philippians for sharing his distress during imprisonment and for sending him some kind of gift. Paul’s example indicates that at its best, Christian life combines self-reliance, reliance on God and reliance on others.

This article also appeared in print, under the headline “God's Banquet,” in the October 6, 2008, issue.