The Success of Nick D'Aloisio 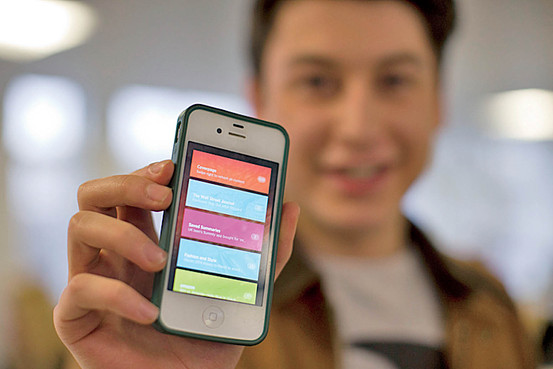 In 2008, Nick D'Aloisio began designing iPhone apps. He was 12 years old, "working," reports the Wall Street Journal," on a Mac in his bedroom in the London district of Wimbledon."

He had taken "no formal computer science classes at school, and neither of his parents . . . knew much about tech. Instead, he learned how to program almost entirely by himself, scouring websites and watching instructional videos."

According to the Journal, when he “wasn’t programming or doing schoolwork,” he began

reading about natural language processing. He’d studied language as diverse as Latin and Mandarin, and became fascinated by concepts like grammatical frameworks, morpheme parsing and the 1960s work of the linguist Richard Montague.

As he scanned the Internet for knowledge, D'Aloisio decided that what he really needed was a better way to determine, at a glance, what was worth reading. He envisioned a summarization tool that used language theory to give a meaningful synopsis in fewer than 400 characters.

D’Aloisio discovered that his affinity for software and language could create exactly what he needed. Thus was born Summly, an app that relies upon statistical natural language processing to summarize chunks of text into representative sentences.

D’Aloisio’s story is fascinating for many reasons but especially for what it tells us about the contours of twenty-first century education. I see students like D'Aloisio (perhaps not as advanced, but very gifted nonetheless) where I teach. Not old enough to drive, these young minds are building computers, designing video games, making and editing films and innovating in ways that amaze. As in D'Aloisio's case, many of their breakthroughs arise from work outside of school, outside of formal assignments and the courses that colleges recognize. Some of their best work results from Google searching and YouTube tutorials as they chase down their natural curiosities.

When I read about students like D'Aloisio, my instinct is not to say, "They don't need school," but to wonder instead how to make school worth their time. What kind of curriculum harnesses the ingenuity and brilliance of someone who creates Summly? What kind of schedule and what kind of learning spaces empower the growth of similar ideas? And, going further, how does a Catholic school integrate and challenge these kids? How do you inspire those who live on the cusp of the future to embrace something ancient? How do you motivate the developer of the latest app to care about the work of the cross? I believe there's a way, but I think it's a way that needs further imagining.

One preliminary answer centers on the importance of giving students unstructured time -- freedom to pursue what they naturally love. This is a delicate task, because not all students are mature enough to handle it. Study hall quickly becomes text messaging hall. Addtionally, not all students will have the ideas or the willpower to launch companies or products. But with the right students, with students who possess brilliance and intrinsic motivation, a couple hours a day to pursue entrepreneurial projects could make school far more captivating. And it could lead to genuine achievements in technology, design, business or the arts.

Successes like D'Aloisio's also highlight the importance of studying a variety of subjects, even those that might not, at first, meet the world's definition of practicality. Where would D'Aloisio be if he didn't chase down his interest in grammar, if he didn't explore Mandarin or Latin? Summly's algorithms resulted from a combination of math, linguistics, computers, and coding. Our students should receive similar encouragement to study widely, to avoid thinking of themselves as only a math person or only an English person. Students should not typecast themselves into one academic role, but instead pursue different interests without fear, letting the natural course of things reveal what will eventually command most of their time.

D'Aloisio's project also shows the value of experimentation, the fruits of trial and error. Summly didn't happen because of one lucky guess. Years of tinkering and thinking fueled D'Aloisio's final product. Schools, too, need to allow for this trial and error and not try, so quickly, to gauge everything by a GPA or a standardized test. Sometimes we make progress even when we have nothing to show for it. Sometimes repeated false starts bring us to the breakthrough.