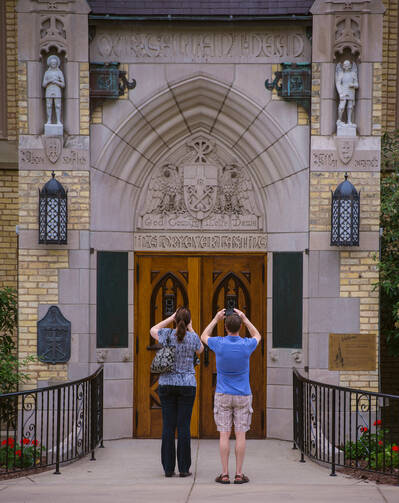 In recent days, as I wrote about last week, the University of Notre Dame announced an extraordinary campus expansion. In what Notre Dame officials are calling “the largest building project in its 172-year history,” the school will add more than 750,000 square feet in three new buildings attached to Notre Dame Stadium. According to the University press release, the $400 million expansion will provide space for a recreation center and career center; the anthropology and psychology departments; a digital media lab; and the Department of Music and the Sacred Music at Notre Dame program. The addition will also provide 3,000 to 4,000 priority seats for football games. The University calls it the “Campus Crossroads Project.”

When I first heard of the University’s intentions, my first reaction was similar to many others, a reflexive “wow” at the magnificence of the project and a marveling at the cost. But it would be a mistake to see the Campus Crossroads project as a mere expansion, as simply another sign of progress at a leading school. In implementing the Crossroads project, Notre Dame is making a dramatic statement about the nature and future of education.

To understand why, one has to understand the landscape of modern education. An array of voices and forces are destabilizing the traditional university model, the model that has sustained Western culture for hundreds of years. This model features a centralized campus uniting academic departments, athletic programs, and all the activities, offices and services that coalesce into a teeming community. It has evolved, today, into the model of large quads, dorm life, and the frenzied gamedays of college sports. It's the "total immersion" model, whereby the learner fully situates him- or herself in an educational community.

It’s the model that still defines college life in the United States, and moving away to such a place stands as one of the few American rituals marking the transition from adolescence to adulthood.

But in the last few years, the Hubble-like reach of the internet has reconfigured the status quo. YouTube and hundreds of other web sites provide cheap, quick and effective ways to gain knowledge. By the time students step foot in high school, many have acquired skills and aptitudes that, ten years ago, would have required thousands of dollars and a college degree. The rise of Massive Open Online Courses (MOOCs) has enabled people from around the world to access lectures and coursework formerly offered only on a specific campus, often at a prohibitive cost. As a result, many wonder whether the classic college experience is necessary. If you can take Introduction to Psychology online for free, why sit in a 100-person lecture hall where the professor doesn't know your name?

Not surprisingly, some look at these developments and conclude the traditional model is heading the way of the VCR. As Nathan Harden wrote in the January-February 2013 issue of The American Interest, “The future looks like this: Access to college-level education will be free for everyone; the residential college campus will become largely obsolete; tens of thousands of professors will lose their jobs . . .”

Into this milieu, into the winds of this pessimism, comes the bold vision of Notre Dame. Notre Dame is one of the country’s most important Catholic schools. Notre Dame’s decisions influence not only other Catholic colleges, but high schools and primary schools. People look to Notre Dame for what Catholic education is and what it should be. What are some lessons, what are some insights, from Notre Dame’s Crossroads project?

(1) Notre Dame's Crossroads project expresses total confidence in the viability of the residential college system; not necessarily in all residential college systems, but at least in the residential system that Notre Dame offers. Though online learning venues will continue to grow, Notre Dame is not abandoning the merits of being on campus. University officials believe that living and studying at Notre Dame delivers benefits that cannot be gained elsewhere -- and that students will continue to pay for it. Notre Dame is optimistic that students will continue to seek the fellowship and edification that can only be gained in community. This doesn't mean that online alternatives have no value, but it does indicate Notre Dame's belief that there is no substitute for an environment dedicated to a vibrant, consistent pursuit of truth, where scholars from disparate fields regularly converse with one another about the commonalties of their endeavors.

(2) The Campus Crossroads project expresses the classic Catholic belief in the unity of knowledge. In higher education, this truth is by no means assured. In his book God, Philosophy, Universities, philosopher Alasdair MacIntyre observed that in today’s research universities, “the curriculum has increasingly become one composed of an assorted ragbag of disciplines and subdisciplines, each pursued and taught in relative independence of all the others, and achievement within each consists in the formation of the mind of a dedicated specialist.”

While I wouldn't say the Crossroads project solves all of MacIntyre’s concerns, I do think it’s a move toward integration and away from specialization. Notre Dame Stadium will no longer stand in isolation as a cathedral of competition, as something apart from or better than the rest of the University. The football stadium will now be connected to Notre Dame’s Sacred Music program, which will be connected to the psychology and anthropology departments. Notre Dame is making a statement that all of these fields of study relate. Somehow, pads and helmets connect with the notes of a High Mass.

This is pretty remarkable. When hundreds of thousands of visitors flock to the Stadium after completion of construction, they will no longer be attending games in a temple of sport. They will be heading, in part, to an academic building, to one that holds study spaces for students and offices for professors. Connecting athletics, academics and spirituality signals to a visitor that Notre Dame football is set against a broader horizon of activity and meaning. Athletics, in other words, is one of many pursuits through which the human being realizes the dignity of his or her creation.

I don't mean to suggest that Notre Dame alone advances these beliefs. I imagine there are other Catholic schools with similar (and equally laudable) projects afoot. But it's really heartening to see an institution as well known as Notre Dame undertake such a prominent, innovative move in service of an on-campus education and the unity of the human experience.

Matt Emerson
Show Comments (
1
)
Comments are automatically closed two weeks after an article's initial publication. See our comments policy for more.
Anne Danielson
8 years 2 months ago
The truth is one, whether we acknowledge truth is one or not. We are called to contemplate the unity of the human experience in light of our Catholic Faith. Information that is not grounded in truth, is based upon faulty premises. Perhaps this project will lead us away from the temptation to worship in a temple of sport, but at the end of the Day, if anthropology and psychology are not in communion with Catholic spirituality from The Beginning, you have merely substituted one false god for another and called it academics. A human person, can only conceive a human person; from the moment of conception, nothing has been added to or subtracted from the DNA of the son or daughter of a human person, thus from the moment of conception, regardless of what some anthropologists may claim, a human person is wholly human. You have been you, and I have been me, from the moment of our conception. From the moment of our conception, we are in being, a son or daughter; not an object of sexual desire/orientation, regardless of what some psychologists may claim. From the moment of conception, every human person has been created in The Image and Likeness of God, equal in Dignity, while being complementary as a son or daughter, Willed by God, worthy of Redemption, because every human person is Loved by God. Academics, if they desire to know what is true, will not deny the truth about The Sanctity of Human Life, and The Sanctity of Marriage and The Family from the start; if one wants to realize the Dignity of his or her own creation, one must begin at The Beginning.