A Breakthrough Book: Pope Benedict and his 'Introduction' 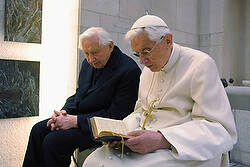 Posting, as I’ve done recently, about spiritual autobiographies has got me thinking about one of the most influential books I’ve ever read in any genre: Pope Benedict XVI’s Introduction to Christianity.

Published in 1968, when Pope Benedict was Cardinal Ratzinger, I read it first about seven years ago, in my mid-twenties, at about the time I was finishing law school. I have returned to it regularly ever since. My copy contains dozens of pages marked by highlighting and underlined sentences. I’ve quoted chunks of its text in emails and articles, and I’ve recommended it to nearly everyone who has asked me for a good book about the Catholic faith.

I could write dozens of pages about why it’s been so meaningful, but for the sake of space and time, I’ll just mention one here.

The book freed me from the pursuit of certainty. It freed me from assuming that to be a person of religious faith, to be Catholic, I had to aspire to be free from doubts. At the time I read it, I was nearing the end of law school, and I had spent the previous thee years immersed in a world of cases and legal principles. Subconsciously, I think I began to try to master my faith like I did the law. If I read enough, if I memorized enough, if I studied enough, I could achieve an invulnerability from the forces that make us waver.

But I couldn’t. I could never settle comfortably into my religious beliefs. As soon as I thought I had, I could feel the pull of other possibilities. In my own way, I probably asked: Is this all really true? Is He really there?

When I started Introduction to Christianity, I am not sure exactly what I expected, but almost immediately it left me stunned. This was no commonplace overview of the Christian faith. This was no clichéd recitation of standard positions. Right away, in the opening pages, Cardinal Ratzinger took the biggest difficulty head on.

“First of all,” he wrote, “the believer is always threatened with an uncertainty that in moments of temptation can suddenly and unexpectedly cast a piercing light on the fragility of the whole that usually seems so self-evident to him.” In those moments, he said, “What is at stake is the whole structure; it is a question of all or nothing. That is the only remaining alternative; nowhere does there seem anything to cling to in this sudden fall. Wherever one looks, only the bottomless abyss of nothingness can be seen.”

I had not reached the kind of "abyss" he spoke of, but with those lines it became clear to me: whatever this book is, it’s not going to be filled with platitudes. It would not evade the difficulty of faith. Its starting point was the subjective situation of the believer, a situation that allowed for extraordinary achievements of human reason, but achievements embedded within contingent minds. In one of the most memorable passages, Ratzinger observed:

Just as the believer is choked by the salt water of doubt constantly washed into his mouth by the ocean of uncertainty, so the nonbeliever is troubled by doubts about his unbelief, about the real totality of the world he has made up his mind to explain as a self-contained whole. He can never be absolutely certain of the autonomy of what he has seen and interpreted as a whole; he remains threatened by the question of whether belief is not after all the reality it claims to be. Just as the believer knows himself to be constantly threatened by unbelief, which he must experience as a continual temptation, so for the unbeliever faith remains a temptation and a threat to his apparently permanently closed world. In short, there is no escape from the dilemma of being a man.

Those lines, that opening chapter: it all hooked me. I didn't have to be certain. I didn't have to eliminate all doubt. I could acknowledge the challenge of religious belief and do so without feeling guilty, without feeling like my faith was defective. But in so doing, in making this recognition, there was a paradox: my faith increased. My peace increased. Liberated from the pressure of perfection, aware that no set of convictions was invulnerable, I relaxed. I could work patiently through the questions and not force answers. I could accept the "dilemma of being a man" and use that dilemma as an invitation to grace.

Matt Emerson
Show Comments (
6
)
Comments are automatically closed two weeks after an article's initial publication. See our comments policy for more.
Bruce Snowden
8 years 1 month ago
I too read "Introduction To Christianity" but at the height of the clergy sex abuse of youth scandals and in Chapter 2 pg. 338 under the sub-title, "The Holy Catholic Church" here's what Pope Emeritus Benedict XVI said in part. "We are tempted to say, if we are honest with ourselves, that the Church is neither holy nor catholic; the Second Vatican Council itself ventured to the point of speaking no longer merely of the holy Church, but of the sinful Church and the only reproach it incurred was that of still being far too timerous so deeply aware are we of the sinfulness of the Church. Benedict continued. "the centuries of the Church's history are so filled with all sorts of human failure fhat we can quite understand Dante's ghastly vision of the Babylonian whore sitting in the Church's chariot." And more! Wow! God bless Benedict XVI the Apostle of Truth, knowing that "The truth sets you free."
Matt Emerson
8 years ago

Bruce -- thanks for reading and commenting. The passage you mention is quite powerful.

Gregory Lynch
8 years ago
Outstanding article. "Introduction to Christianity" is one of the most influential books in my spiritual journey also. The content and the style were refreshing and unlike any other theological book I had read. I was born a Catholic and drifted away from the Church during my 20s and early 30s. I read "Introduction to Christianity" during a period of personal spiritual turmoil and it was a life-changing experience that helped open my soul to the richness of Catholicism. Pope Benedict's / Joseph Ratzinger's style of posing the difficult questions of belief and Christianity and addressing them openly and comprehensively were almost like I was having a conversation with him where he was anticipating my objections and answering them in a humble and sincere manner coupled with tremendous intellectual depth. In addition to Ratzinger's outstanding treatment of the relationship between faith and doubt which you summarize well, I was especially impressed by Ratzinger's ability to put Christianity in a historical context, his embracing of the evolutionary theology of Teilhard de Chardin (which Ratzinger later expanded upon in "The Spirit of the Liturgy") and the emphasis on the interconnectivity of all humanity. In large part due to reading of "Introduction to Christianity" I caught fire with the Faith and have started a blog that includes many references to Ratzinger's writings in "Introduction to Christianity", ranging from embracing doubt to grow into a mature faith (http://wp.me/p3pJsV-1Y) to interpreting the theology of the movie Gravity (http://wp.me/p3pJsV-A4)
Matt Emerson
8 years ago

You write: "Joseph Ratzinger's style of posing the difficult questions of belief and Christianity and addressing them openly and comprehensively were almost like I was having a conversation with him where he was anticipating my objections and answering them in a humble and sincere manner coupled with tremendous intellectual depth."

James Day
8 years ago
Really excited to see this and your insights and enthusiasm for it. I had the same reaction when I opened it myself and couldn't put it down. I found his section "descended into hell" especially moving. One note, though - he wasn't created cardinal until 1977.
Matt Emerson
8 years ago

James -- thanks for your comment and the note about the date. I will make the edit.