Alice in Wonderland at 150

Alice in Wonderland at 150 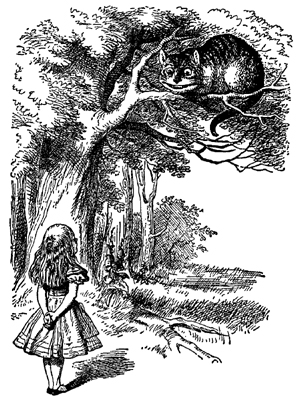 Life’s most important lessons are learned in childhood. And, sometimes, from cats. Consider this insight, first gleaned 150 years ago, this year, by a girl named Alice. A Cheshire Cat tutored her in a place called Wonderland.

The Cat only grinned when it saw Alice. It looked good-natured, she thought: still it had very long claws and a great many teeth, so she felt that it ought to be treated with respect.
“Cheshire-Puss,” she began, rather timidly, as she did not at all know whether it would like the name: however, it only grinned a little wider. “Come, it’s pleased so far,” thought Alice, and she went on, “Would you tell me, please, which way I ought to go from here?”
“That depends a good deal on where you want to get to,” said the Cat.
“I don’t much care where—”said Alice.
Then it doesn’t matter which way you go, said the Cat.
“—so long as I get somewhere,” Alice added as an explanation.
“Oh, you’re sure to do that,” said the Cat, “if you only walk long enough.”
Advertisement

How we picture life, and our place within it, matters a great deal. When it comes to ourselves, it just won’t do to imagine ourselves as little, isolated spots, especially not if we also see ourselves as the center of the world. We aren’t spots. Indeed, it would be better to think of ourselves as trails, because there’s never in a moment in life, save the first, when we’re not coming from somewhere or on our way to someplace else. That’s what it means to be human: to journey. And, as the Cheshire Cat taught Alice, where you want to go matters greatly, because, if you don’t know, you’ll never get there.

One could say, and one wouldn’t be far from the mark if one did, that the purpose of faith is to plot the future. Religion is all about what we want to be and where we want to go. The person who lacks purpose wanders aimlessly in life. Vital energies are misspent in meandering. At the very beginning of The Inferno, Dante offers a stark image of what it means to stray.

Midway upon the journey of our life
I found myself within a forest dark,
For the straightforward pathway had been lost.
Ah me! how hard a thing it is to say
What was this forest savage, rough, and stern,
Which in the very thought renews the fear.
So bitter is it, death is little more…

He’s right about that. To be lost, not to know what you want out of life, where you want to go, with whom you want to walk, isn’t only the worst imaginable life. It very accurately describes hell: to wander alone and never to find one’s way.

Creation serves and glorifies God, but we alone are that part of creation that must choose to do so. Creation came about through the will of God. In contrast, the Kingdom of God humbles itself before the human will. We must decide, we must say “yes” to that which God seeks to accomplish. We either go somewhere with a purpose or we meander into muddles that tire and torment us.

The Prophet Amos knew who he was and where he was going, because he knew that he had been summoned. With no little indignation he could reply to Amaziah

I was no prophet,
nor have I belonged to a company of prophets;
I was a shepherd and a dresser of sycamores.
The Lord took me from following the flock, and said to me,
Go, prophesy to my people Israel (7: 14-15).

Our paths make us humans. They tell us where we’ve come from and who we are becoming in the sight of the Father, who awaits us at trail’s end. To be human is to have a destiny. We are summoned and sent.

Jesus summoned the Twelve and began to send them out two by two
and gave them authority over unclean spirits.
He instructed them to take nothing for the journey
but a walking stick—
no food, no sack, no money in their belts.
They were, however, to wear sandals
but not a second tunic (Mk 6: 7-9).

The Twelve have names, which we remember. Their identities, their trails matter.

In Baptism we enter the Church. We are called by name, given an identity, and sent on mission to others who must also be called and confirmed. Only companions, those with whom we break bread, can complete the self, can help it to find its way.

In him we were also chosen,
destined in accord with the purpose of the One
who accomplishes all things according to the intention of his will,
so that we might exist for the praise of his glory,
we who first hoped in Christ (Eph 1: 11-12).

In its essentials, the church isn’t a structure or an institution, though each of these is an important part of what it means to be church. Ultimately, to be church is to be companions on the way, a people who know where they want to go and just why it is that they must go together.