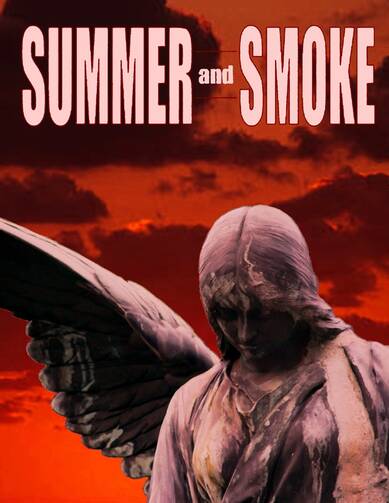 One of the most tragic, yet telling, lines in America theatre, is delivered at the end of Tennessee Williams’ play “Summer and Smoke.” Alma Winemiller, the fallen daughter of the local minister, in Glorious Hill, Miss., tries to seduce a travelling salesman. Poor Alma herself has travelled such a distance. Early in the play she argues with a sensual young physician, comparing the soul to a gothic cathedral in which “everything reaches up, how everything seem to be straining for something out of reach of stone—or human-fingers…all reaching up to something beyond attainment.”

But Alma’s faith has never really been tested. It’s easy for her to judge the young doctor as a shallow empiricist. By play’s end, she and the doctor have changed places. He’s convinced that he has a soul, while her final words bespeak her own most sorrowful need. Referring to her sleeping pills, she says “You’ll be surprised how infinitely merciful they are. The prescription number is 96841. I think of it as the telephone number for God.”

Last summer, in preparation for the church’s Jubilee Year of Mercy, Pope Francis gave an interview to the Italian journalist Andrea Tornielli, who asked him, “Why, in your opinion, is humanity so in need of mercy?” The Holy Father's response is published in The Name of God Is Mercy (2016).

Because humanity is wounded, deeply wounded. Either it does not know how to cure its wounds or it believes that it’s not possible to cure them. And it’s not just a question of social ills or people wounded by poverty, social exclusion, or one of the many slaveries of the third millennium. Relativism wounds people too: all things seem equal, all things appear the same. Humanity needs mercy and compassion. Pius XII, more than half a century ago, said that the tragedy of our age was that it had lost its sense of sin, the awareness of sin. Today we add further to the tragedy by considering our illness, our sins, to be incurable, things that cannot be healed or forgiven. We lack the actual concrete experience of mercy. The fragility of our era is this, too: we don’t believe that there is a chance for redemption: for a hand to raise you up; for an embrace to save you, forgive you, pick you up, flood you with infinite, patient, indulgent love; to put you back on your feet. We need mercy (16-17).

Pope Francis suggests that much of our urgency for God’s mercy is our own inability to see our need for it. That is, of course, the nature of sin. It blinds us, confuses us, make the unreal seem right, acceptable.

The tender grace, the woeful beauty, of Alma’s last line is her recognition that she seeks mercy from an idol, from one of the many ways that modern men and women salve their souls. “You’ll be surprised how infinitely merciful they are. The prescription number is 96841. I think of it as the telephone number for God.”

Jesus comes to Capernaum to preach God’s mercy, but the people do not recognize their need for it. They want God to be manifested among them in power. They do not realize that their desire would reduce the living God to only one more power within the world, one which they can claim as their own. If only they would open themselves to him. If only they would look within and see the emptiness.

Francis says, “The first thing that comes to mind is the phrase, ‘I can’t take it anymore!’ You reach a point when you need to be understood, to be healed, to be made whole, forgiven” (31). Frustration can be a manifestation of sin, personal sin, because sin is a negation of God’s goodness, God’s life and power. If moderns no longer know what the word “sin” means, perhaps they should search their lives for frustration. It would help them find the wound.

If you are not capable of talking to your brother about your mistakes, you can be sure that you can’t talk about them with God, either, and therefore you end up confessing into the mirror, to yourself. We are social beings, and forgiveness has social implications; my sins wounds mankind, my brothers and sisters, and society as a whole. Confessing to a priest is a way of putting my life into the hands and hearts of someone who in that moment acts in the name of Jesus (21-22).

“Alma” is Latin for “soul.” Tennessee Williams understood that her sin, her sorrow, was the story of the human race, seeking in frustration a solace that only God can give. “You’ll be surprised how infinitely merciful they are. The prescription number is 96841. I think of it as the telephone number for God.”

Terrance Klein
Show Comments (
4
)
Comments are automatically closed two weeks after an article's initial publication. See our comments policy for more.
William Rydberg
6 years 6 months ago
I'm sorry,but I do not read how this article ties in with the Good News of the Incarnate Son of God coming in Power? In my opinion it would be more helpful to us readers if there was some significant connection to the readings. In my opinion the homiletic should tie in to the readings. Otherwise it's a literary exercise...
Monica Doyle
6 years 6 months ago
I sometimes regret that I didn't have a more well rounded liberal arts education. But when I read America, especially this article today, I feel I am receiving the rich education I missed out on in my early years. Thank you for this. I never knew "Alma" was Latin for soul until now.
Linda Cleary
6 years 6 months ago
This is a wonderful reflection. I especially related to the advice to look at your frustrations. Frustration is felt when things don't go the way we want or intend them to. It is a reminder things aren't necessarily supposed to go our way, but God's way. If we were more in tune with going with God's flow instead of our own we would not feel frustrated.Once I look at what is keeping me from letting go and letting God i discover the selfishness ruling my life at the moment.
Bert Clere
6 years 6 months ago
I love this play and it's great to see it discussed in a religious context. Williams biographer Donald Spoto titled a chapter on Williams early life, "In the shadow of the church." His plays are certainly haunted by the shadow of God.