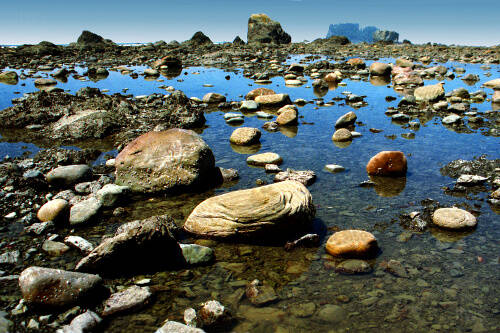 Again, the kingdom of God is like a net thrown into the sea, which collects fish of every kind. When it is full, they haul it ashore and sit down to put what is good in buckets. What is bad they throw away. (Matt 13: 47-48)

One of my favorite memories of my early teenaged years is a summer evening my father, brother and I spent with my Great Uncle Lew. We called Lew “our funny uncle” because he was always teasing, joking and generally making a dramatic fuss, unlike our own no-drama family. We had gone down to Atlantic Highlands along the North Jersey shore to fish with Uncle Lew and his straight-man, Captain Bill.

In the summer dusk, Uncle Lew took us to the Shrewsbury River, a tidal river near Sandy Hook, where he unpacked a seine-net and announced we were about to catch bait fish for our early morning fishing trip. My brother stood on the shore, and I took the other end of the net out in a great arc out into the river and gradually walked back to the shore, where together we hauled in the net and its catch. Not a fisherman myself, I was amazed at the variety of sea-life we hauled in: shrimp, hard-shell crabs, soft-shell crabs, seahorses, starfish and, of course, the bait fish.

Whenever I hear the short parable of the dragnet “which collects fish of every kind,” I think of that twilight fishing venture. And when we returned home, just like the fisherman in the parable, we sorted the catch, “putting what was good in buckets” and throwing out the rest.

The parables we hear today are all about the kingdom of God. Some are about the singleness of heart needed to storm the kingdom. The parables about the seine-net and the householder, though, have a different theme—the diversity of the kingdom. The new community Jesus was gathering around him was made up of all sorts of people: Simple fishermen, women of independent means who follow Jesus about and support him, men and women he has healed, aspiring young people whom he inspires to follow him, curious religious leaders like Nicodemus and Joseph of Aramathea,

tax-collectors like Matthew and Zaccheus, religious searchers for who find Jesus teaches with a natural authority, pious Jews waiting for the redemption of Israel. The Jesus Movement, as scholars called it, was a multifarious multitude of unlikely fellow-travelers.

The parable has two messages for us. The first is that the new community God is gathering around Jesus is an inclusive one. It involves all sorts of people, who ordinarily would not come together. They represent the diversity of God’s creation and the inclusiveness of divine love, which has no favorites.

The second lesson is that any sorting out is God’s business, not ours. Judging who’s good and who’s bad is a task for God, not for us. God will sort out which sea-creatures get rejected and which get saved. Today’s gospel, like the parable of the wheat and the tares last week, urge us to leave judgment to God, something devout people are too often reluctant to do.

The parable of the seine-net is especially meaningful for us today, when people are all over the map religiously. It is often not easy for us to find our family members have dropped out of the church or to hear members of the younger generation talk of themselves as “spiritual but not religious.” Sometimes we are dismayed by Cafeteria Catholicism among our friends and acquaintances

At other times, when we are honest with ourselves, we must admit that we pick and choose ourselves, or at least we pay more or less attention to different things the church teaches. As a practical matter, it is not human for people to evaluate everything equally; we all have our characteristic preferences. Religiously speaking an overly prescribed religious profile is an obstacle to accepting the personal gifts the Spirit has given each of us.

Pope Emeritus Benedict in a book published early in his pontificate compared the church to the tree grown from the mustard seed in which all the birds of the air find their home. The point he wanted to make was that the Church is a lot bigger than the community of professional Catholics. “Perhaps the Church has forgotten,” he wrote, “that the tree of the Kingdom of God reaches beyond the branches of the visible Church, but that this is precisely why it must be hospitable place in whose branches many guests find solace.”

Then, he went on to say something quite remarkable, especially for Benedict who is thought of as an enforcer of orthodoxy:

I would say that both secular people and Catholics, seekers and believers, in the dense thicket of the branches filled with many birds, must move toward each other with a new openness. Believers must never stop seeking, while seekers are touched by the truth and thus cannot be classified as people without faith. . . There are ways of partaking of the truth by which seekers and believers give to and learn from each other (“Without Roots,” 23).

Pope Francis has begun to act on that belief, making the church approachable and hospitable for people of all sorts: for long-time anti-clericalists, for single mothers rejected by their pastors, for spurned homosexuals, for homeless people of the streets, for men and women badly mistreated by the Church. As he likes to say, he is showing that the church should be “like a field hospital,” where people’s wounds are tended without hard questions being asked.

Pope Benedict opened the way to a Big Tent Catholicism with his image of the branches of the tree providing a home to believers and seekers alike. Pope Francis has gone further urging that the catholicity of the church is found in the variety and multiplicity of peoples. He means in the first instance the diversity of all the eastern churches with their own languages, historic cultures and distinctive rituals. He intends to include “new syntheses” of popular piety with the cultures of our own day. But, finally he means to include “all those who,” in the words of liturgy, “seek [God] with a sincere heart” (EP IV). He is asking us all to embrace all those who don’t fit our usual expectations of orthodox religious belief and practice, but nonetheless are searching for God.

“We must have sincere trustin our fellow pilgrims,” Pope Francis wrote in “The Joy of the Gospel,” “putting aside all suspicion or mistrust, and turn our gaze to what we are all seeking: the radiant peace of God’s face” (244). We need to encourage others in their searching and their good works. We need to surrender our impulse to judge others, and, as Jesus repeatedly taught, leave judgment to God. We need also to appreciate as Pope Benedict proposed that the Kingdom of God is more encompassing than “the visible church.”

The international lay movement Focolare seems to have understood that need intuitively. Their particular vocation is to promote unity, and for that reason they welcome all sorts of people to share their life and enjoy the hospitality of their communities like Mariapolis Luminosa outside Poughkeepsie, New York. There you’ll find diocesan priests and religious of other communities who are friends of the community. But there will also be Muslims, searchers and agnostics, who have been won over by the charity of the Focolarini and the hospitality of their settlements. In their inclusive love, Focolarini are modeling the unity-in-diversity that is the Kingdom of God in which the institutional church hasn’t always shared but which ideally it should.

In the remaining days of summer, I recommend you take your children, grandchildren, even your nieces and nephews, one evening along the shallows of the Merrimac or to Ipswich Bay and see what your dragnet will harvest from the sea. If you don’t have a seine-net, tide-pooling will yield a lot of surprises too. Go, do it for the shear wonder of it; do it for the science lessons you’ll find there, and do it as well to appreciate more deeply the wisdom of today’s Gospel. God’s world and God’s church are richer in life than we ever dreamed of. A gospel lesson is waiting for you there—at the water’s edge.

Drew Christiansen
Show Comments (
2
)
Comments are automatically closed two weeks after an article's initial publication. See our comments policy for more.
Monica Doyle
7 years 10 months ago
I need to engrave what you wrote on my heart. Loved the reference to The Focolare Movement. I attended their summer Mariapolis two weeks ago, and they do model unity-in-diversity like no other.
John Fitzgerald
7 years 9 months ago
I don't know if I've ever met a non-cafeteria Catholic. In my experience, those who pay most attention to dogmatic matters often ignore the social teachings. Human beings tend by our nature to pick and choose but also tend not to see it in ourselves. I consistently miss the beam in my eye.